Soccer Formations - 9 Of The Best Explained 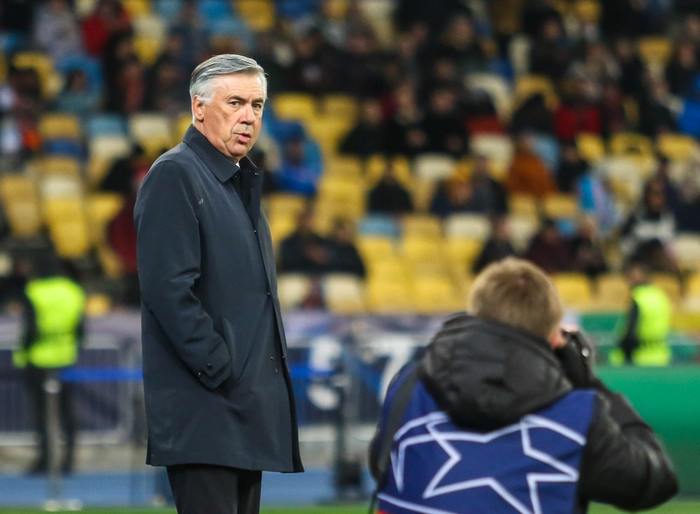 Soccer formations can vary immensely depending on factors like personnel, opposition, and preferred style of play. If you take a look at the world's top leagues, you'll find that there are a few core formations coaches opt for. So which ones are the best? In this article, we'll take you through 9 of the most used soccer formations, explaining the uses, benefits, and weaknesses of each. Let's begin.

We'll start with one of the most popular formations around. Both Liverpool and Manchester City have enjoyed serious recent success using the 4-3-3 formation. It's often favoured for the balance it offers between defence and attack, allowing teams to dominate possession and press the opposition high up the pitch. Our article on The 4-3-3 formation and its uses, benefits, and weaknesses delves into this shape in a lot more depth.

Originally developed by Argentine coach Carlos Bilardo as a way of creating space up front for legendary attacker Diego Maradona, while simultaneously ensuring defensive solidity, this formation led Argentina to 1986 World Cup triumph. In recent years, the 3-5-2 formation has become fashionable again, due largely to its immense flexibility. 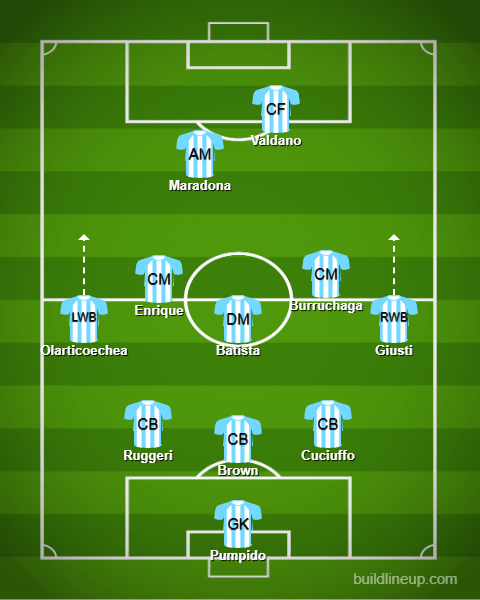 Argentina's lineup for 1986 World Cup Final, where they went on to defeat West Germany 3-2

Spain's footballing world domination between 2008-12 helped pioneer this system, which is made up of a back four, 2 defensive midfielders, and a creative midfield 3 operating behind a lone central striker. Its often used by possession-oriented sides. 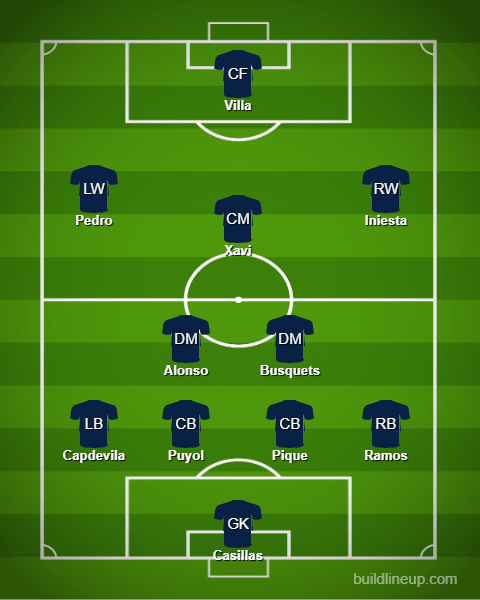 Often regarded as one of the greatest national sides of all time, this 4-2-3-1 lineup led them to World Cup victory in 2010, thanks to Andres Iniesta's extra-time winner

The 4-4-2 formation was the go-to system for English sides from the advent of the Premier League in 1992 until the rise of 4-2-3-1 in the late noughties. It usually revolves around a solid back four, a midfield four comprised of two central players and two wingers, and an attacking partnership of 2 central strikers. These days, it's a little out of fashion, but it still has its benefits. 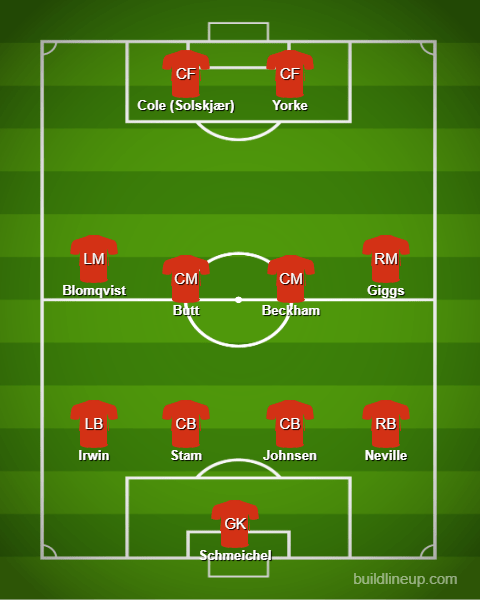 In arguably Alex Ferguson and Manchester United's finest moment, this 4-4-2 setup overcame a strong Bayern Munich side to Champions League glory in 1999.

A less orthodox formation, 4-3-2-1 is often described as "The Christmas Tree" due to its shape when displayed on a team sheet. It's essentially a variation of 4-5-1, designed to pack players into key areas of the pitch and progress the ball forwards effectively. 4-3-2-1 consists of 4 defenders, 3 central midfielders, 2 attacking midfielders, and a lone central striker.

With four defenders, 5 midfielders, and one striker, this formation is more focused on width than other 4-5-1 variations we've discussed previously. It spreads bodies across the midfield and encourages these players to support their lone striker as much as possible. 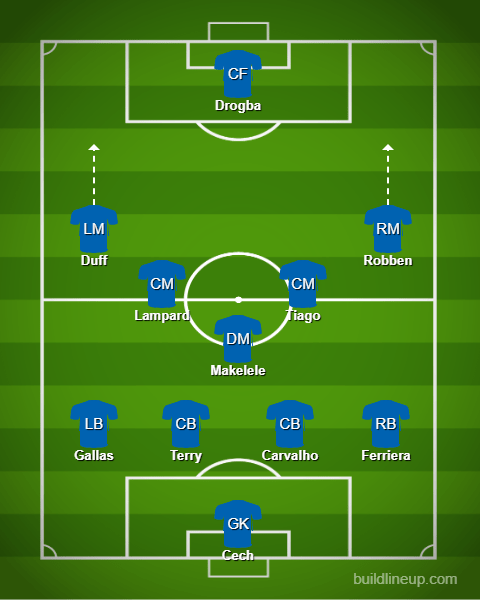 This 3-man defence system places greater emphasis on stationing attacking players high and wide in support of a lone striker. With 3 central defenders, a midfield 4 containing 2 wide players, and a front 3 including wingers, this formation is built around developing width and stretching the opposition. It requires a strong balance in the centre of the field, with an energetic box-to-box midfielder typically being complemented by a deeper-lying, more defensive midfielder. 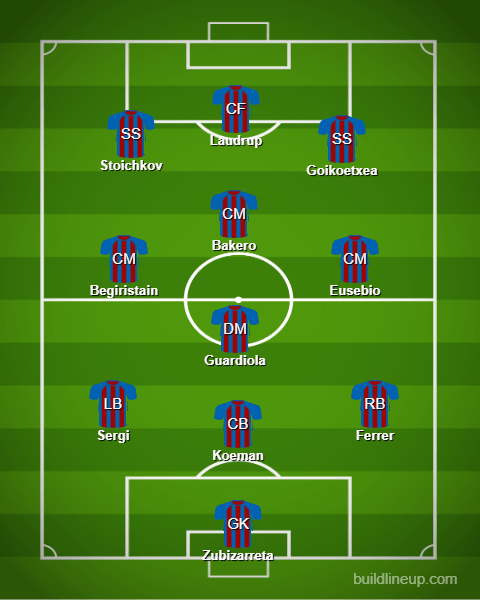 Based on his Total Football philosophy, Cruyff's Barcelona were incredibly fluid, constantly switching positions and moving the ball

Out of all the formations we've discussed in this article, 4-1-3-2 is perhaps the least commonly used one. Typically used by teams looking to dominate the final third of the pitch, 4-1-3-2 is generally seen as a very attacking formation. With just one central defensive midfielder shielding the back four, and five players in relatively advanced areas of the pitch, it can be super effective when it comes to creating chances and exploiting opposition defences. 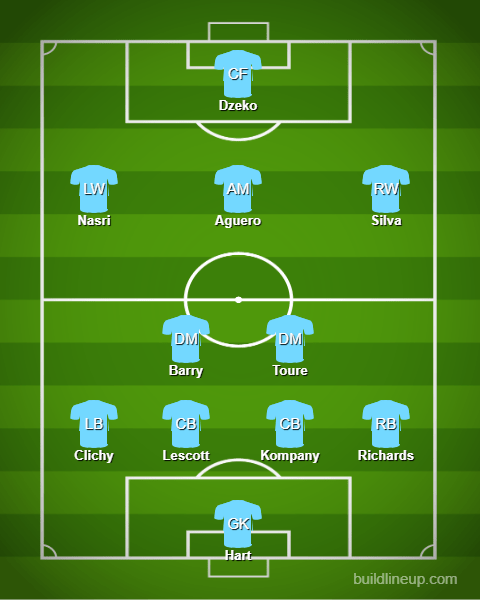 The 4-1-2-1-2 is also often called the "Diamond", due to its midfield shape. With one central defensive midfielder protecting the back four, supported by 2 central midfielders slightly further forward, and one central attacking midfielder positioned behind a strike partnership, this is a super narrow formation. This means width has to be provided by the full-backs. Let's explore how this works in action. 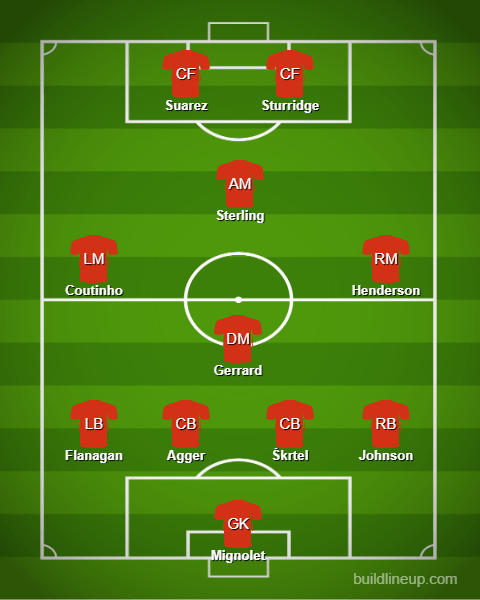 Whilst Rodgers implemented a variety of formations across the campaign, his 4-1-2-1-2 allowed Gerrard to dictate play from deep

That's it for your guide to some of the leading soccer formations. Different shapes and systems are required in different situations, and over the years, formations drift in and out of fashion. Having a grasp of the most popular ones is crucial to understanding the tactical side of the game. If that's something you're interested in, check out our article on 10 great books about football coaching & tactics or check out some more formations we haven't covered above, such as the 4-2-2-2 formation. On the other hand, if you're just looking to develop your knowledge about the basics of our game, our blog is packed with useful explainer pieces. Check out our article, 'How Long is a Soccer Game?' for a comprehensive guide to how matches are structured.