The 4-3-2-1 Formation: Its Uses, Strengths, and Weaknesses 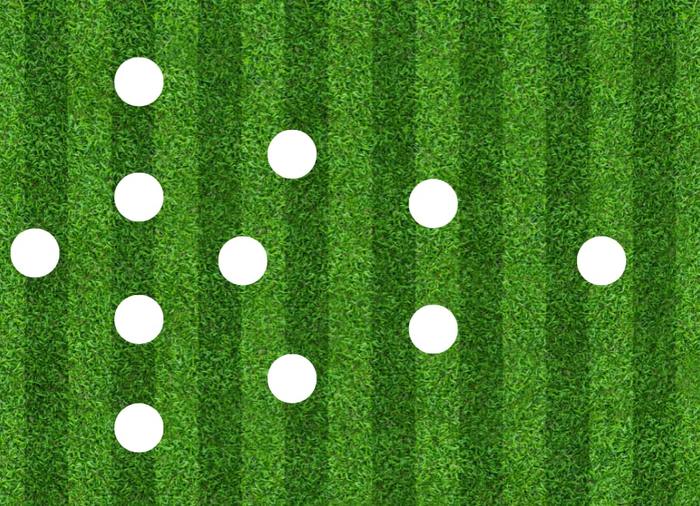 A Champions League final win against Liverpool on 28th May 2022 secured Real Madrid manager Carlo Ancelotti's status as the first-ever four-time European cup-winning coach. The Italian has received plenty of credit for his calm, hands-off approach and excellent man-management skills, but he's also a tactical innovator in his own right.

One of his biggest contributions to the game is the development of the 4-3-2-1 formation, a slightly unusual shape, but one that can lead to great success. In this article, we'll be providing you with a detailed look at this formation. We'll provide some more information about its key uses and benefits, as well as outline its potential weaknesses and exploring the best examples of this formation in action.

A variation of 4-5-1, the 4-3-2-1 formation is designed to pack players into key areas of the pitch, particularly in midfield. It consists of a back four made up of two full-backs and two center-backs, 3 central midfielders with more defensive duties, 2 more advanced creative midfielders, and a lone central striker.

The 4-3-2-1 formation isn't a particularly common one; however, this team structure is more popular than you might think. Often described as "The Christmas Tree" due to its shape when written on a team sheet, it can provide some key benefits, even if it's a less orthodox style than some of the popular soccer formations we've explored previously.

This is considered a reasonably defensive set-up by many, due to the emphasis it places on rigidity and compact structures, and the fact that it uses a 3-man holding midfield, something you rarely see in soccer. However, it can also be an incredibly clever way of setting up a midfield that's capable of dealing with even the toughest of challenges.

Let's get into the key strengths of this formation in some more detail.

While some people have critiqued 4-3-2-1 for its potential rigidity, it can be highly flexible when played right. This is particularly true in advanced areas, where the lone striker will be tasked not only with running the channels, but also with dropping back to contest aerial balls and allow the two attacking midfielders (AMs) to play in the center.

If you're an attacking midfielder, your job is to attack the box or provide width, floating between a variety of different advanced positions and causing confusion amongst opposition defenders. They'll also sometimes drop off and allow the deeper-lying playmakers behind them to lead attacks.

This brings us to the 3-man holding midfield that is so essential to the Christmas Tree shape. These 3 players can take on a wide range of crucial jobs. Generally, the deep-lying playmaker (the most central of the 3) will act as a lynchpin in the middle of the pitch, starting attacks, spraying passes around, and connecting the defense, midfield, and attack. Pirlo is probably the most famous operator in this soccer position (his place within Milan's system led to a huge increase in the popularity of this deep-lying playmaker role).

Meanwhile, the two other midfield counterparts will offer tough tackling, defensive discipline, and tactical ability (in the case of AC Milan, these players were Gattuso and Ambrosini). All in all, having these 5 midfielders, who are all capable of switching positions and playing fluidly, can allow teams to dominate the midfield battle, which is often where games are won and lost.

However, that fluidity comes with a couple of caveats. There's a reason it took some of the greatest players of the modern era to play this system effectively — it's highly demanding. In the next section of this article, we'll explore why it's so difficult to get this formation right, outlining the main weaknesses of 4-3-2-1 and addressing some key areas of vulnerability.

One of the main problems with the Christmas Tree formation is that it can be extremely narrow. With no typical wingers, it can be difficult for teams to create chances and gain advantages in wide areas of the pitch. Instead, the two more central AMs are focused more on attacking through the right or left half-spaces and other middle sections of the pitch.

To counteract this, most teams playing 4-3-2-1 will need to have top-quality full-backs capable of getting forwards, providing attacking width, and crossing balls into the box. Milan's success with 4-3-2-1 relied partly on having Cafu, one of the world's greatest-ever right-backs, while their left wing was controlled by underrated left-back Marek Jankulovski. However, the simple fact is that without world-class players like this, it's difficult to get this formation to function properly.

This is true in various areas of the pitch. For example, the lone striker in a 4-3-2-1 system has an incredibly tough job. Not only do they have to run the channels and battle strongly with opposition defenders, they're also responsible for linking up with the midfielders behind them, dropping off, and using clever movement to allow AMs to advance forwards.

There are a lot of boxes to tick here, so if you don't have a strong, pacey, versatile striker, such as Karim Benzema (who has played excellently in a 4-3-2-1 at Real Madrid), your team may not be able to get the best out of this system.

Midfield congestion is another problem that some teams encounter when lining up with this formation. The Christmas Tree shape essentially works around a central midfield 5, organized into 2 blocks, and unless each player moves cleverly and understands each other's role, it's possible that this area of the pitch can become cramped, and passing options will be blocked. Midfielders should look to counteract this tendency by spreading out and getting into wide areas, particularly the 2 attacking midfielders.

We've already given you a few examples of how Carlo Ancelotti's AC Milan team used 4-3-2-1 to their advantage, but it's worth explaining their formational play in a little more depth. And it's not just Milan — shortly, we'll draw on a few other prominent examples of coaches and teams that have taken advantage of the Christmas tree formation. Let's dive into it. 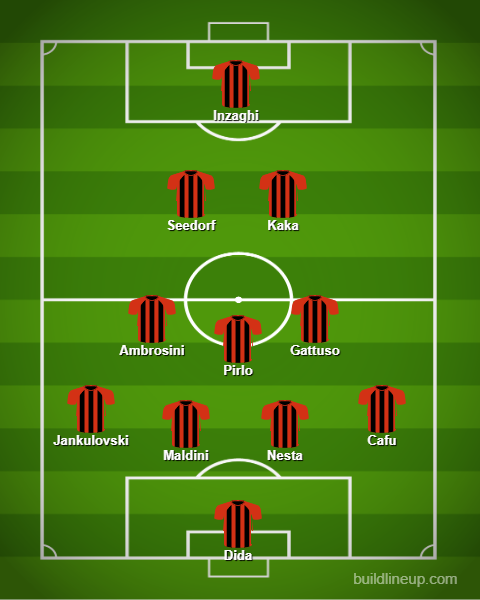 For Ancelotti, this system was the perfect way to squeeze an abundance of midfield talent into the side. Playing a midfield 5 of Pirlo, Gattuso, Ambrosini, Kaka, and Seedorf would have been almost impossible with other more traditional formations, but the Christmas Tree allowed for a perfect blend between the defensive and offensive talents of these players. The 4-3-2-1 formation provided the backbone for 2 Champions League wins, in 2003 and 2007. And it wasn't just Milan that benefited from Ancelotti's formational innovation.

Ancelotti was also known to use this shape regularly during his two highly successful stints at Real Madrid. French forward Karim Benzema is the perfect central striker, while Luka Modric has made the deep-lying playmaker position his own since Pirlo's retirement, winning the 2018 Ballon D'or along the way. Inspired by Ancelotti, three-time Champions League-winning coach Zinedine Zidane has been known to use this formation in recent years, too. 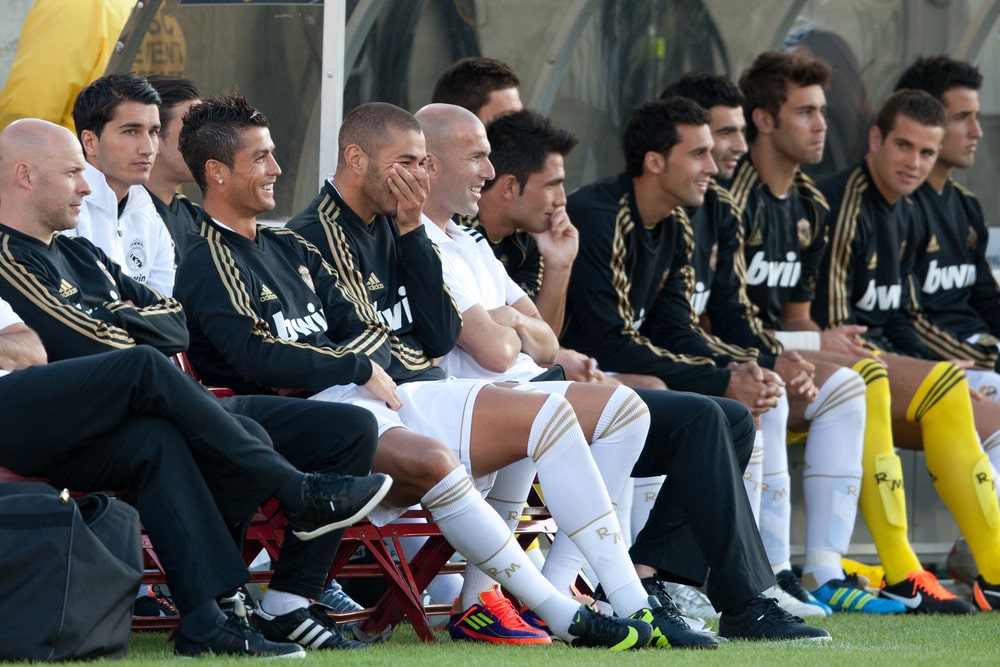 It would be unfair not to also mention some of the earlier pioneers of this formation. While he may not have achieved massive international success with it, England manager Terry Venables often opted for this shape during the 1990s. Going back even further, Crystal Palace coach Bert Head and FC Denhaag boss Co Adriaanse were some of the earliest ever advocates of the Christmas Tree in the 1970s and 1980s. These tacticians laid the foundations for iconic Italian boss Carlo Ancelotti to finetune the 4-3-2-1 and enjoy great success with it.

So what's the best way to stop the Christmas Tree formation from working? In order to truly come up with an answer to that, it's important to recognize when this system is most successful and ensure that you're not playing into the hands of the opposition.

4-3-2-1 is probably most effective as a counter-attacking formation, because it's very defensively solid, but it also creates lots of opportunities for quick forward passing moves. By lowering the amount of pressing you do high up the pitch and ensuring you've always got numbers in defensive areas, you can reduce the danger of a side using the Christmas Tree to mount counter-attack after counter-attack. A good formation to employ in this kind of situation would be 4-2-3-1, which uses a double pivot in midfield to provide cover in front of the back four.

3-5-2 can also be highly effective against the 4-3-2-1 system because it matches the structure's 5 midfielders while providing lots of width and thereby pinning back the opposition full-backs and creating 1v1 situations in wide areas high up the pitch. This shape is also excellent when it comes to dominating possession, and if you're able to take control of the ball, you'll negate the overall influence of the 4-3-2-1's deep-lying playmaker. To find out more about this system, check out our dedicated article on the strengths and weaknesses of the 3-5-2 formation.

While 4-3-2-1 isn't the most common system in the world, it does have serious benefits, as we've seen throughout this article. Elite coaches such as Carlo Ancelotti have employed it at the highest level, winning European cups and domestic titles galore thanks to the defensive solidity and attacking flexibility it provides. Soccer tactics come and go in waves, and while this system is a little unorthodox, that doesn't mean its popularity won't grow again in the future. For more guidance about the tactical trends of the game, why not check out our article on the rising phenomenon of zonal marking?

Why is 4-3-2-1 called the Christmas Tree formation?

The 4-3-2-1 formation is widely referred to as the Christmas Tree, simply because of the way it looks when written on a team sheet. With four defenders, three holding midfielders, two attacking midfielders, and one striker, it's structured like a fluid triangular shape, hence its name.

4-2-3-1 is a variation of the 4-5-1 formation that separates the midfield into a double pivot of two defensive midfielders and a more fluid attacking midfield three. Up front is a lone striker, while defensive support is provided by a back four. It's a formation that's designed for keeping possession and dominating midfield.

The term 'double pivot' is used to describe a central defensive midfield partnership tasked with protecting a team's defense, cutting out opposition attacks, and progressing the ball forwards to more attacking midfield players. Our article on the double pivot explores this position in more depth.