The 4-5-1 Formation: Its Uses, Benefits, and Weaknesses 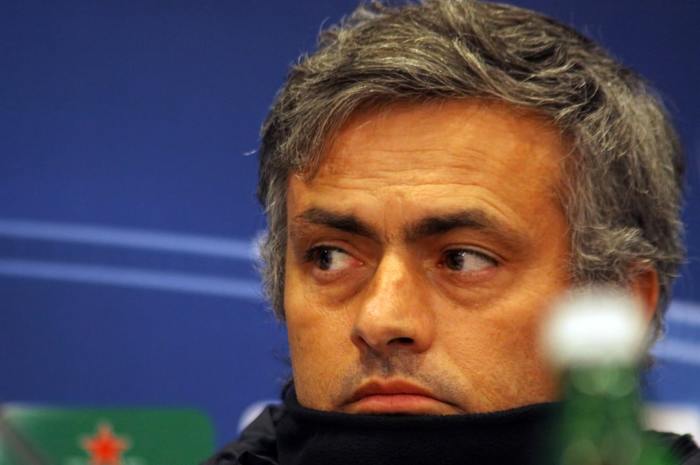 Tactical shifts and trends are inevitable within the world of soccer. As time passes, new strategies, formations, and approaches to the game will develop, and old methods will be left behind.

These days, it's rare to see teams lining up with a strike partnership, for example. Back in the day, formations like 4-4-2 relied heavily on having two forwards who were capable of winning headers, holding up the ball, and linking up with each other. These days, most coaches tend to opt for a lone central striker, preferring the extra manpower this gives them in midfield areas, where possession can be dominated and key tactical battles won.

A number of formations exist to take advantage of a busy midfield and use a lone striker to provide decisive finishes. In this article, we'll be focusing on one of the most prominent ones across world football: the 4-5-1 formation.

4-5-1 is one of the most fundamental shapes that exists in soccer. There are tons of different variations of it, and its flexibility and easy adaptation is partly what has made it so popular, with plenty of options available for coaches who want to focus on defense, as well as attack.

The 4-5-1 system consists of four defenders, five midfielders, and one striker. Generally speaking, the back four will be reasonably flat, with a right-back and left-back providing defensive support for the two center-backs between them. Up front, a lone striker will be relied upon heavily not just for goals, but also for hold-up play, pressing, physical combativeness, and channel running.

In midfield, things can vary a lot. Elsewhere on the Jobs In Football Blog, we've covered popular variations of 4-5-1, such as the 4-2-3-1 system that came to prominence throughout Europe in the late 2000s and early 2010s. For that reason, today we'll be focusing on the more traditional application of this formation.

A typical 4-5-1 is heavily focused on width. Usually, it will include a relatively flat trio of central midfielders, who are tasked with providing defensive support to the back four, breaking up opposition attacks, and keeping hold of possession. Generally, 1 or 2 of these players will be more defensive midfielders, with someone else assigned more creative duties. These central midfielders will look to move the ball out wide, where wingers will be able to launch attacks and get crosses into the opposition penalty area. 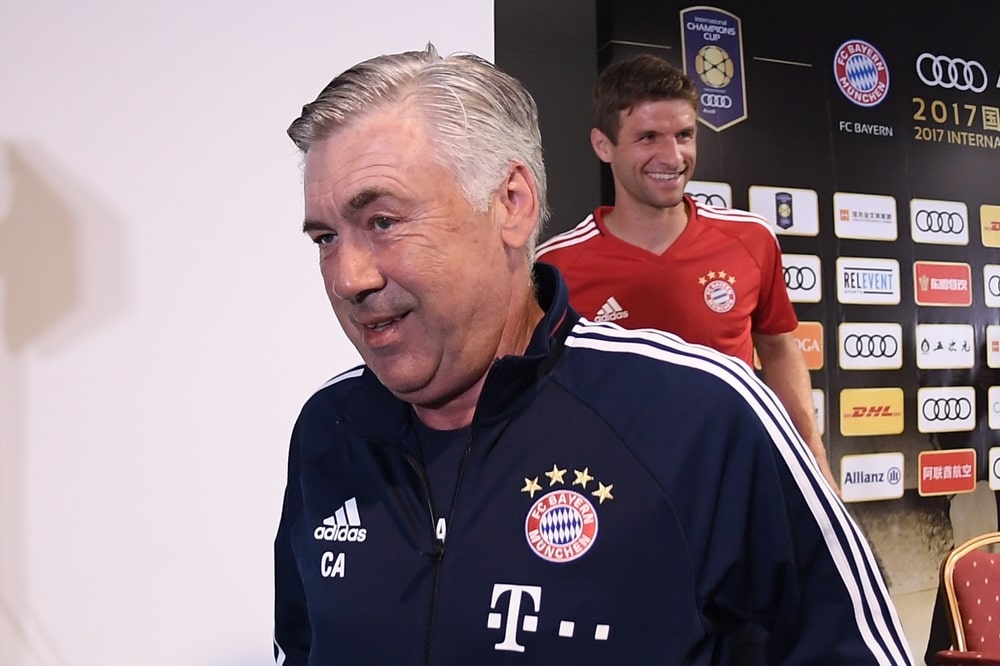 4-5-1 systems create attacking moves by spreading bodies across the midfield and encouraging wide players to support their team's lone striker as much as possible. Only by pushing forward and taking advantage of space on the flanks can the wingers in a 4-5-1 properly support their central forward. This isn't always easy — soon we'll be exploring the pitfalls of this system — but first, let's go through the strengths of the 4-5-1 formation.

The strengths of the 4-5-1 formation

We've touched on width already, but it's worth drilling down into exactly what advantages are created by focusing on wide play. Within the 4-5-1 formation, the midfield is able to span the entire width of the pitch, allowing for play to easily be spread across the pitch and switched with speed in order to catch the opponents off guard.

This means that rather than primarily promoting possession football (which is what formations like 4-2-3-1 often end up doing), 4-5-1 contains multiple routes of attack. Teams can cross the ball from wide positions, and they can also go direct, bypassing the opposition midfield and getting the ball forward quickly to their lone striker.

That being said, if a coach would like to operate with a more narrow midfield, they can shift their wingers into slightly more central positions, converting them into inside forwards that are capable of creating overloads in central midfield areas.

The weaknesses of the 4-5-1 formation

Now to the cons of this popular formation, of which there are a couple. Let's start with the range of attacking responsibilities placed on the '1' in a 4-5-1 system: the lone striker.

There's a lot of pressure on the striker in this formation. They won't just be relied upon for their scoring abilities, they'll also be required to press the opposition backline, often alone. When they do win it, it's possible that they'll be lacking immediate support, meaning that it's important for this striker to be good at holding up the ball and stalling attacks until team mates arrive to help them out.

Isolation is a problem, and the wide midfielders or wingers in a 4-5-1 system are usually depended on to provide support high up the pitch. However, if they get forward too much and negate their defensive duties, gaps can be left in behind. This is another potential weakness of the 4-5-1 shape.

It's also crucial that the midfielders in a 4-5-1 formation are capable in a range of areas; they must have strong passing skills, good vision, stamina, and solid defensive knowhow. Ticking all these boxes is important if you're going to get this system to work.

Which clubs and managers have used the 4-5-1 formation successfully?

A number of clubs and coaches have employed this formation to good effect, particularly in the earlier Premier League years in which wing play was emphasized heavily. Let's look through some of the best examples.

Jose Mourinho's all-conquering Chelsea team of the mid-2000s utilized the 4-5-1 system to great effect. During the 2004/05 season, Mourinho's Chelsea won the Premier League in a ruthlessly effective fashion, conceding just 15 goals over the course of the campaign (a record for goals shipped). 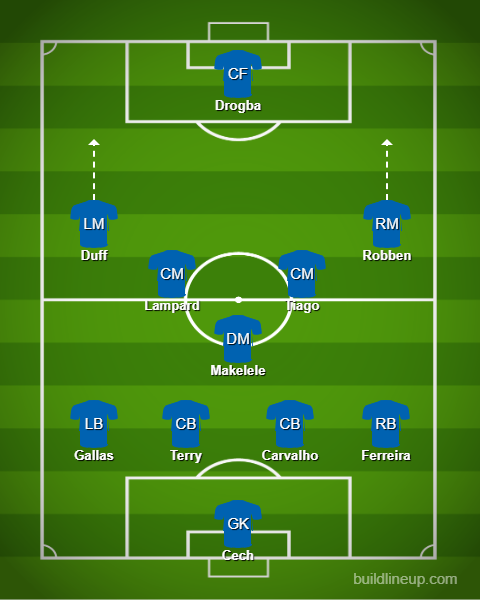 In this system, Claude Makelele sat at the base of the midfield, a perfect single pivot whose protection allowed box-to-box midfielders like Frank Lampard to venture forwards, support attacks, and get the ball wide into crossing positions. Here, talented wingers like Joe Cole, Arjen Robben, and Damien Duff were able to counter-attack with speed and power.

Ancelotti is just one of many coaches to utilize wing play effectively while manager of German giants Bayern Munich. Throughout Arjen Robben and Franck Ribery's long careers at the Munich club, the 4-5-1 shape was used regularly. While often this shape is written as a 4-3-3, it focuses heavily on wingers crossing balls with accuracy and sharpness; in the 2016-17 title-winning campaign, 12 goals were scored from crosses, a league high.

Generally, 4-5-1 is seen as a pretty defensive formation. The sole striker, the often flat midfield 3 and flat back 4; all these elements can be used to emphasize defensive solidity rather than attacking intent. Therefore, coming up against this formation, it's not outlandish to assume that your opponents don't have a huge amount of strength up top. A potential response to this? All-out attack.

While it's important to always retain a degree of defensive solidity, one of the best ways to beat a 4-5-1 system is to pile lots of players into attacking areas, outnumbering the opposition back 4 and allowing plenty of scoring opportunities as a result. This can also cause opponent midfielders to drop back and help out defenders, leaving their forward completely isolated. This single striker can also be handled by just 2 center-backs, leaving your full-backs with plenty of freedom to get forward and attack, forcing the opposition wingers back into defense.

In terms of shape, the 4-3-3 formation is arguably best for this. A single defensive pivot flanked by 2 dynamic No. 8s will be able to handle the midfield battle, while high-intensity full-backs can push forwards, provide width and negate the strength of the 4-5-1 formation in wide areas. These tactics rely on robust, speedy full-backs, but if you've got them, it can work well.

It's worth noting that there are a few different ways to employ the 4-5-1 shape, and your coaching tactics for playing against this system should vary accordingly. For example, using a diamond midfield can be a good way to nullify the strengths of the 4-2-3-1 formation, but it will probably be less effective against a 4-3-3. For more guidance on all these different playing structures, you should check out our article on 9 of the best soccer formations explained.

A 4-1-4-1 formation is a variation of the 4-5-1 shape that places a dedicated central defensive midfielder in front of the back four as a single pivot, with another bank of 4 in midfield in front. This is one of many types of 4-5-1 that can be utilized within football.

4-5-1 is a system that relies on wing play, so if your team can take control of the flanks yourselves, you'll give yourself a good chance of breaking down this formation. Using quick, high-intensity overlapping full-backs and wing-backs is perhaps your best way of doing this. Check out our article on the 3-5-2 formation to find out more about the dynamic role wing-backs can play within soccer.

What is the most defensive formation in soccer?