The 4-4-2 Formation: Its Uses, Benefits, and Weaknesses 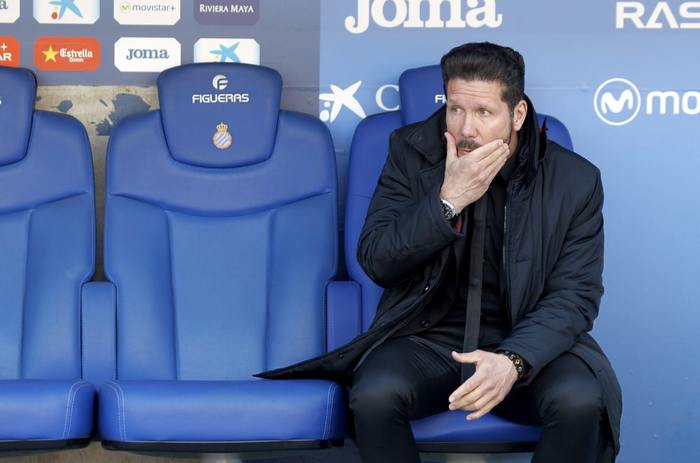 Before the Spain and Barcelona teams of the late noughties started to rip up the script and make possession-based football the Premier League norm, there was one system that totally dominated English football: 4-4-2. It still has its advocates today, although its popularity has certainly reduced over the years.

But why is that? And what made the 4-4-2 system so widely used in the first place? In this article, we'll take you through the key uses, positions, benefits, and weaknesses of this formation. But let's start with the basics; what does a 4-4-2 shape look like?

The basics of a 4-4-2 soccer formation are pretty simple. This formation uses a back four made up of two center-backs, a right-back, and a left-back. The right-back and left-back (also called full-backs) focus primarily on defensive duties, because offensive width is provided by two wide midfielders ahead of them. Sandwiched between those two winger positions is a central midfield partnership, which completes the midfield four.

Of those two central midfielders, one will usually sit back and provide more defensive cover, while the other will roam forward and create attacking opportunities. Finally, the 4-4-2 shape uses a strike partnership, relying on these two forwards to press opposition defenders and consistently provide an out ball for the midfield and defense. Having these bodies occupying advanced positions throughout a match can cause real problems, which leads us smoothly onto our next area of focus, the key strengths of a 4-4-2.

What are the strengths of a 4-4-2 formation?

Perfected during the early Premier League era of the 1990s, 4-4-2 was the go-to system for most English teams for the best part of two decades. Best utilized for the purposes of counter-attacking football, this formation can be demanding (more on this shortly), but when played right, it can also be super effective.

With its solid defensive line, its attacking width, and its ability to ensure that players can quickly flock into forward areas, the 4-4-2 is the perfect system for counter-attacking football (this will become abundantly clear later on, when we explore which teams have favored this system).

If a coach wants to set up defensively, absorbing pressure and allowing the opponents to have possession, this shape is great for it. The four defenders and four midfielders can line up rigidly in front of the 18-yard line, forming 'two banks of four' and allowing the two forwards to remain high up the pitch, ready to pounce in the event of a counter-attack.

It's worth focusing a little more on the benefits of having two strikers, especially because this is something you don't see too often in the modern game. Defending against a strike partnership can be really tough, because you have nowhere near the same amount of time and space as you would against one central striker. Opposition central defenders are under constant threat of being left in a 1v1 situation, which will tend to favor the attacker. Passing the ball out from the back will also be much harder with two attackers closing you down at all times.

What are the weaknesses of a 4-4-2 formation?

This might all sound rosy so far, but unfortunately, there are also some clear disadvantages to playing 4-4-2. As we mentioned before, it's a highly demanding formation that requires discipline and hard work all over the pitch. Firstly, the wide midfielders need to be able to quickly mount counter-attacks and carry the ball forward with pace, but they also need to constantly track back and give their full-backs protection.

The role of the more defensive central midfielder also requires lots of discipline and skill, as they will often be outnumbered in key central areas. Their box-to-box midfield companion needs to have huge levels of energy and stamina, while forwards need to be able to press with intensity, hold the ball up well, and bring midfielders into play. Essentially, there are no passengers with the 4-4-2 system.

Playing 4-4-2 can also make it difficult for teams to maintain control over a game, especially when it comes to dominating possession. Often, they will have to surrender the ball to the opposition for large parts of the game, acting with discipline and waiting for the right moment to pounce. Having this much defensive-mindedness can sometimes frustrate and stifle the creativity of more creative midfielders who would rather be dominating the ball in higher areas.

Arguably the biggest weakness of this formation is that it leaves teams vulnerable to becoming overrun in midfield. When 2 central midfielders come up against a 3-man midfield, it can be incredibly hard to win that central battle and stop the opposition from easily passing their way through. If, as a coach, you want to dominate possession in midfield, this system probably isn't for you.

Which clubs and managers prefer the 4-4-2 system?

If you went back in time 20 years, you'd struggle to find a Premier League manager who wasn't operating a 4-4-2 shape, but nowadays, it's less common. For the reasons we outlined in the previous section of this article, most teams prefer to use 3 central midfielders and negate the risk of losing that crucial battle in the middle of the pitch.

That being said, there are still some superb recent examples of successful 4-4-2 systems, and if you go back further, some of the best ever teams have set up in this way.

Right now, Diego Simeone's Atletico Madrid is probably the most famous and successful team using the 4-4-2 formation. Their compact shape is perfect for soaking up pressure, slowing down games, and hitting teams hard on the break. This strategy has led them to 2 La Liga titles, 2 Europa League trophies, 2 Super Cups, and 2 Champions League finals. 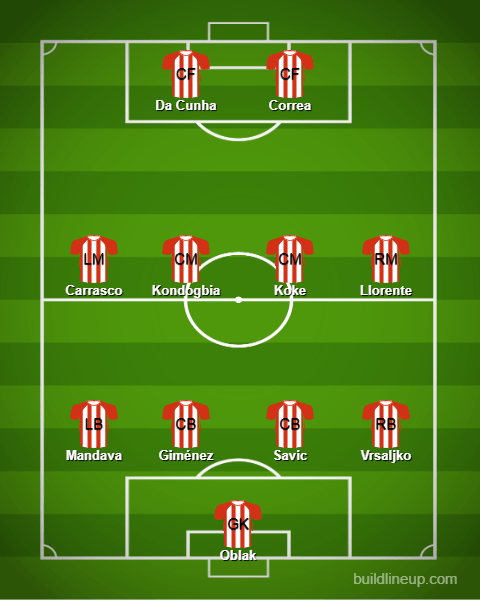 A typical Atletico Madrid setup during the 21/22 season. This was the team that defeated Real Madrid 1-0

During his 27-year reign at Manchester United, Sir Alex Ferguson became perhaps the greatest British manager of all time by finetuning the 4-4-2 formation to perfection. With solid, reliable defenders like Jaap Stam, Gary Neville, Rio Ferdinand, and Nemanja Vidic, and hard-working, talented wide players like Ryan Giggs, David Beckham, and Cristiano Ronaldo, Ferguson's teams struck a perfect balance between defense and attack.  Winning 13 Premier League titles, 3 Champions Leagues, 5 FA Cups, and countless individual honors, 'Fergie' was able to get the absolute best out of this formation.

Another good example of an effective use of 4-4-2 came during Leicester City's incredible 2015-16 title-winning season. Against all the odds and with a shoestring budget, the recently-promoted side were able to demolish teams on the counter-attack thanks to their excellent organisation and the star quality of players like N'golo Kante, Riyad Mahrez, and Jamie Vardy.

Now that we've explored the 4-4-2 shape in some serious depth, plotting its strengths, weaknesses, and key uses, you might be wondering about one key question: how do you stop it? This is a question we've already answered to some extent, although it's worth providing some more detail on this subject.

If you had to attribute the decline of the 4-4-2 to one key factor, it would be this: teams began to figure out that a 3-man midfield could totally overrun a 2-man one. It's a fairly simple principle, but one that is evidenced by Spain's domination of world football between 2008 and 2012. By the time this impressive reign had ended, many teams had decided to move away from the 4-4-2 system. It became clear that by playing 3 central midfielders and progressing the ball using short, quick passing, fluid movement and rotation, the weaknesses of the 4-4-2 could be exploited. 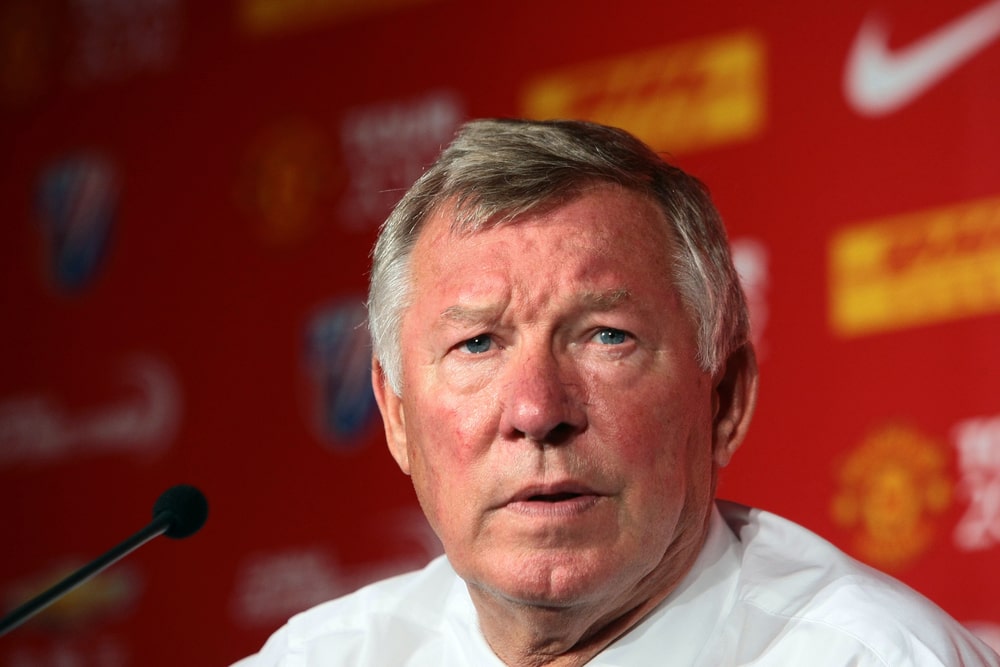 Sir Alex Ferguson frequently employed the 4-4-2, the most well known example being their famous Champions League Final victory in 1999

Perhaps the best way to line up against 4-4-2 is by playing a 4-5-1 shape. This allows you to overrun the opposition midfield, while maintaining plenty of width both for attacking purposes and in order to stop wide midfielders from causing problems via counter-attacks. A 4-5-1 system (which you can find out more about in our guide to the 9 best soccer formations) can also allow teams to create a front 3 in attack, getting beyond the opposition full-backs and creating 1v1s in dangerous areas.

Taking a more direct approach to beating the 4-4-2 structure can also work. Again, you'd shape up as a 4-5-1, but instead of focusing on dominating possession, you'd look to play the ball forward quickly to your central striker and supporting wingers, and you'd use your midfield 3 to pick up loose second balls after the first initial aerial battle. Playing quick forward passes into wide channels can also allow your wingers to exploit the gaps that a more narrow, rigid 4-4-2 formation can leave.

There are a few different ways that a 4-4-2 shape can be exploited, which explains why the popularity of this formation has dropped significantly over the past decade or so. However, as we've explored, there are still some key strengths that come with a 4-4-2 structure. For teams looking to soak up pressure and hit their opposition on the counter-attack, it's a particularly effective tactic to use.

Unfortunately, the ever-growing trend towards possession-based football has made formations like 4-3-3 much more favorable, particularly for elite coaches like Liverpool's Jurgen Klopp and Manchester City's Pep Guardiola. Check out our deep dive into the 4-3-3 formation explained for everything you need to know about this popular system.

Want to learn about more formations? Check out our overview of the 4-2-2-2 formation, favored by managers such as Ralf Rangnick.