How Long Is A Soccer Game? 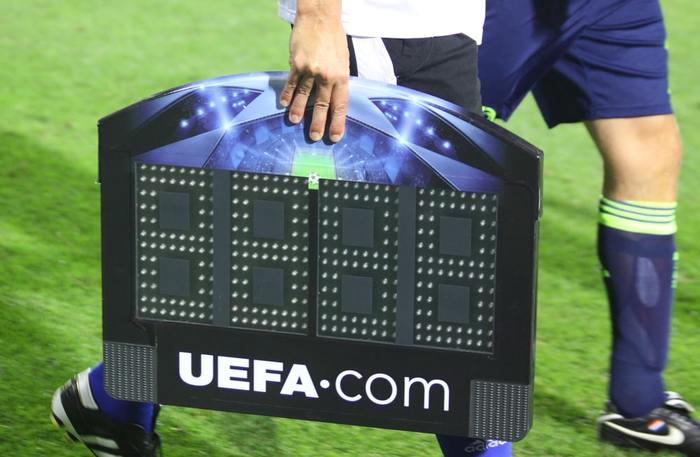 There are lots of differences between elite soccer and US sports leagues like the NFL, NBA, and NHL. If you're watching a game on TV or in the flesh, one of the key differences you'll see is that the clock runs up instead of down. Stoppages in play won't lead to the clock being stopped, either; instead, it will keep running until the end of play, at which point additional stoppage time will be added. But why is this? And how long is a standard soccer match? In this article, we'll answer those questions, giving you a detailed explanation of how matches are structured so that you're confident about the differences between soccer and most US sports.

How Long Is A Soccer Game Usually?

A standard-length soccer match is 90 minutes long. This period of gameplay is broken down into 2 x 45-minute halves with a 15-minute break in the middle. This is the case at every level of the game, from professional soccer games in the Premier League all the way down to the most amateur weekend games, youth leagues,  and even middle school soccer games. 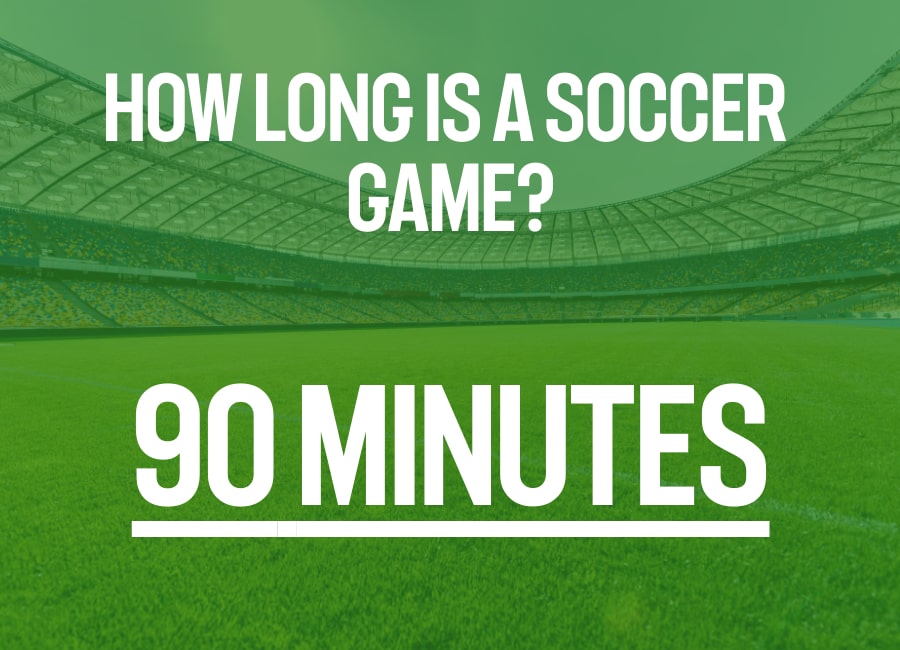 It's also worth noting that both Men's and Women's football matches stick to the same rules regarding timing. This has been the case ever since a prearranged time of 90 minutes was agreed upon for a match between London and Sheffield way back in 1866.

Given that a soccer match will include a half-time break and stoppages at the end of each half on top of the regular 90 minutes, you can expect the average game to take up around 2 hours, or just under. A Premier League kicking off at 3pm, for example, will usually finish just before 5pm.

This is a much shorter duration than you see in most US sports; for example, the average NFL game takes 3 hours, 12 minutes, while in 2021, the average NBL play-off match lasted a whopping 3 hours, 42 minutes.

Soccer games can occasionally stretch closer to this kind of timeframe. If you've watched cup competitions like the Champions League or the World Cup on TV and seen matches extend beyond this regular timeframe, you might be wondering what that's all about.

Shortly, we'll explore why this is and explain everything you need to know about the role of extra time and penalties. Before we get to that, though, let's quickly look at the issue of injury time in soccer.

What Is Stoppage Time In Soccer?

Stoppage time is any time added to the regulation 90 minutes due to unscheduled stops in play. During a soccer game, the clock will run up continuously, even during stoppages for free kicks, fouls, injuries, bookings, and substitutions. At the end of each half, the referee and his game officials will decide upon an appropriate period of stoppage time to add on to the regular 45 minutes, in order to make up for this lost time.

If the game has been free-flowing and clean with very few injuries or substitutions, this is likely to only be 1 or 2 minutes. However, if there are lots of short stoppages in play or an extended break for a more serious injury like a leg break, the match officials will add a longer period of stoppage time.

This can vary immensely, with some extreme cases seeing up to 10 or 12 minutes of additional time played at the end. Generally speaking, the average soccer match will have 2-5 minutes of stoppage time at the end of each 45-minute period of regulation time.

The key reasons for stoppages in play are as followed:

There are other more unusual circumstances that can lead to stoppages in play, for instance, player violence or a fan running onto the field of play, but these are rare. The points listed above are the main reasons that stoppage time will be added at the end of a 45-minute half. 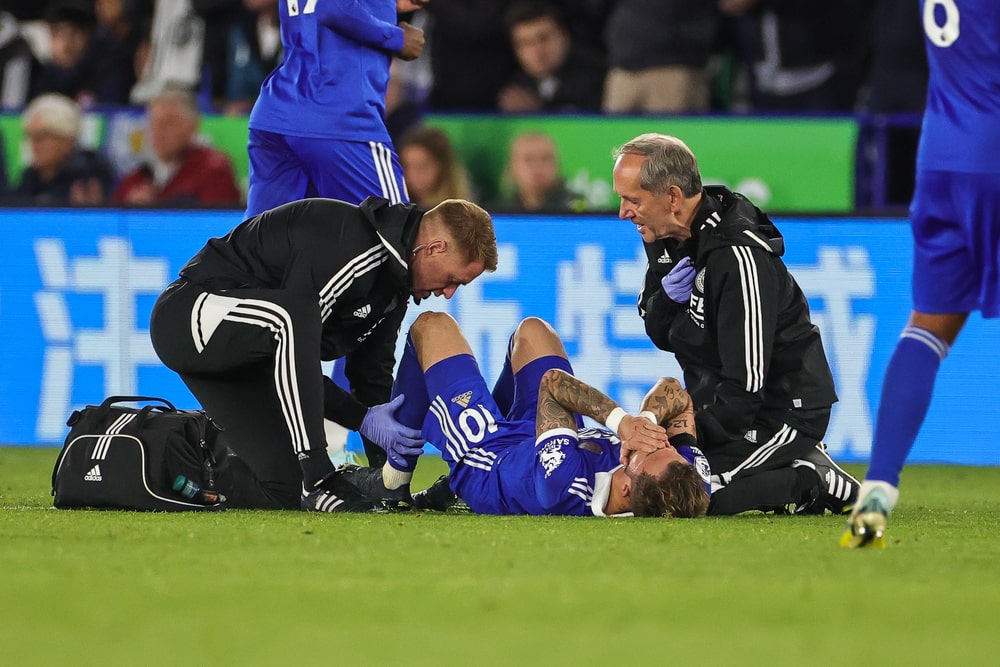 What Is Extra Time In Soccer?

Some of the most dramatic moments in soccer come towards the end of cup ties, when stakes are high and the prospect of extra time and penalties puts pressure on both teams. But what exactly is extra time? How does it work, and how long is extra time in soccer?

In league matches (for instance, the Premier League or La Liga), matches will never extend beyond 90 minutes plus additional time for stoppages. This is because if the match ends in a draw, both teams will gain a point.

However, in cup competitions such as the Champions League, Europa League, and World Cup, when a winner needs to be decided, a draw simply won't do. Therefore, if the score is level after 90 minutes, the match will move into a period of extra time to try and decide a winner. This will be a period of 30 additional minutes, divided into 2 15-minute halves.

If this extra time period finishes and the two competing sides are still drawing, a penalty shootout will take place to determine who will win the fixture and advance to the next round, or win the trophy. The penalty shootout is one of the most nerve-wracking experiences in soccer. So how exactly does it work?

To summarise, extra time is the additional 30 minutes that must be played if 2 teams have the same score at the end of the regulation 90 mins (or aggregate if played across multiple games), and the game is played in a knockout format where one team must win to progress.

How Do Penalty Shootouts Work In Soccer?

Penalty shootouts are fairly simple. Each team will get 5 opportunities to shoot at the opposition goalkeeper from the penalty spot, which is situated 12 yards away from the goal - the winner is the team that scores the most.

Over the years, there have been some super dramatic penalty shootouts televised all over the world. Manchester United's victory over Chelsea in the 2008 Champions League final is a great example, as is Italy's triumph over France in the 2006 World Cup final.

We've covered the match conditions that lead up to a penalty shootout — if a winner can't be decided after 90 minutes plus extra time, there's no alternative other than the tense moments of a shootout. So how do they work out?

The two sides involved will take it in turns to take a shot, while a scoreboard keeps count of how many penalties they've each converted. Teams will choose their top 5 finishers to take the penalties, meaning that you'll tend to see attackers queueing up at this period in the game.

However, it's also not uncommon to see confident defenders like David Luiz or Virgil Van Djik converting penalties from the spot.

Although a standard penalty shootout will involve 5 penalties for each team, sometimes this isn't needed. If one side goes 3-0 up after 3 penalties each, for instance, it will become mathematically impossible for the other team to win, so the shootout will be over.

On the other hand, sometimes the quality of penalties taken will be so good that the shootout can go on for a significantly long period of time, with every player on the pitch ending up taking a penalty.

A good example of this would be the 2012 African Cup of Nations final, which saw Zambia beat Ivory Coast 8-7 in a lengthy shootout. In situations like this, each player (including the goalkeeper) must take a penalty before their chosen 5 penalty takers can have another shot.

This can lead to some cup matches ending bizarrely; for instance, the 2022 Carabao Cup final saw the winning kick converted by Liverpool goalkeeper Caoimhin Kelleher after Chelsea goalkeeper Kepa Arrizabalaga blasted his kick over the crossbar.

It's worth noting that these are extreme situations. It's pretty rare that a soccer match will extend beyond the usual 90 minutes plus stoppage time, and even then, it could be won in extra time before a penalty shootout occurs.

Penalty shootouts, or in some cases a penalty within the 90 minute game time, are recognised as one of the most high pressure situations for any footballer within their career. Some handle this better than others, with the most confident taking what's referred to a "panenka". Check out our article on the best panenka penalties for more on this.

Do All Soccer Matches Have The Same Length?

Put simply, yes. In smaller-sided games such as 7-a-side or 5-a-side, or when players are young and don't have the stamina for 90 minutes, teams will play shorter fixtures depending on the competition rules.

However, in any regular 11-a-side soccer match for adults, whether it's an elite professional clash, a non-league fixture, an amateur Sunday league match, or a college or university soccer match, players will compete for 2 45-minute halves, plus stoppage time.

This level of consistency can make it a little simpler following soccer, which doesn't have the level of time variation that US sports like baseball and American football do.

Hopefully, we've answered all the questions you could possibly have regarding the length of a soccer match. To recap, soccer games take 90 minutes, with a 15-minute break in the middle of the match between 2 45-minute halves.

Stoppage time will be added by the match officials at the end of each half, depending on how many stoppages for injury, time-wasting, substitutions, and fouls there have been. Next time you tune into an elite professional match, keep an eye on these areas of play and try to guess how much stoppage time the officials will choose to add.

If you want to dive deeper than the basic rules of the game and find out more about tactics and strategies in soccer, check out our article on the rise of London club Brentford FC, a team that has revolutionized the use of long throw-ins in British soccer. For some more guidance on the basics of the world's most popular sport, check out another of our explainer pieces, "Offsides In Soccer, the role of game officials or learn about the dimensions of a soccer field.