Game Officials: Who Are The Key People Needed In A Soccer Game? 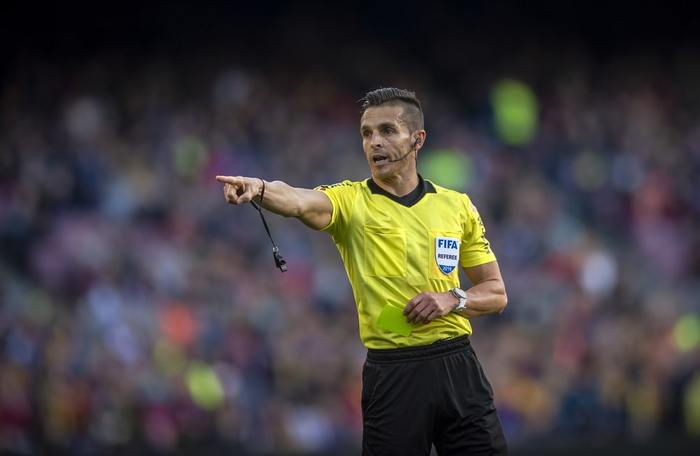 Is there anyone in football who gets as much criticism as game officials? It can be a pretty rough ride for the referee and other professionals involved in ensuring the laws of the game are followed throughout a match. After all, there's a reason the phrase "Who'd want to be a referee?" exists.

However, match officiating is an area of the game which is sometimes taken for granted. The best referees are hardly noticeable during a match, because they allow play to flow freely while not causing any disruption from poor decision making. This means that many people are slightly unclear about exactly what the responsibilities are of a referee and their fellow game officials.

In this article, we'll be explaining the key people involved in officiating a soccer game, detailing the basics of their roles and highlighting why it's so important that match officials get things right. Let's start with a quick definition of what a match official is.

According to the Football Association (FA), "a referee is appointed to a football game in order to apply the Laws of the Game so that it is played fairly and safely. A referee must be confident, assertive and fair in order to successfully control the game." Any UK citizen over the age of 14 can become a referee with the FA, and similar laws apply in most other nations across the world. Once qualified, a referee must affiliate with his or her County Football Association each season.

Referees are supported by match officials who operate under their direction. The other on-field officials are expected to assist the referee with decisions when they have a clearer view and submit a report to the appropriate authorities when any serious misconduct or incident occurs that the referee misses. Similarly, in the event of undue interference or improper conduct, the referee will relieve their assistant officials of their duties and make a report to the appropriate authorities.

The responsibilities held by this group of match officials includes inspecting the field of play, maintaining records of time, goals, and match events, calling fouls, awarding free-kicks, corners, throw-ins, and other set-pieces, and giving yellow or red cards to players deemed to have fouled opposition players or committed some other form of misconduct. Shortly, we'll explain the exact jobs assigned to each match official in a little more detail, but first, let's flesh out exactly what a team of match officials looks like.

How Many Officials Are Needed For A Game?

Soccer is a sport that's constantly evolving. Although there are many aspects of the game that have barely changed since the official rules were first drawn up in mid-19th century England, there are other ways in which soccer has changed dramatically in recent years. Perhaps the most significant of all is the advent of Video Assistant Referees, or VAR.

The introduction of video technology into the game has increased the number of officials that are needed to manage a soccer match. And while at lower levels of the sport, such as in amateur grassroots leagues or at non-league level, these extra officials aren't involved, most elite competitions around the world now use video assistants.

In professional yet not elite standard leagues like the EFL Championship, VAR has not yet been introduced. Therefore, these matches will generally continue using four match officials. Further down the pyramid, for example in amateur football matches, it's rare to see a fourth official being used, so generally the game officials line-up will consist of a referee and two assistant referees.

Each of the roles we've mentioned in this section are important when it comes to maintaining a safe, orderly, legal, free-flowing soccer match. Therefore, it's worth spending a little time explaining what each game official does during a match.

Who Are The Key Game Officials?

We've already touched on some of the key players involved in officiating a soccer match, but it's worth digging into each individual role in a little more detail. Let's get into it, starting with the most important person of all — the referee.

The referee is the most important match official there is, and they're equally crucial whether you're playing at the highest level or just with a local park team. Referees stay on the field throughout the game, moving with the run of play and keeping up with all the action. It's crucial that their fitness and stamina is top quality, because they will need to be nearby any major or minor incident, with a good line of vision at all times.

Their primary role is controlling the match and ensuring that the laws of the game are enforced and followed at all times. When rules are broken and fouls or misconduct take place, the referee is responsible for implementing disciplinary matters. Key examples of this type of activity include the awarding of penalties and free-kicks, the flagging of foul play, and the awarding of yellow or red cards to players who have stepped out of line. Making these calls requires referees to be firm and decisive, with a knack for making their voice heard and providing clear instructions and judgments at all times.

Timekeeping is also in the remit of the referee. They're responsible for recording the 90 minutes of a soccer match (plus stoppage and extra time), supervising the pausing and resuming of games and making additions to the clock accordingly. Throughout all this, it's also important that this primary match official maintains strong communication with all players on the pitch, particularly team captains, who often act as intermediaries between the referee and the players on a team.

Assistant Referees, also referred to as Linesmen or Lineswomen, are also crucial to the smooth running of a professional soccer match. Assistant Referees remain on the touchlines at the side of the pitch at all times, running up and down the line in accordance with the play of the game and making key decisions based on their unique vantage points.

There must always be two Assistant Referees assigned to a match, one on each side of the pitch, in opposite halves. This style of organization means that both teams and both defensive lines can be observed accurately by the respective linesperson responsible for keeping an eye on them. And their most important job? Observing when attackers stray into offside positions and flagging when they do so. Without the work of the two Assistant Referees, it would be very difficult to enforce the Offside Rule, which is one of the most crucial laws within soccer.

However, flagging offsides isn't the only thing Assistant Referees are responsible for. They're also able to signal fouls when they see them, particularly if the fouls take place in areas of the pitch which the Referee is unable to view clearly. Awarding throw-ins, corner kicks, and goal kicks also comes within their remit. This array of tasks means that Assistant Referees must constantly be alert, noticing how even the slightest of touches affects the ball's movement, so that they can ensure the set-pieces they award are always the correct decision.

The final on-field match official to discuss is the Fourth Official. This individual plays a key role in regulating any match, even though they're rarely in the limelight. The Fourth Official remains close to the touchline at all times, between the two dugouts and ready to intervene if any off-field disagreements take place.

This is because one of the primary roles of this match official is to monitor players and coaches in the technical areas, who will often approach them with various grievances throughout a match. Diplomatic skills and the ability to explain decisions and placate angry managers are therefore crucial to the arsenal of any Fourth Official. However, their duties extend beyond just that.

One of the most important responsibilities afforded to the Fourth Official is the supervision of subtitutions. They ensure that substitutes' equipment is in order, before indicating substitutions by holding up the relevant squad numbers on the electronic board. They must also record the exact times that substitutions are made, as well as keeping a detailed record of other key events that take place throughout the match.

The Fourth Official's remit also includes signalling extra time and stoppage time (using the same electronic boad), as well as supervising the re-entrance of injured players onto the pitch, the replacement of balls, and any entrance of physios or medical staff onto the pitch.

One more crucial thing to note is that a Fourth Official is usually also a qualified referee that's capable of taking the place of any of three match officials (referee, two assistants) if they cannot continue for whatever reason. Due to this fact, you could say that even though many people view it as the least important of the on-field match officials, the Fourth Official role requires the most versatile skills base of all.

Their role essentially amounts to monitoring a video feed in real time to recheck passages of play for fouls, serious incidents, penalties, offside calls, handballs, and more. The job of a VMO can vary depending on the competition they're officiating in, but there are some key areas that are followed pretty much across the board.

According to the FA, a video assistant referee is "a match official, with independent access to match footage, who may assist the referee only in the event of a 'clear and obvious error' or 'serious missed incident' relating to:

When such a decision must be taken, Video Assistant Referees have a responsibility to contact the head Referee via a line of audio communication and inform them of their opinion. They can advise referees to change their decision, or advise them to view a pitchside monitor so that they can confirm that they're confident they made the correct decision. VAR is designed to cut out officiating errors, although it has led to its fair share of controversy (but sadly, we don't have time to get into that).

Want To Be A Game Official?

The duties and responsibilities of each key match officiating role should now be clear to you. Officiating is a crucial aspect of the game that allows players to put on the amazing soccer spectacles we all love to see without worrying too much about the rules.

Does becoming a match official interest you? While it can be extremely demanding and all referees are bound to face criticism, many people find it very rewarding to act as a facilitator of a safe, legal, and exciting match of soccer.

If a career in the beautiful game is a dream of yours, why not begin your journey by reading our 11 tips to get started in the football industry? Or if you want to learn more about the basics of the game, check out our soccer field dimensions summary.