10 Soccer Skills You Should Learn 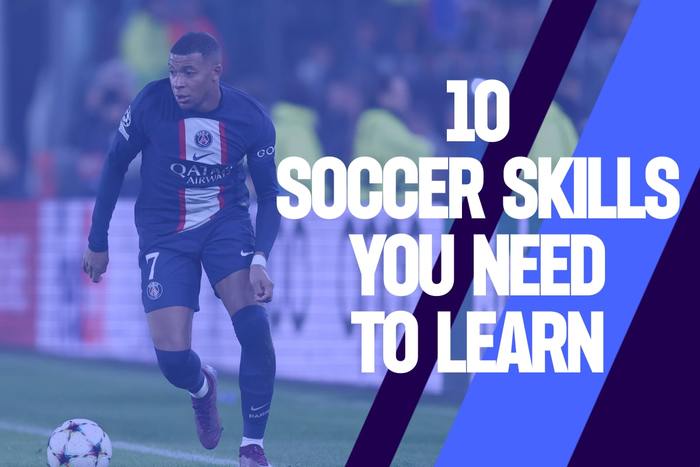 Technical skill is what makes the best players in the world stand out. Sometimes, footballing magicians like Lionel Messi or Neymar seem to be able to pull off tricks that you can barely even wrap your head around, let alone accomplish yourself.

However, often things can look more complicated than they really are. Many soccer skills are difficult, yes, but that doesn't mean amateur players can't learn how to do them too.

Our recent skills series has provided deep dives into a variety of different tricks and techniques, from the simple stepover to more complex moves like the rainbow kick. We've traced the history and origins of different skills, as well as offering step-by-step guides to how you can introduce each technique into your game. Now, it's time to round things up.

In this article, we'll be working our way through 10 key soccer skills you should learn, from more basic moves that will allow you to get past opposition defenders, to the most advanced tricks you could possibly pull out of your locker on a soccer field. Once we're done, you should have a comprehensive understanding of how each skill can be employed to boost your chances of success. Okay, let's get started!

This is one of the most simple soccer skills there is, but when done correctly, it can be extremely effective (and it also looks super silky). Essentially, the stepover, which is also known as the pedalada, the denilson, or the Roeder shuffle, is a dribbling move that looks to open up space in attacking zones.

This is done using a type of feint in which a player shifts their body in one direction, circles their kicking foot around the ball in a quick motion, and then taps it in the other direction and bursts off quickly, leaving the opposition defender stranded behind them. This skill is all about convincing the defender you're going one way before rapidly changing direction and leaving them in your dust.

As such, it's a classic skill for any attacker who loves using dribbling to gain an advantage and get in behind their opponent. Want to learn how to do a stepover? Head over to our article on the stepover skill for a step-by-step guide to performing this skill.

Another essential skill that most soccer players should learn is the Cruyff Turn. Named after the legendary Dutch player and manager Johan Cruyff, who helped pioneer the Netherlands' revolutionary Total Football philosophy, it's a highly effective, but relatively simple skill that can provide huge advantages in various areas of the pitch.

The Cruyff Turn is a dummy move that involves shaping up to pass or shoot, before faking the action and instead dragging the ball behind your standing leg with your instep. As you do so, you'll turn your shoulders and dribble away into the space you've opened up using the dummy. As you can imagine, this can create all sorts of openings in attacking situations.

If you want to find out more about exactly how the Cruyff Turn can help you out, check out our dedicated article on the skill here.

For anyone who's grown up playing street football or facing up against their friends down local parks or in city cages, the nutmeg is an iconic skill. A dribbling move in which a player kicks the ball through an opponent's legs before running round one side of them and picking up the ball, it's a classic trick within the world of soccer.

Both visually impressive and highly effective (not to mention quite embarrassing for the defender who gets beaten), the nutmeg has a special place in the hearts of many top soccer players, with the likes of Luis Suarez and Lionel Messi regularly seen employing it in elite situations. Essentially, it's all about timing; you have to pick the right moment, ensuring there's a gap between the defender's legs, but most importantly making sure they're not expecting you to pull out this trick.

For some more useful tips on using this skill, read our guide to the nutmeg.

Andres Iniesta is one of the best midfielders to ever play the game. And alongside the countless international, domestic, and European trophy wins he racked up, his illustrious career has also left a legacy in the form of an iconic dribbling skill: la croqueta.

Great for maneuvering out of tight spots, it's all about shifting the ball quickly from one foot to the other, before using the second foot to power the ball into space and away from the opposition defender. You need agility, speed, and perfect timing to accomplish this skill, but it's still one of the more simple techniques on this list. That being said, la croqueta, named so because it mimics the movement made when chefs toss batter from one hand to the other to create a croqueta, certainly requires plenty of practice.

To get yourself started in that department, head over to our detailed article on la croqueta.

You've probably seen players use this technique, but you may not have known that there's a name for it. A trivela is a shot or cross taken with the outside of the boot, as opposed to the typical instep technique.

This type of strike can be used to bend or curve the ball into a specific place, moving it away from opposition defenders and ensuring a perfect level of accuracy and pace. Pioneered by former Portuguese international Ricardo Quaresma, a left-winger who made the trivela an iconic skill within this arsenal, it's been used at the highest level by some top players, including Quaresma himself.

Recently, it's been mastered and performed on the biggest stage by a fellow Portuguese technician, Manchester City's Joao Cancelo. The trivela is all about striking the ball with power and accuracy using the outside of the boot, and there are a few areas of technique that need to be practiced hard.

Read our guide to the trivela for some useful tips on how you can perform this skill.

There are a number of skills out there that are named after the players most closely associated with them, and other than the Cruyff Turn, the Maradona Turn is probably the most famous of these.

A dribbling skill in which an attacking player pirouettes over the ball, shielding it whilst performing a 360-degree spin on top of it and dragging the ball in the direction you're moving, the Maradona turn is all about close control. Players need to stay tight to the ball, using a low center of gravity to stay fully in control – this can help get you out of tight spots on the pitch, which was crucial for the player the skill is named after.

Legendary Argentine forward Diego Maradona was used to being surrounded by opposition defenders with very little space to move, and in these kinds of situations, this turn can be super useful. Take a look at our full guide to the maradona turn for some tips on how you can learn this impressive skill yourself.

The Elastico is a skill that's mainly associated with flair players like Ronaldinho and Neymar, who are a great representation of the way Brazilians have molded association football and placed a greater emphasis on individual skill and expression.

Also called a "flip-flap", "akka", or "snakebite", the elastico is an advanced move that involves luring opposition defenders into a trap, feinting one way before manipulating the ball to move in another direction. Footwork and acceleration are the two essential skills when it comes to performing an elastico successfully.

Follow the list of steps in our guide to the elastico skill and you'll soon know how to attempt this trick yourself.

The rabona can be a bit of a showboating skill, but when it's pulled off, it can look incredible. Basically, it involves wrapping your kicking leg around your standing leg to strike the ball, rather than shaping up for a shot or cross with the usual technique. Popularized in the 1970s by Italian winger Giovanni Roccotelli, it's since been perfected and used at the highest level by players like Mario Jardel, Erik Lamela, and Jonathan Calleri.

If you want to join the small but impressive list of players with the boldness and creative flair to pull off the move on the pitch, why not start by checking out our guide to the rabona?

A pretty special skill that has created controversy around the world due to its common association with flashy showboating, the rainbow kick is one of the most advanced skills covered in this article.

Named due to the rainbow-like arc achieved by the ball when the skill is performed, the rainbow kick, also known as the rainbow flick, is a difficult one to master. It involves using one foot to roll the ball up your standing leg, before using that standing leg to flick or lob the ball over the head of the defender in front of you.

These steps need to be completed in a quick, fluid motion, and when done, the attacker will rush on into the space behind the defender and take the ball down. Sounds hard, right? You're not wrong. This skill takes a huge amount of practice, and there aren't too many players around who have utilized it during pro matches – a couple of famous players to have perfected the trick are Jay Jay Okocha and Neymar, but the latter star was once booked for using it due to the controversy that surrounds the skill.

For more on that, plus some practical tips on how to master it yourself, take a look at our article on the subject here.

Easily the most acrobatic skill on this list (and perhaps the most difficult as a result), the bicycle kick is a mid-air strike that looks incredible when pulled off. It involves throwing your body backward up into the air with your back to goal, before quickly propelling your legs and striking the ball behind your head.

The main advantage of this trick (other than just looking great!) is that it can make up for an imperfect cross by repositioning the attacker's body so they're able to direct the ball toward goal even with their back to it. Invented by Chilean and Peruvian laborers in Pacific seaports in the 19th century and named after the bike-like pedaling motion achieved by the legs when a player is in mid-air performing the trick, the bicycle kick has a long, celebrated history within the game.

Clearly, though, this requires serious skill and plenty of practice. If you want to become a master of the bicycle kick, check out our article on the subject for a detailed guide on how to learn this trick.

Skills aren't the only thing we cover in detail here on the Jobs in Football blog. If you're interested in finding out more about how different teams line up on a soccer field, take a look at our guide to the most popular formations in soccer.