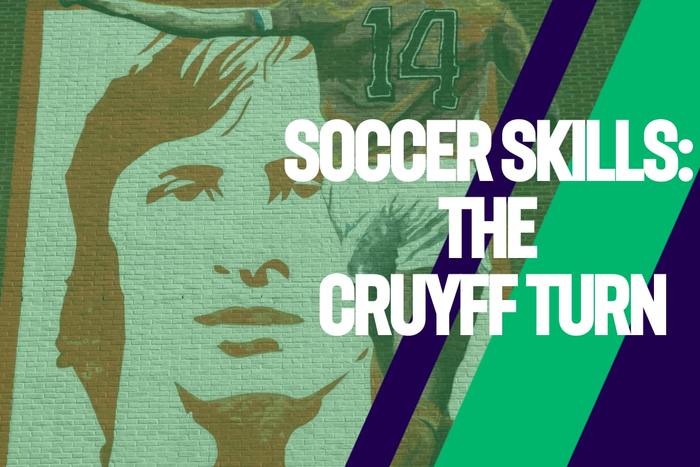 Soccer skills have an exciting role within the beautiful game. They can light up individual moments in matches, and provide teams with the attacking spark needed to grab a decisive goal.

One of the most well-known and simple-to-perform tricks out there is the Cruyff turn, a legendary move that is replicated on parks and pitches on a daily basis. It's so widely accepted, it's crazy to think that there was once a world in which this skill didn't exist.

So what is a Cruyff turn? In this article, we'll be explaining everything you need to know about this famous soccer skill. Let's dive right in.

What is a Cruyff turn?

Unlike complex moves such as the rainbow kick, the technique we're focusing on in this article is relatively simple.

The Cruyff turn is a dummy move that involves appearing as though you're about to pass or shoot, before instead faking the action and dragging the ball behind your standing leg with the inside of your foot. As you do so, you turn your shoulders and dribble off in the opposite direction, opening up space and leaving the defender in your wake.

It sounds simple enough, right? Ultimately, is not a trick to be daunted by — you don't exactly have to search for a magic formula. However, it does take a bit of practice to fully get to grips with. Shortly, we'll be giving you a practical guide on how to pull it off, but first, let's explore what this trick is predominantly used for.

The purpose of the Cruyff turn

The Cruyff turn is designed to help a player turn away from a defender or reverse direction quickly.

It's usually employed in attacking areas of the pitch (after all, it's a slightly risky move to go for when you're defending your own box). The change in direction which sits at the center of this skill can be instrumental in creating a useful passing or shooting opportunity.

In particular, this skill can come in handy when a player is out wide, looking to cut inside to create a goalscoring opportunity. For that reason, you'll often see wingers implementing this technique in a soccer game.

Having a couple of simple tricks in your back pocket can give you major advantages when you're out on the pitch. And when it comes to maintaining control of the ball and creating attacking chances under pressure, there aren't many better skills than the Cruyff turn.

Origins: Who did the Cruyff turn first?

The Cruyff turn was first performed by the iconic Dutch footballer and manager Johan Cruyff, hence its name. It became a classic skill within his arsenal, and was adopted by players all over the world — but when was this famous trick first used?

Cruyff's signature dummy trick was debuted in a match between his national team, the Netherlands, and Sweden, in the group stage of the 1974 World Cup (a tournament which the Netherlands got to the final of, losing to Germany).

With Swedish defender Jan Olsson tracking him tightly, and Cruyff's back to goal, the attacking midfielder/forward suddenly executed an unexpected 180-degree turn and left the defender in his dust. The iconic turn was born. If you want to watch a video of this huge moment, take a look here.

Since then, millions of people have embraced the skill, whether it's in the Premier League or for an amateur side down at a local soccer field. The Cruyff turn is a ball skill that's known all over the world.

Who was Johan Cruyff?

Johan Cruyff was an iconic Dutch football player and manager, who was at the height of his playing powers in the 1970s. A three-time Ballon D'or winner, a World Cup finalist, and a key architect in one of the most influential playing styles of all time, he made a real mark on his sport during his career.

Cruyff was an innovative figure both as a player for Ajax, Barcelona, and the Netherlands, and as a manager for Ajax and Barcelona. And it wasn't just personal accolades and trophies that he was interested in (although he won his fair share of those too).

He was crucial to the development of Total Football, a fluid tactical playing theory in which any outfield player adopts the role of any other player in the team. Our article on Total Football explores this philosophy in more depth.

The style of play Cruyff introduced at Barcelona was also a huge influence on what later came to be known as tiki-taka, a stylistic formula characterised by short passing and movement, working the ball through various channels, and keeping hold of possession for long periods of time. The tiki-taka style was central to the success of teams like Vicente Del Bosque's Spain team (winners of Euro 2008, World Cup 2010, and Euro 2012), and Barcelona under Pep Guardiola.

How do you do a Cruyff turn?

Okay, now that you've learned all about the origins and basic principles of this trick, we're at that all-important section of the article: how do you do a Cruyff turn?

Next time you're closing in on an opposition full-back or lining up to cross the ball into the box, consider how this trick might allow you to switch things up and create an opening. It might be difficult to come up with that magical moment on the spot, but if you put in the work on the training ground, you can soon become a master of this famous turn.

Here are a few simple steps to help you add the Cruyff turn to your arsenal of skills.

Step #1: Get the ball out of your feet in front of you, within striking distance.

Step #2: Shape up as if you're about to kick the ball. It's important to look convincing at this stage, because if the defender doesn't believe that you're actually going to take the strike, the move is unlikely to work properly.

Step #3: Next, rather than striking the ball, drag it back behind your standing leg instead. To do this, use the inside of your foot and simultaneously turn your shoulders. You can tap the ball sideways or back — the point is to change direction quickly and throw off a defender or dribble out of a tight spot. You'll need to kick the ball in a controlled way here, although it's also important to generate enough power to move the ball forward with speed.

Step #4: Having turned your body, move away at speed to leave the defender behind you. Hopefully, you should now be in plenty of space to dribble away freely before executing an attacking move, whether that's a pass, a cross, or a shot.

Feints and dummies like this are a really effective way of beating an opposition defender, but that's not all they're useful for — they also look super stylish! Performing a Cruyff turn doesn't take a huge amount of skill, and any decent player can do it, but it always looks good when done right, and it can create a wide range of different attacking options.

Hopefully, alongside the steps, you'll have all you need to bring this technique into your game.

Our site is packed with loads more useful content on different skills, tactics, and strategies that make the game we love so interesting.

If you're looking for a different type of soccer match that provides plenty of opportunities for showcasing new skills, you might be interested in trying out smaller-sided games. Our guide to 7v7 soccer and the best 7v7 formations provides all the information you need to know about how 7v7 soccer can get you to grips with different formations and allow you to practice certain skills.

Alternatively, if you're a coaching enthusiast looking to expand your understanding of different soccer skills and add to your set of possession-based training drills, check out our detailed guide to the rondo, a soccer skill that plays an important role in training sessions for most of the world's elite teams.

Who did the Cruyff turn?

The clue's in the name — Dutch international Johan Cruyff was the first player to perform this skill on the world stage, hence it was called after him. Want to find out more about Johan Cruyff? Check out our article on Total Football, a tactical philosophy he helped pioneer.

What is the point of the Cruyff turn?

The Cruyff turn is designed to help a player turn away from a defender or reverse direction quickly. This change in direction can be instrumental in creating a useful passing or shooting opportunity. It also looks incredibly stylish, and can humiliate opposition defenders.

While the Cruyff turn or the stepover are more classic skills that don't take tons of practice and flair to pull off, the rainbow kick is up the other end of the spectrum. It involves flicking the ball up and over the defender, and it's one of the most outrageous skill