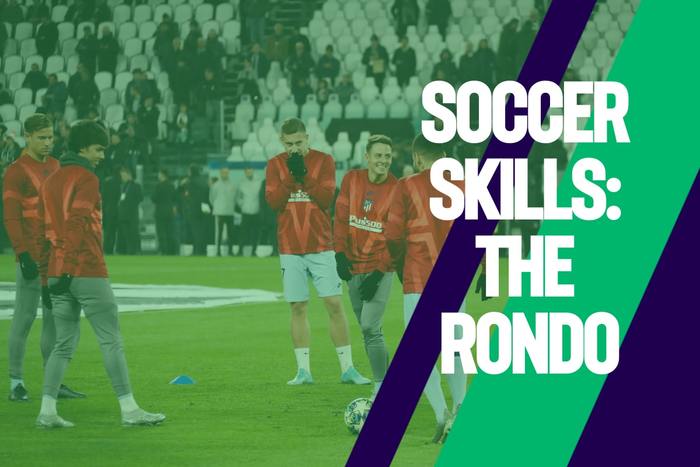 The rondo soccer skill is a classic drill that's been around for years. If you've ever participated in a soccer training session, it's highly likely you've seen a rondo in action, even if at the time you weren't sure of the name of it.

The rondo is one of the most fundamental soccer drills there is, practiced by elite professionals and amateur kids' teams alike. Whether you're at a Premier League ground waiting for your team to come out or walking through a local park on a Saturday morning, you've got a pretty good chance of seeing it in action.

In this article, we'll be giving you a comprehensive guide to the famous soccer rondo. We'll answer the question "What is a rondo in soccer?", before diving into the history and origins of the technique, and exploring the main uses and benefits of rondo soccer drills. Let's begin.

What is a Rondo in Soccer?

A rondo is a type of training drill built around ball possession. Players are split into two uneven sides, and the numerically disadvantaged side is asked to win possession of the ball from the other team, whose job it is to keep possession. The numbers involved in a rondo can vary massively, but you need to have at least three (two passers and a presser), and preferably several more (the more the better, up to a point).

Rondos take place in a circle or grid shape, with the team attempting to control possession by positioning themselves in a ring around the outside, while the other team stations themselves in the middle, where they attempt to win the ball back from them by intercepting passes.

When a member of the defending team wins the ball, their reward is to move to the other side and become part of the team in possession (generally speaking, this is an easier job). Often, they'll swap with the player who gave the ball away, and sometimes the player to their left or right will also have to join them in the middle of the rondo. Ultimately, these technicalities depend on the number of players involved in the game.

Typically, rondo soccer drills use just one ball, although sometimes a second ball will be added into the mix. This can increase the pace of the drill and get players' brains working by introducing a new element to watch out for.

The soccer coach or player in control of the session can also choose to add other elements of play. For example, additional restrictions could be placed on those in the playing area, such as players only being allowed to use their weaker foot, or the possession-based side only being able to take one touch. The defending team could be reduced in numbers to make it harder to win the ball, or increased in numbers to make it harder for other players to keep the ball.

The game can also be expanded to incorporate other skills; practicing an 'escape the rondo' drill could involve the defensive team having to dribble out of the grid once they've won the ball, while a 'rondo shooting' drill could add a shooting on goal element once a certain number of passes have been completed.

Coaching points such as these can be used to train certain skills and adapt the rondo soccer drill depending on the skills and abilities of the players involved. This level of flexibility is super important when it comes to developing effective soccer coaching skills.

It may sound a little wordy, but this is ultimately one of the most simplistic soccer drills there is. If you're still a little confused and want to see a great example of what a rondo looks like in action, watch this video from FC Barcelona on three perfect rondos.

Who invented the Rondo?

The rondo is now firmly embedded within the fabric of world soccer, so much so that it can be difficult to picture a world in which it didn't exist. So who invented the rondo?

It's impossible to directly credit this drill to any one individual, because positional-based exercises like this have been constantly used and adapted by various coaches over the years. However, one name that is often credited with the development of the Rondo is Laureano Ruiz.

Ruiz is a Spanish coach and former Racing Santander and Gimnástica player who had an influential role within European tactics development, particularly during the 1970s. However, his 'invention' of the rondo is thought by many to have taken place way back in 1957, influenced by his observations on patterns of play demonstrated in Hungarian football.

Ruiz was the man who introduced the rondo to Barcelona, as coach of both the first team and the B team during the late 1970s. Dutch maestro Johan Cruyff, a player at the time, was greatly influenced by Ruiz's techniques, and was then able to take things to the next level, progressing the rondo and advancing it from a "fun before you train game" to a key element of tactical and technical preparation.

The impact of this drill is still being felt today, with top coaches like Pep Guardiola known to be huge advocates of the technique. Guardiola's training sessions with Manchester City often see him use a 10x10m square in an 8 v 2 “Piggy in the Middle” game dynamic, usually with one-touch passing. Generally, the goal will be to reach 20 or 30 passes in a row without an interception.

When we watch the elite performances of Pep's City side, it's clear to see how this type of practice improves their play. But before we explore the benefits of the rondo group drill in more depth, there's one quick question we should probably answer.

Where did the name come from?

This is a simple enough question to answer.

In Spanish, 'Rondo' translates to 'round', which in this context refers to the shape the passing team takes up in this drill.

Although square grids can be used for the playing area, this drill tends to use a circular shape.

What are the main uses and benefits of the Soccer Rondo?

A number of skills can be developed by this drill. In fact, Johan Cruyff, one of the biggest advocates of rondo soccer drills, believed that every aspect of the game except shooting could be practiced using this type of session:

"Everything that goes on in a match, except shooting, you can do in a rondo. The competitive aspect, fighting to make space, what to do when in possession and what to do when you haven’t got the ball, how to play ‘one touch’ soccer, how to counteract the tight marking, and how to win the ball back" - Johan Cruyff

For the passing team, skills like ball control, passing accuracy, and decision-making are developed. Passers need to be able to quickly assess the best passing lane and execute an accurate pass, otherwise, they will lose possession of the ball. And when they do lose possession, they'll often be forced to swap out for the defending player — this kind of direct responsibility for a misplaced pass increases focus and demand and emphasizes the importance of maintaining possession for each and every player. 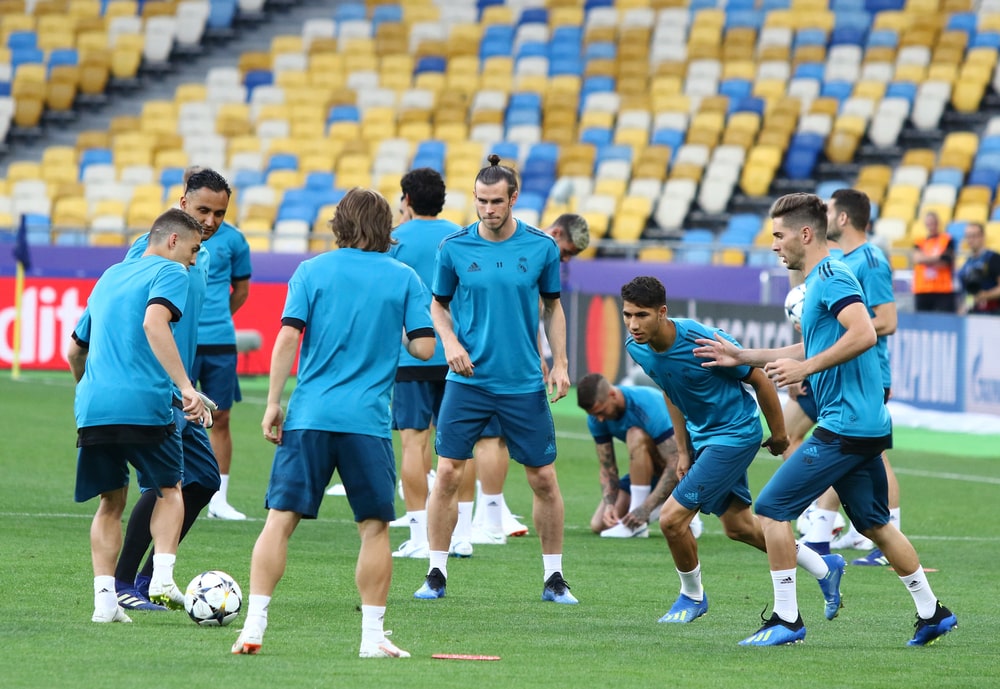 Rondos, much like Soccer Tennis, also help develop first touches. The player receiving the ball must always take a good first touch or risk losing possession of the ball, and in these situations, they need to be able to deal with a wide range of passes; short lay-offs, cross-field pings, pacey fizzers, light aerial clips. Dealing with this range of passes can seriously build ball control skills.

Another benefit of the rondo is that it seriously improves defensive skills. By creating overload situations in which defenders are outnumbered by attackers (eg. 3v1, 4v2, 5v2), rondos elevate the importance of hard work, quick reflexes, and intense pressing. This requires speed, awareness, intelligence, and stamina.

Another defensive quality that rondos improve is intercepting, a pressing skill that focuses on timing your decision to cut the passing lane to perfection. Press too early and too obviously and the passer will switch the ball to a different direction, but if you're too late, you'll struggle to get to the ball before the pass is made.

Teamwork is also boosted by this drill, which requires constant communication, tight-knit organization, and reading the game. There's also a strong element of camaraderie at work during these drills when players celebrate keeping the ball and chastise their teammates light-heartedly for losing it and ending up in the middle.

All in all, the rondo soccer drill is a hugely beneficial technique, which as the late, great Johan Cruyff - architect of the highly influential Total Football philosophy - said, trains pretty much every key soccer skill there is.

Want to find out more about the intricate details of soccer coaching and tactics? Take a look at our guide to soccer positions explained for a dive into each individual position on the soccer field.

Or if you're more interested in reading up on the best philosophies and tactical strategies developed by masterminds of the game, check out our list of 10 great books about tactics and coaching.

Why do they call it a rondo?

'Rondo' translates to 'round', which in this context refers to the shape the passing team takes up in this drill.

What abilities are exercised in rondos?

Which positions benefit most from rondo soccer drills?

Possession and ball work skills are crucial for any footballer, and defensive players can also benefit from this training drill, which asks them to intercept and win the ball in tight situations. However, the players who benefit most from training these skills in rondo drills are usually more technical operators like attacking midfielders and wingers.

What is the role of an attacking midfielder in soccer?

The attacking midfielder plays in an advanced midfield role, linking the midfield and attack and creating scoring chances. Key skills include ball control, passing, dribbling, and movement. Our article on the role of attacking midfielders explores this issue in more depth.