The Benefits of Soccer Tennis (and How to Play It) 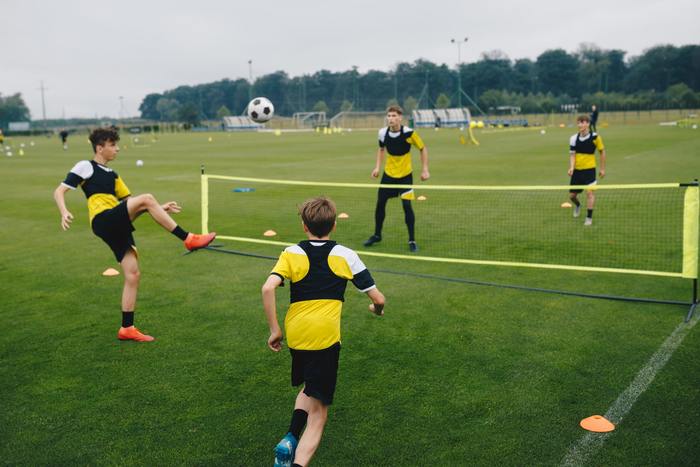 Soccer coaches are constantly trying to think of new ways to make their sessions a little bit different. Keeping players engaged in training sessions is crucial, and one of the best ways to do that is by regularly switching up the drills and exercises you're doing on the training ground. Moving from possession moves to shooting practice to positional work will sharpen focus levels and help players test out a variety of skills. But where exactly do games come in?

Fun, light-hearted soccer games can play an important role in the delivery of an effective training session. By offering a bit of light relief in the form of a game that's less focused on sorting out tactics for Saturday's match and more interested in just relaxing and letting off a bit of steam, team morale can be given a serious boost. And one of the best games you can play on the training ground is soccer tennis.

In this article, we'll explain the concept of soccer tennis, instructing you on how it works, the history of the game, and how prospective coaches can set it up within their sessions. We'll explain the benefits of soccer tennis and give you some simple steps on how to play it. By the time we're done, you'll be channeling your inner Roger Federer or Andy Murray next time you're on the soccer field.

What Is Soccer Tennis?

Soccer tennis is a game that's played by all sorts of soccer teams all over the world, from Premier League stars down to kids playing in local youth teams. It can break the monotony of a training session, but it's also a way of practising certain technical skills. However, you might be surprised to learn that soccer tennis is also a formalised sport in its own right.

Yep, that's right; soccer tennis is governed by an international body, with regular competitions and high-level players. It's not just playtime for professional footballers (although this video of Bayern Munich players Thiago and Ivan Perišić bossing a game against David Alaba and Kingsley Coman is a fascinating watch). So how exactly does the game work? Let's look into the soccer tennis rules.

Also known as 'foot tennis', 'football tennis', 'tennissoccer' and 'futnet', a game of soccer tennis is very similar to a normal match of tennis. It uses a small rectangular court divided by a net, with a team on either side of the net. Teams can consist of one, two, or even three players, and the aim is simple: win points by making the ball bounce in the opponent's half in a way that prevents them from successfully returning the ball over the net.

To kick off the contesting of a point, players will serve from the baseline using any part of their body except the hand or arm. On the serve, the ball must travel over the net and hit either the ground or an opposition player. Players can use any body part except the hand or arm to play the ball; heading and chesting are both a big part of the game.

In the double and triple format of the game (the most common types), each team is allowed to have three ball touches, but no consecutive touches from a single player. You'll often see one player control the ball, the other lay up a shot, and the original player then return the ball to the other side. The number of players also helps determine the size of the court; single and doubles games are played in a court of 3.6 x 9 metres (12 ft x 30ft), while triples matches are played in a 9m x 12.8m (30ft x 42ft) court. In the men's game, the ball can only bounce once on each side, while two bounces are allowed in the women's and junior's version of the game. But whatever format you're playing in, you're never allowed to touch the soccer tennis net.

A best-of-three set format is how winners are decided. To win a set, teams must score 11 points with a margin of at least 2 points. With a tiebreaker, the maximum score goes up to 15-14. To win a match outright, a team has got to win 2 sets. Best played on soft ground like grass, soccer tennis is a fun and relatively simple game to understand - particularly if you're already a tennis fan.

The History Of Soccer Tennis

You might be wondering where this game first came from. Clearly, it's been influenced massively by tennis, but what are the details behind its invention?

Czech Republic was the first country in which the sport was played. This was around a century ago back in 1922, when players at the Czech club Slavia Prague started playing a game they called 'Football over the rope'. As the name suggests, the game was first played with a rope stretched out horizontally, as opposed to a soccer tennis net.

It wasn't until 1940 that the official soccer tennis rules were set out. As the sport grew beyond Slavia Prague's training ground, the first Futnet Cup was organised in 1940, which in turn helped grow the game's popularity. Czechoslovakia formed its own league, called Trampská Liga, and some years later in 1961, football tennis was recognised as an official sport by the Czechoslovak Sports Oganisation.

But don't think the Czechs were the only nation interested in the sport. A huge boost for soccer tennis came in the 1990s, when the first European and World Championships took place, in 1991 and 1994 respectively. Organised by Union International de Futnet (UNIF) and the European Futnet Association (EFTA), the sport's central governing bodies, these tournaments were a massive success. Since then, the sport has continued to grow, and in November 2022, the World Championships will return, taking place in Prague's new multifunctional centre O2 Universum.

The Benefits Of Soccer Tennis

For soccer tennis to become so widespread, it has to have some pretty amazing benefits, right? For many people the game is just a source of fun, but in reality it's also a serious test for a range of different footballing skills.

Football tennis provides players with a great environment for practising a wide range of technical skills including aerial ball control, footwork, first-time passing, heading, volleying, and chest control. You need to be able to control the ball in tight spaces with limited touches. Judging the weight of your aerial passes and returning the ball to your opponents with accuracy and power is also crucial, as is coordination and communication between teammates. These skills all translate smoothly to in-game settings, whichever position you play in. Targeted, accurate heading is useful for both strikers and defenders, while close ball control and first-time passing is essential for midfielders.

Futnet is also a great way to keep your fitness up. With lots of rapid movements and dashes for the ball, the game keeps you on your toes and offers a real cardio workout, particularly when you're playing against technically strong players. Soccer is about being constantly on the move, so great fitness levels are essential.

Another reason many professional football clubs incorporate soccer tennis into their training sessions is for morale-boosting. The game can improve teamwork, and most importantly, allow players to relax and have a bit of fun. This can have a really positive effect on team harmony, which can improve performances and results.

How To Get Started Playing Soccer Tennis

Now that we've given you all the basic information you need on the history of the sport and how to play it, here's a bit of practical guidance on bringing this game into your training sessions. Whether you're a coach, a player, or simply a football fanatic looking for a new activity to play with friends at a local soccer field or park, it's worth knowing how to get set up.

First things first, you need a net. This could be a standard tennis net, or a lowered badminton net if that's all you've got. It shouldn't be too tricky to find a suitable net at your local sports store, or order one online. If even that is a struggle, why not replicate those early Slavia Prague players and simply use a rope stretched out horizontally?

Mark out your court using cones. Ideally, you'll want at least eight cones, with one marking each corner of the court, and one on each side halfway between the court corner and the net. The more cones, the better, however; you want your court dimensions to be clearly visible for all players. Remember the standard size of a soccer tennis court is 3.6 x 9 metres (12 ft x 30ft) for singles and doubles, while triples matches use a 9m x 12.8 (30ft x 42ft) court.

Finally, you need a football and some players. That should be the easy bit! Divide into teams, and get playing! If you find the game difficult at first, try changing the size of the court or allowing for more touches and ball bounces. You could also use unlimited ball touches, which can be fun — this change allows players to perform all sorts of tricks, flicks, and skills.

A few Soccer Tennis tips before we go

To wrap up, here are a few useful tips that will improve your soccer tennis skills:

Want to find out more about another classic football training session routine? Check out our guide to the rondo, a soccer drill that everyone should know.