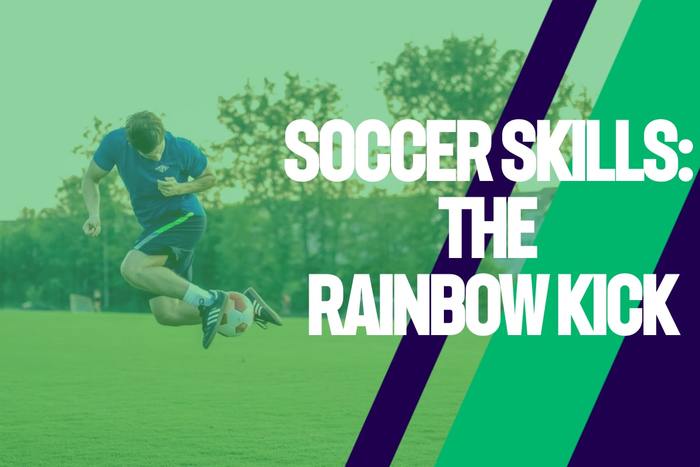 Outrageous skills, tricks, and flicks are part of the excitement and drama that makes soccer the world's most popular sport. While dazzling team moves and passing play can lift a crowd onto its feet, so too can a moment of individual brilliance from one special player.

And when it comes to impressing fans and teammates alike (although not usually opponents), the rainbow kick is one of the flashiest moves in the book. A super cheeky trick that has had a negative reputation amongst many in the game, the rainbow kick soccer skill has been at the center of some fascinating moments in professional soccer over the years.

Later on in this article, we'll be diving into some of those specific moments that have made the rainbow flick one of the most controversial soccer moves there is. But before we get into that, we'll be telling you everything you need to know about what this trick entails, as well as showing you how to do it yourself. Sound good? Then read on. . .

What is a Rainbow Kick?

The rainbow flick isn't something you see every day, but when you do, it's pretty special.

This skill has gained notoriety for its ability to humiliate defenders, enrage coaches, and make the skillster look like an absolute maestro. A skill that's often performed in street football or futsal rather than in a professional football match, it's an incredibly difficult trick to perform.

Essentially, the rainbow flick involves using one foot to roll up the ball on the other leg (usually up the calf), before using the other leg to lob, or flick, the ball over the head of the opponent you're facing. All these steps need to take place in one super swift motion in order for the attacking player to pull it off effectively, so any player that tries it needs to be extremely confident.

This trick gets its name from the fact that when this ball is lobbed in an arc over the opponent, it follows the rough trajectory of a rainbow. Nice, right?

Put into words, it can sound a little complex, but when put into action successfully on the field of play, the rainbow soccer skill is fast, slick, and over in the blink of an eye. The most competent players will pull it off so quickly that defenders are left rooted to the spot, wondering what's just happened.

Soon, we'll explain the details of how to perform this trick, but let's first dig into the history of the rainbow soccer skill a little more.

Who invented the rainbow kick?

The rainbow flick is all about the individual, so it's no surprise that over the years it's not only been associated with a whole load of players but it's also had its name credited to a few of them.

As well as being called the reverse flick-over by some, this audacious skill has been called the Ardiles flick in the UK (after Spurs player Ossie Ardiles), the Okocha-Trick in Germany (after Jay-Jay Okocha), as well as the Coup du Sombrero in France, and the Carretilha or the Lambreta in Brazil.

However, none of these players have the honor of being the man to have invented the famous rainbow kick (or at least performed it for the very first time). That title lies with the famous Santos winger Alexandre de Carvalho, nicknamed 'Kaneco'. In a 5-1 win over Botafogo SP in March 1968, Carvalho made headlines by using this skill, and set in motion decades of copycat performances.

Let's explore some of the players that have added to the fame of the rainbow kick skill.

Alexandre de Carvalho may have introduced the world to the rainbow flick, but it was former Nigerian international Jay-Jay Okocha who popularized the trick in England during the mid-2000s. As a renowned skillster for Bolton Wanderers in the Premier League, Jay-Jay Okocha ("so good they named him twice", as they said) encapsulated the showmanship of the move.

One notable instance came during a home game for Bolton against Arsenal in 2003. With Arsenal desperately searching for a winner, Okocha received the ball next to the corner flag, and rather than holding his guard, he performed an outrageous rainbow flick over Ray Parlour. Check out the video here - it's well worth a watch.

However, probably the most famous advocate of the rainbow kick ever is Brazilian international Neymar. A repeat performer of this skill, he's often got into trouble for using it due to the humiliating effect it has on opponents. Thankfully, for fans of the trick at least, that's never put him off.

At Santos, Barcelona, and PSG, Neymar has regularly pulled this trick out of the bag, and in one major incident against Athletic Bilbao, his use of it caused a major uproar. Known to go for a rainbow flick when there aren’t many options available or the game is approaching its end and his team is comfortably winning, Neymar has become the modern king of the rainbow kick; however, he's also reinforced the image of this skill as an incredibly disrespectful form of showboating, at least for some.

Is the rainbow kick illegal?

No. Whilst it may be looked upon as showboating or unsportsmanlike, it is not illegal.

In February 2020, a major controversy erupted when Neymar was booked for performing the rainbow flick during a match for PSG against Montpellier.

Neymar's side was thrashing their opponents 5-0 when the Brazilian performed a rainbow kick against two Montpellier players, and to the whole stadium's surprise, referee Jerome Brisard gave Neymar a yellow card for unsporting behavior. There's a video of the moment here.

Many people agreed with the referee's decisions, while others were of the opinion that extravagant skills like this were just a part of the game.

Ultimately, there are different cultural understandings of the skill. Former Barca boss Luis Enrique, for example, is not a fan of this kind of showboating: “In Spain, this is looked on very badly. If I was an Athletic player I would have reacted the same, or even worse", he once said in response to Neymar's rainbow flick against Atletico Madrid for Barcelona.

Despite all this controversy, the rainbow flick is not actually illegal. It's a form of showboating, and therefore in certain contexts, it may lead to a booking, but there's nothing strictly in the laws of the game to disallow it.

How to do a rainbow kick

Okay, it's that all-important moment: time for a guide on how to do a rainbow kick yourself. Here's our step-by-step guide to this soccer skill.

#1. Use your dominant foot to roll the ball up your opposite leg. Right footers will press the ball against their left ankle, before raising their right foot to move the ball up the side of the leg. Left footers will do the opposite. This needs to be done quickly and powerfully!

#3. Land on your dominant foot as you kick the ball with your heel - and lean forwards. The foot you used to roll the ball should land on the ground, while the heel of your other foot should kick the ball upward with your heel. Your dominant foot should hit the ground as your left heel kicks the ball, arcing it over your head. Again, this needs to happen very quickly — practice rolling and kicking over and over until your legs can generate the right amount of speed.

#1. Dribble the ball fairly quickly towards a defender. The rainbow kick can help you switch the direction of the ball just before a defender tries to steal it.

#2. Place your dominant foot's heel in front of the ball while leaning forwards just a little bit. If you don't lean forward, the ball will move backwards.

#3. Bring your other foot behind the ball, positioning the ball between your feet, ready for the trick to fully begin.

#4. Use your dominant foot to sweep the ball up the opposite leg. This motion should cause the ball to roll off the leg at the knee, before dropping down toward the heel.

#5. Lean forward and kick the ball up using your heel. Do this at the same moment you land on your dominant foot. The ball should arc up and over the defender, confusing them and giving you the opportunity to run onto it.

Still confused? That's totally understandable - it's a complicated skill. Check out this tutorial video for a visual representation of how to bring this impressive soccer skill to life.

Remember, this is an advanced trick that would take any player a lot of time and effort to master. Practice makes perfect, and the rainbow kick is certainly no exception.

Want to find out more about the skills and abilities of some of the world's most elite soccer players? Take a look at our guide to the fastest soccer players in the world in 2022.

Who made the rainbow kick famous?

The first player to perform the famous rainbow kick was Santos winger Alexandre de Carvalho (nicknamed 'Kaneco'), who used the move in a 5-1 win over Botafogo SP in March 1968. Since then, players such as Neymar and Ossie Ardiles have also been known to use this trick.

The kind of fun, expression, and attacking flair that we associate with skills like the rainbow flick can also be associated with a number of tactical strategies in soccer, none more so than Total Football. This fluid Dutch philosophy has had a huge impact on the game over the years. Check out our article on Total Football for more information on the subject.