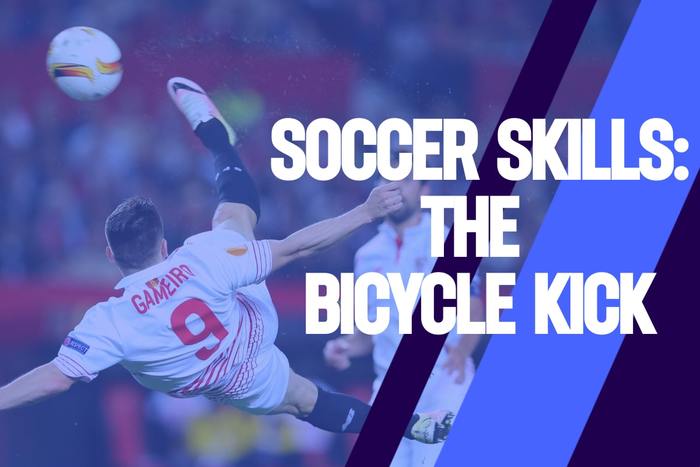 In our series of articles on the world's most famous soccer skills, we've covered a wide range of topics. From basic moves such as the stepover to more complicated tricks like the rainbow kick or the trivela, there are a variety of skill moves that can be used to gain an edge on the soccer field.

Whether you're trying to confuse an opponent or move yourself into a particular area of the pitch, player intentions can also vary immensely. On many occasions, soccer skills can seem as though they're being used primarily for show — and that can sometimes be the case for the technique we'll be discussing in today's article, the bicycle kick. Today, we'll explain what a bicycle kick is, when it can be used, and where it came from, before giving you some pointers on how to perform a bicycle kick yourself. Let's get into it.

What is a Bicycle Kick?

The bicycle kick is one of the most acrobatic skills a soccer player can do. It involves striking the ball in mid-air, almost always as a shot. This is done by throwing the body backward up into the air with your back to goal and using a shearing motion to move your striking leg in front of the other before kicking the ball behind your head.

This type of shot requires serious technical skill. Its purpose? Well, when used in the right kind of situation, the bicycle kick can help make up for an imperfect pass or cross by repositioning the striker's body so that they can redirect the ball towards the goal even with their back to it.

As you might imagine from reading that description, this can be a pretty dangerous move to perform, especially if you're not experienced. Generally speaking, only the most confident and athletic players are capable of scoring a goal using this technique.

The complexity and difficulty of the technique, coupled with the rareness of seeing a player attempt it (let alone score a bicycle kick goal), means that the overhead kick has become one of the most celebrated and legendary skills in the sport. 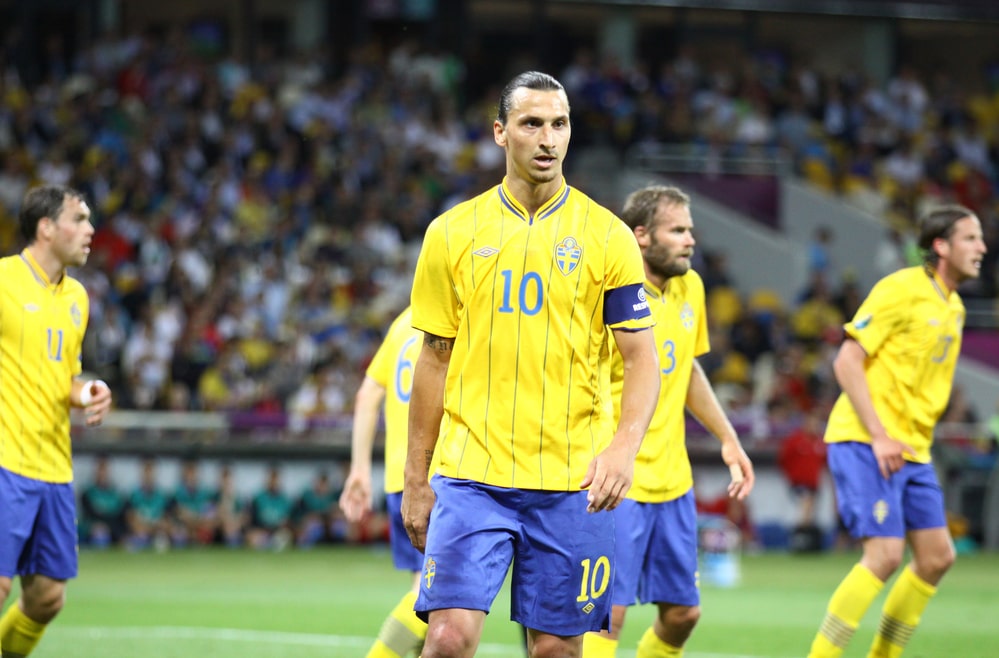 Why is it called a Bicycle Kick?

There are a number of different terms that can be used to describe this skill. The bicycle kick is probably the most well-known, although the "scissor kick" is another very popular name for this technique, as is the "overhead kick". In most languages, either the cycling motion or the scissor motion is what gives this trick its term, and it's easy to see why.

When a player lines themselves up in preparation for this move, their legs achieve a shape that resembles that of a pair of scissors, creating a shearing motion when they kick the ball. This movement also looks a little like the pedalling motion of a bike, hence the name behind the bicycle kick definition.

Here are a few examples of terms used to describe a bicycle kick in different parts of the world:

Perhaps the most interesting point we should make regarding the name of this skill comes from a battle about its origins. In South America, arguments between Chile and Peru about the roots of the bicycle kick (spurred on by the two nations' pre-existing sporting rivalry) have been ongoing for many years. Chileans call it the "chilena", while Peruvians call it the "chalaca". But we'll discuss this in more detail shortly, as we delve into the history of the bicycle kick.

The History of the Bicycle Kick

Like many other renowned soccer skills, there is a fascinating history behind the bicycle kick and its role within international soccer. As we've just touched on, a fierce South American sporting rivalry has shaped the evolution of the skill. But how did it come into the game in the first place?

The first-ever footballing bicycle kicks were performed in matches between laborers from the Pacific seaports of Chile and Peru, probably in the late 19th century. This reflected a broader phenomenon of the time, as South American players adapted the game of association football to their own styles following its introduction by British immigrants in the mid-late 19th century.

Various opinions and beliefs exist regarding the skill's exact origins, but one thing that's for sure is that it's a reflection of a period of serious South American innovation in association football skills and tactics, from the rise of dribbling to the invention of tricks such as the rabona.

However, it wasn't until the mid-20th century that the overhead kick was popularized by Brazilian players such as Pele and Leonidas da Silva. Pele in particular played a huge role in growing the legendary status that surrounds this trick shot within the world of soccer, after scoring a number of overhead kicks during his long career, perhaps most famously in a 1968 match between Brazil and Belgium.

In fact, the Pele bicycle kick became such an iconic move that it was replicated with the man himself during the 1981 cult soccer film 'Escape to Victory'.

In recent years, there have been many famous examples of the bicycle kick in action, with some of the most talented people to have ever played football producing spectacular moments using this skill. From Wayne Rooney's iconic effort in the Manchester derby in 2011 to Zlatan Ibrahimovic's stunning 30-yard bicycle kick goal against England the following year, some incredible players have taken advantage of the famous scissor kick over the years.

Given the extreme quality of those players, it's only natural to ask: how difficult is the bicycle kick technique?

The skill we're focusing on today is one of the most difficult and risky tricks you can pull off on a soccer field. The fact that the most iconic overhead kick goals have pretty much all been scored by the world's best-ever footballers (Cristiano Ronaldo, Wayne Rooney, Pele, etc.) is a testament to just how tricky it really is.

Even at the World Cup, the sport's most prestigious international competition, it's rare to see this move; generally, you'll be more likely to see it in the Champions League or elite domestic European games. The incredible Cristiano Ronaldo bicycle kick that rubber-stamped Real Madrid's 3-0 Champions League win against Juventus in 2019 is a great example of this.

Essentially, this is a skill for serious pros. But that doesn't mean you can't develop the technique yourself! It takes time, dedication, and above all a good grasp of how to do it safely, but it's possible for amateur players to access the magic of the famous bicycle kick too. Let's look at how to perform this trick shot yourself.

One of the most famous bicycle kicks of all time belongs to the legendary Cristiano Ronaldo, when in the 17/18 season he completed this bicycle kick goal for Real Madrid versus his future employers - Juventus - in the quarter-final of the competition.

How to do a Bicycle Kick

Performing the bicycle kick soccer skill effectively is no mean feat. However, if you put the work in, it can certainly be accomplished. In this section of the article, we'll work through how to do a bicycle kick yourself.

Follow these simple steps and you'll be good to go.

Step #1: Turn your back to goal. When you strike the ball, you'll be directing it over your head, in the opposite direction to the way you're facing.

Step #2: Use your kicking foot to push into the air. This kicks off the pedaling motion that your other foot will follow with. And when your weaker foot comes up, you want to lift it as high as possible.

Step #3: When you're in mid-air, throw your body backward. Dip your head and shoulders backward, and try not to fall back too fast. As you do so, lift your kicking leg up straight. As your momentum shifts backward, "bicycle" your legs to bring your non-kicking foot back to the ground.

Step #4: Strike the ball using the ridge on the hardest part of your boot. Drive the ball with power behind your head, by kicking it on the opposite side of the ball to the goal.

Step #5: Brace yourself for impact with the ground. Put your arms out to break your fall and stop your back or head from hitting the ground hard.

Remember: only practice this move on grass. Trying to perform a bicycle kick on a harder surface like concrete or astroturf can be dangerous, and isn't worth the risk. It's important that you learn to catch yourself safely as well, so make sure you're bracing your body in the right way and using your arms to break your fall.

The best way to practice is to have someone else feed the ball into you before you strike it. That way, you can put your focus on your ball-striking technique, and have someone give you pointers on how you're shaping up for the shot. Not sure where you and your pal can go and practice? Check out our article on the dimensions of a soccer field for some simple steps on this subject.

We've got plenty of other informative content on our blog, too. Why not start off by checking out our guide to the most popular formations in soccer?

Is the bicycle kick the hardest soccer skill?

There are several very difficult soccer skills that only the best pros will tend to use, and the bicycle kick is certainly one of them. Other high-end tricks include the rainbow kick and the rabona, amongst others.

The rainbow kick is a famous and highly controversial soccer skill favored iconically by players such as Barcelona's Neymar and Bolton's Jay Jay Okocha. It involves rolling the ball up one's leg before flicking it over the opposition defender's head. Check out our guide to the rainbow kick here.

The rabona is a soccer skill used famously by players such as Giovanni Roccotelli and Erik Lamela, which involves wrapping the kicking foot around the standing foot before kicking the ball.