The Fastest Soccer Players In The World (2022) 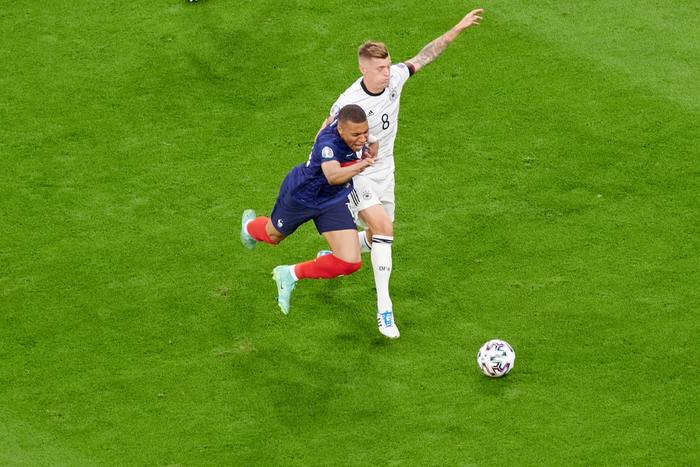 In the modern era, elite-level football players are some of the best athletes on the planet. Given the high-intensity nature of each game, with most players running at least 10km over the course of 90 minutes, this is a must. But when it comes to athleticism, there are lots of different elements to consider, one of which is speed.

Speed can give players a huge advantage on a football pitch, both in terms of attack and defence. And while it can be trained and refined as a physical attribute, it's also something that often comes naturally. That certainly seems to be the case when it comes to the fastest football players in the world.

In this article, we'll be looking at some of the fastest soccer players on the planet and exploring the top speeds they are capable of reaching. We're also going to be asking the all-important question: who is the fastest football player in the world?

The Power of Speed

Speed is arguably the most important fitness component within football. There are a few basic advantages that are gained from being faster than your opponent:

There are plenty of other more specific situations in which being one of the fastest players on the pitch can be extremely helpful. In attacking counter-attacks, for example, speed helps forwards rapidly move up the pitch and create overloads in dangerous areas. Meanwhile, having a pacy defender can help reduce this threat.

Speed has always been important in football, but arguably nowadays it plays more of a role than ever before. With extreme physical fitness a necessary requirement in the highest echelons of the game, any athletic advantage that can be gained should be exploited. So who in the world of football is making the most of their speed?

The Fastest Football Players in the World (2022)

Next up, we're going to take a look at some of the most impressive speedsters in the world right now. We'll start off by looking at the fastest Premier League players, before moving on to the rest of the top leagues across Europe and the rest of the world.

Where else to start but with Norwegian wonderkid Erling Haaland? Manchester City's new £51m signing from Borussia Dortmund has been stunning the world of football over the past few years. His scoring record is out of this world, and his physical profile is unbelievable.

Standing at 6 feet 4 inches (or 1.94m), Haaland's tall stature allows him to win headers and dominate aerial battles. However, having this sort of height often makes it more difficult for people to accelerate quickly and achieve high levels of speed. This is not the case for Haaland, who without a doubt is one of the fastest players in world football. Let's dig into his stats a little.

The speeds generated when Haaland surges towards goal are remarkable considering his height. His top speed stands at 36km/h, which was recorded during a Dortmund win over Vfb Stuttgart in the Bundesliga. His rapid speed has also generated plenty of discussion online; one particularly impressive sprint against PSG in the Champions League gained serious recognition on Twitter. 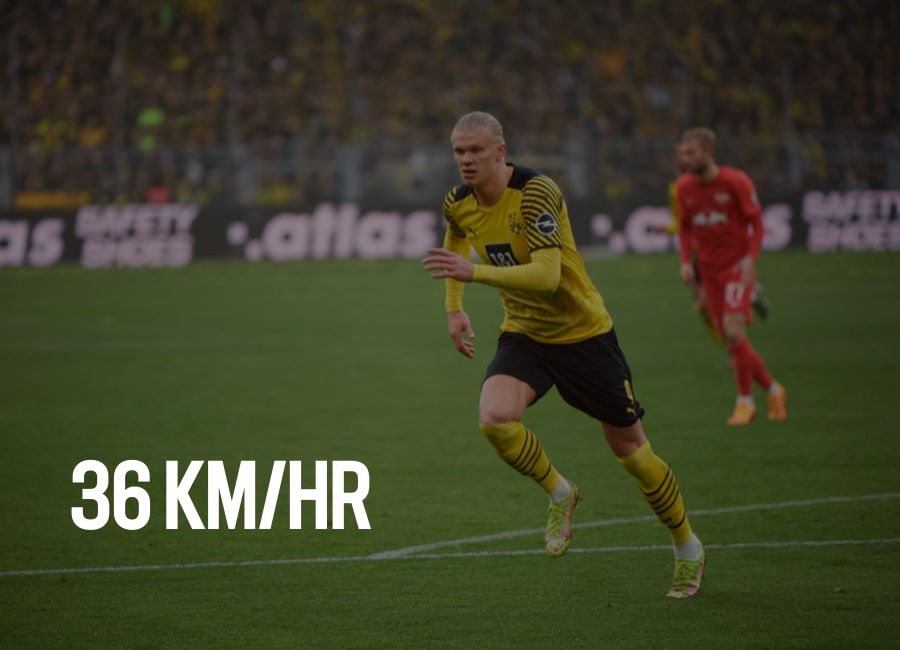 During his four-year spell at Wolverhampton Wanderers, winger Adama Traore has become well-known for his ability to beat players in 1v1 situations (he's arguably one of the best 1v1 players in the world). After a stint at Barcelona last season, it's unclear where the muscly wide midfielder will be playing next season, but if he remains in the EPL with Wolves, he's sure to be one of the fastest Premier League players during the 2022-23 season.

Traore is a top physical specimen who possesses a crazy amount of power, acceleration, and pace. Not only does he have strength in abundance, he's also one of the fastest football players in the world, with a top speed of 38km/h. 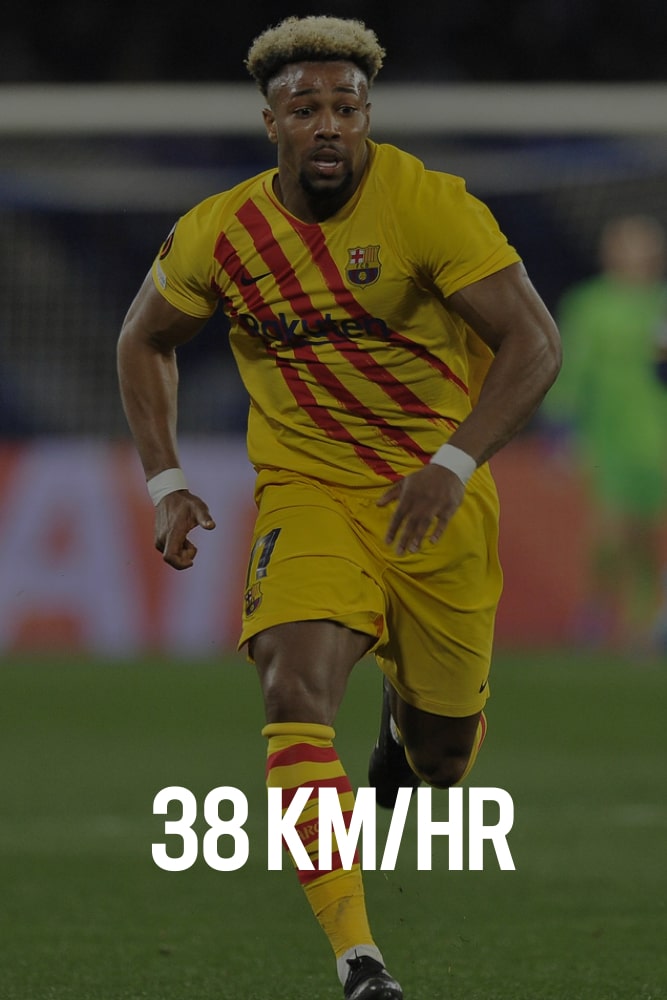 When we think about the world's fastest soccer players, we'll tend to primarily think about attacking players who love bursting forwards and rinsing opposition defenders. But speed is equally important in defensive areas, and at his best, Manchester United's Aaron Wan Bissaka has shown how having that bit of extra pace can prove a serious advantage in 1v1 defensive situations.

One of the world's best full-backs when it comes to tackling and intercepting, Wan Bissaka has a lot of pace in his locker. He's really not too far off Wolves' Adama Traore, with a top speed of 37.59km/h. As Erik Ten Hag seeks to reshape a faltering Manchester United side, Wan Bissaka will be hoping this key physical attribute will help him secure a spot in the starting XI.

This one might come as a slight surprise. Manchester City's Phil Foden is a player we'd usually associate with silky footwork, close control, and sharp passing, rather than blistering pace. But what allows his technical skills to shine is an ability to work with real speed. The 22-year-old, who already has a number of trophies under his belt, is one of the fastest players in the Premier League.

Agile, highly technical, and a great decision-maker in the final third, Foden is one of England's brightest young talents. In 2019, he clocked an impressive top speed of 37.12km/h, and he doesn't seem to have slowed down at all since then.

You might have been waiting a little while to hear this name. World Cup-winning forward Kylian Mbappe is one of the world's greatest footballers right now, and he's likely to go on to win many trophies in coming years. The French international has been pivotal to PSG's recent success in Ligue 1, and aside from his prolific goal-scoring, one of the attributes he's most regularly associated with is his incredible speed, both on and off the ball.

It's a pretty special sight when Kylian Mbappe hits top speed and charges past a long line of opposition defenders. But how quickly can he actually go?

Mbappe's top speed is registered at an astounding 38km/h. This speed was reached during a 2019-20 match against AS Monaco (his former club), in which he breezed through a group of Monaco players with blistering pace before hitting the net (one of 3 goals he scored in that match). It's fair to say Mbappe is one of the fastest players to have ever graced a football pitch. Check out this video for tons more examples of Mbappe's insane pace. 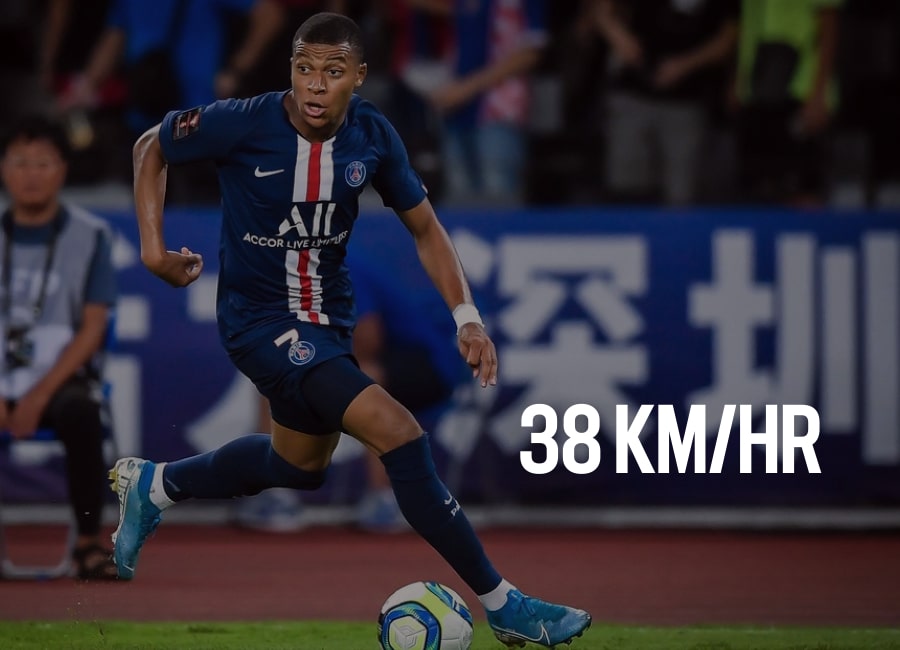 The German Bundesliga also contains some serious speed demons, and Bayern Munich's Alphonso Davies is the best of the lot. The inverted full-back was instrumental in helping his national team Canada qualify for the 2022 World Cup, their first since the 1986 World Cup in Mexico.

It was on a snowy evening in Munich last February that Alphonso Davies showed the world just how ridiculous his speed levels can be at times. In a match against Arminia, a defensive recovery run saw him reach a top speed of 36.51km/h to glide past an opposition forward and speed the ball out of the danger back to goalkeeper Manuel Neuer. You can check out the incredible sprint here, and if you keep your eyes out for Davies' efforts in the Bundesliga and beyond, you'll soon understand that he's one of the fastest players in the world right now.

Who is the Fastest Football Player in the World?

As you'll have seen throughout this article, when it comes to measuring who is the fastest football player in the world, things can get a little detailed. There is so little between some of the fastest athletes out there that the smallest of margins make all the difference. And if you've been playing close attention, you'll have worked out that the fastest football player in the world, according to current records, is Kylian Mbappe.

The French forward is capable of reaching speeds of 38km/h, and it's very possible that this outstanding record could be broken at some point. Many elite football players are incredibly speedy, and this can work as a serious advantage when they face up against opponents. While it's no substitute for tactical prowess and a football brain, it's certainly no harm.

If you've enjoyed this article, why not check out our guide to the 10 best panenka penalties ever? Or for something a bit more tactically-minded, take a look at our article on the role of the double pivot in football.