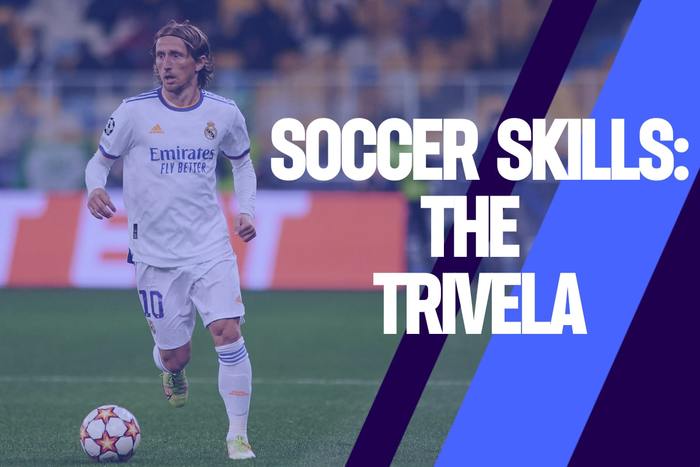 Soccer skills are very much the domain of the individual. Unlike the intricate managerial plans and strategies that shape different tactical approaches like gegenpressing or tiki taka soccer, glamorous soccer skills bring the focus onto specific players and their technical ability.

Whether it's the fluid pirouette of the famous Maradona turn, or the art of the "elastico", a skill move that always brings us back to the talent of Brazilian megastar Ronaldinho, many of the most impressive skills in the history of soccer are associated primarily with one player.

The same can arguably be said for the Trivela, a technique that's been used by many but perfected most famously by former Portuguese international Ricardo Quaresma. A tricky skill that is generally only attempted by the most technically gifted crossers of the ball, the trivela shot looks pretty outstanding when it's pulled off.

That's why in this article, we'll be giving you a comprehensive guide to this skill. We'll explain what the trivela is, where it came from, and why it's called a trivela, before providing a guide to completing this move for yourself.

What is a Trivela?

Norwegian superstar Erling Haaland's acrobatic winner against Borussia Dortmund in September made headlines for a couple of reasons. His decision not to celebrate out of respect for his former club impressed many fans, but perhaps what was most impressive was the pass which led to the goal.

Manchester City's Portuguese left-back Joao Cancelo picked up the ball around 10 yards from the penalty box and delivered an inch-perfect cross into the box with the outside of his boot. The technique was outstanding, and it's not the only match in which Cancelo has used it — check out this ridiculous assist vs Everton. What you may not have realized is that this skill has a name of its own. We're talking, of course, about the trivela.

The trivela is a shot or cross taken with the outside of the boot, rather than the usual instep technique. It can be used to achieve a certain amount of bend or curve, or to ensure the ball reaches a particular area with accuracy and the right level of pace. However, like many soccer skills, from the rabona to the step over, it's also partly about style and flair, plain and simple. 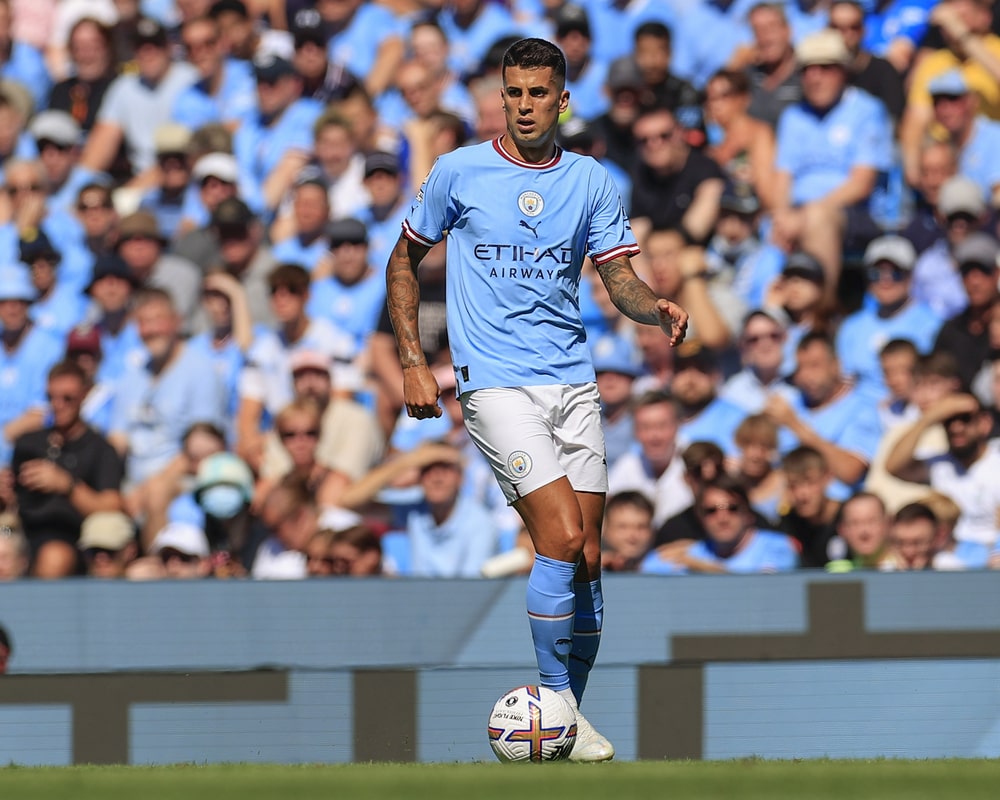 The trivela was pioneered by a player who burst onto the scene in the early 2000s after emerging from Sporting Lisbon's academy. While he may not have gone on to have the illustrious career of his counterpart Cristiano Ronaldo, the man in question has become a cult figure in Portugal and abroad, and is still operating at the top level, playing in the Primeira Liga for Vitória S.C, aged 39. His name is Ricardo Quaresma.

Quaresma, usually a left winger, was the first football player to truly make the outside-of-the-boot technique his own. In a Euro 2008 qualifier, his first international goal was scored using that method, as he curled the ball skillfully passed Belgium's goalkeeper Stijn Stijnen. Partly a mechanism for shifting the ball onto his stronger right foot, and partly a way of confusing defenders by generating curve and movement on the ball, the trivela became his trademark move, and there are tons of examples of him using it over to years to boggle the minds of opposition players.

Ricardo Quaresma last played for his national team in 2018, and it's fair to say he signed off in style. In a group match against Iran at the 2018 Word Cup, the winger curled a trivela shot into the top left corner from outside the box, stunning fans over the world. Fans of the famous trick will be pleased to know that the baton has been passed on. Cancelo continues to use the outside of the foot for various ambitious, highly skilled passes and crosses, although it's worth noting that he hasn't yet scored using the skill...

Why is it called a Trivela?

The trivela isn't the only name for this piece of skill. Like most other soccer skills, there are all sorts of different terms and phrases used around the world to describe it. In England, there isn't really a proper term, other than the uninspiring "outside-of-the-boot shot", but elsewhere things get pretty interesting.

The Brazilians call the trick "dos tres dedos", meaning "with three toes". Meanwhile, in Russia soccer fans refer to the skill as a "Shvedka", meaning "swede" — this is thought to have entered the country's footballing lexicon after the 1958 World Cup. Another interesting name for the skill comes from Nigeria, who call it a "NASA pass", capturing the idea that the precision and detail achieved by the skill could only be achieved by a NASA engineer.

One name has caught on better than all of these: the trivela. It's a nickname that the Portuguese, who have shown themselves to be the masters of the move, came up with. It tends to refer to the precise curve of the ball into an otherwise unreachable pocket of space on the soccer field, but the exact origins of the name are a little unclear.

How do you do a Trivela?

Players who are capable of successfully performing this skill are linked by one thing: they know exactly how to keep defenders guessing. If a player were to whip out a trivela shot or cross every time they got the ball, it would render the move useless, because it would be too predictable. Picking your moment and striving to do the unexpected is crucial.

With that advice in mind, let's explore a few useful tips on how to perform the trivela trick yourself.

It's super important that you approach the ball in the right way. Step to it from the side rather than completely straight on, and try to plant your standing foot a little further away from the ball than you normally would, in order to give yourself the space needed to generate the banana-shaped curve you want to achieve when you kick it.

Follow-through is crucial with the trivela shot or cross, because the success of the move revolves around generating enough power to direct the ball, as well as getting the spin on the ball that comes when a player strikes it with the outside of their boot.

Once you've struck the ball, follow through with your kicking leg, raising it high and generating the power needed to get the ball into the intended attacking zone.

You need to strike the ball in the right area, aiming for the outside of the football rather than the middle in order to achieve the right amount of bend. But one thing to note: the further away from the center of the ball you hit, the more power you're going to have to generate, so it's all about finetuning your strike in order to make sure you hit the sweet spot.

This point may come as a surprise to you, because it's where many people go wrong. Making sure your ankle is physically locked when you make your contact is where you get your power from. If your ankle is limp, it can lead to a really weak effort.

Perhaps the best piece of advice we can give you is to focus on technique as opposed to power when practicing this move. Don't just try to hit the ball as hard as you can — you've got to build your foundations first, getting your technique perfect when performing a trivela, and naturally the power will come as you continue to improve.

Keep those simple tips in mind and you'll be well-equipped to bring this technically impressive outside foot shot into your game.

Can you score a Trivela shot in FIFA 23?

If you're a big FIFA fan, it's possible you'll already know how much of a phenomenon the trivela has become within Ultimate Team in FIFA 23.

New to this year's edition of the game, the technique has become a favorite of many gamers, with FIFA 23 Ultimate Team now packed with skillsters who know exactly how to perform a trivela at the right moment. Here's how to execute this type of strike within your own game.

To use the trivela trick shot in FIFA 23, Playstation users will need to hold L2 + press Circle to shoot.

Meanwhile, XBOX users will use LT + B instead.

Whether you're aiming to dazzle your mates with a trivela shot next time you're playing against them on FIFA 23, or you'd rather utilize this trick out on the soccer field, you should now have all the tips you need to replicate Ricardo Quaresma's famous move.

Interested in learning about some other impressive soccer skills? Our blog is filled with a range of informative skills guides, from explainer pieces on the rabona and the rainbow kick, to more basic matters such as the step over or the rondo, a drill any soccer player should be familiar with.

How hard is the trivela skill?

The trivela is a soccer move that takes practice. It can be difficult to create serious swerve and bend while ensuring that you achieve enough power and most crucially hit the target. However, it's not the most difficult skill there is in soccer, and it's accomplishable by any good player that puts their mind to it.

The rainbow kick, or rainbow flick, involves rolling the ball up your standing leg using your other leg, before flicking, or lobbing the ball over the head of an opposition defender. It's a very tricky skill that we dive into in depth in our comprehensive guide to the rainbow kick.

What is a stepover?

The stepover is one of the more simple skills in the game, and it will usually be one of the first tricks learned by budding young attackers. It involves moving your foot around the ball and feinting in one direction before quickly turning and bursting off with pace. Check out our guide to the stepover here.