11 Unique Soccer Fields From Around The World 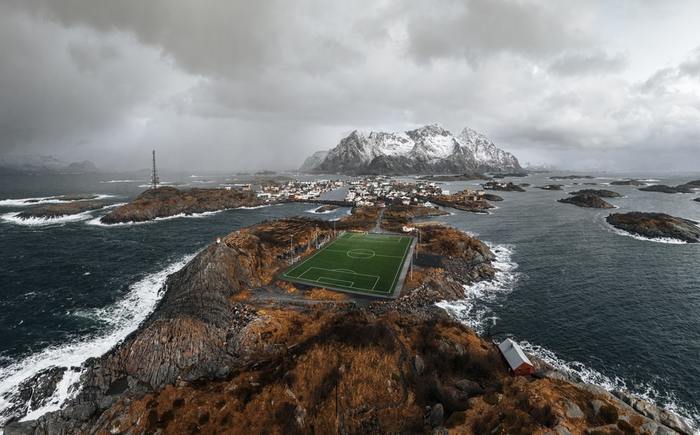 Association football, or soccer, is the world's most popular sport. It's played in huge stadiums in capital cities, in muddy parks in the countryside, and on the tiniest, most remote islands. Wherever you go, people are in love with the beautiful game.

That means that there are some pretty incredible locations out there for playing soccer. On every single continent, there are some special spots to watch live sports. In this article, we'll be guiding you through 11 of the most unique and amazing soccer fields from around the world. Picking out the most unique soccer field on Earth is a difficult task, but these 11 venues are a pretty good place to start. 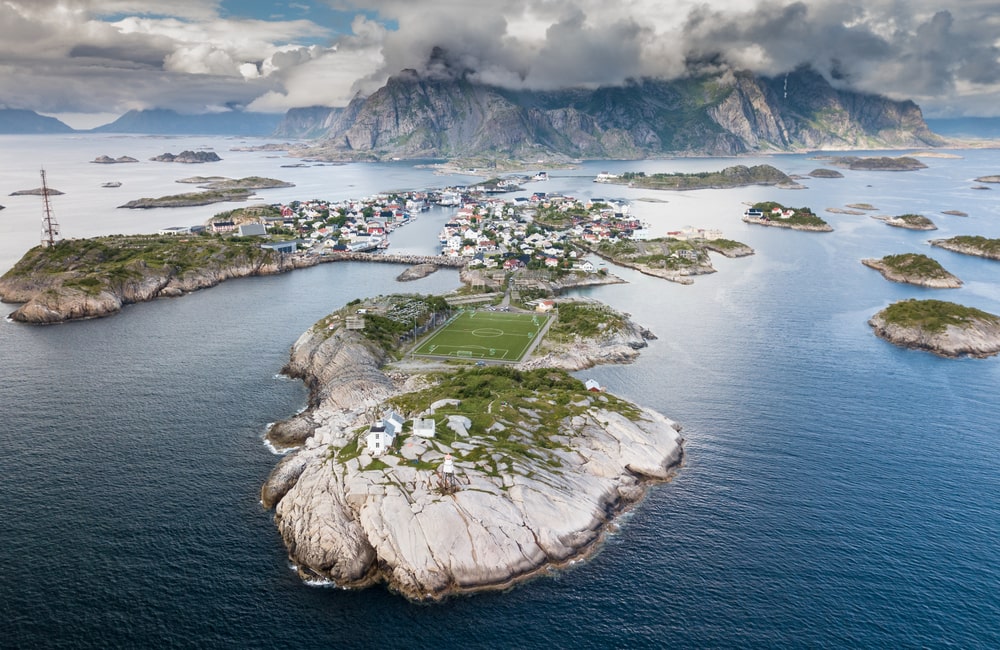 The Lofoften Islands are home to some of Norway's most stunning scenery. A rugged archipelago in the northern district of Nordland, it's packed with rugged mountains, picturesque views, and diverse wildlife. But most importantly (for us, at least), it's also the setting for one of the most amazing football grounds on the planet.

Overlooking the Norwegian Sea not far from the Arctic Circle, Henningsvaer Stadion is considered one of the world's most beautiful soccer fields. Attached to the small tourist resort and fishing village of Henningsvaer via a bridge built in 1983, the pitch is surrounded by sea. This means that the pitch's synthetic mantle and side grids are crucial when it comes to stopping balls from flying into the ocean. In a part of the world in which daylight can sometimes be in short supply, an ultra-modern lighting system is also a crucial addition. There are no stands, and the football on offer is strictly amateur-level, but that takes nothing away from the breathtaking beauty of this soccer field. 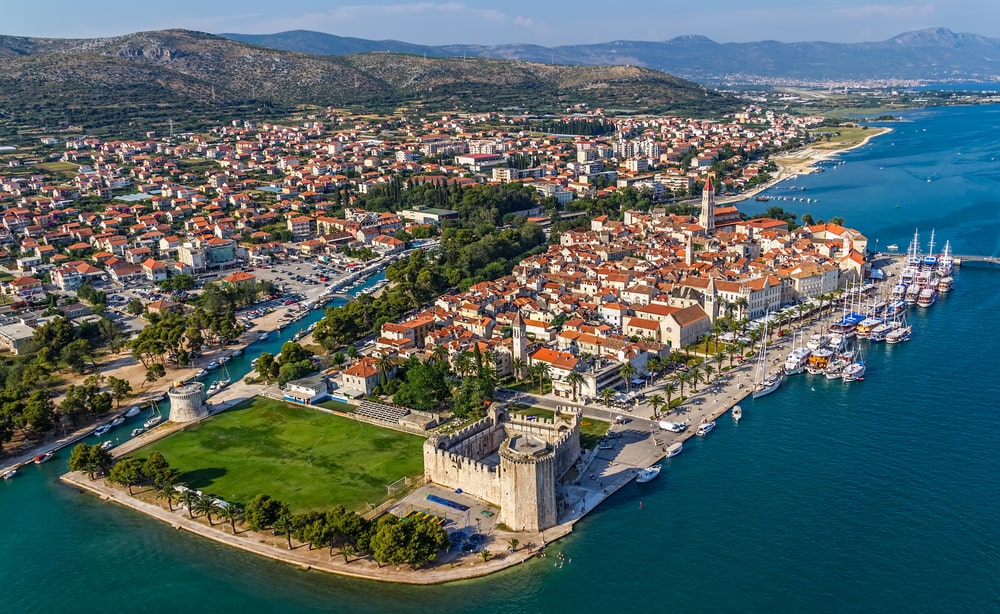 There's only one soccer field in the world that can boast the impressive claim of being nestled between two UNESCO-protected monuments. That honour lies with Croatian club NK Trogir (founded in 1912), whose 1,021-capacity ground Igralište Batarija sits between St. Marko Tower and 15th-century fortress Kamerlengo Castle.

Batarija recently received some serious upgrades, with a new artificial pitch being laid, alongside new floodlights, stand, and upgraded changings rooms and club houses. The multi-million kuna project was finished in 2019 and is now in full operation, but the new renovations have taken nothing away from the historic feel of this unique sporting location.

One Slovakian football ground has received a lot of recent online attention due to a highly unusual feature of its sporting spectacle. Tucked into the Slovak Ore Mountains in a remote part of central Europe is Čierny Balog, the home of Slovakian minnows TJ Tatran Čierny Balog. This remarkable little stadium has become famous for one particularly special sight: the appearance of a steam train during the middle of play.

Yep, you heard us right. The ground's main stand is separated from the pitch by the Čierny Hron Railway Line, which was originally constructed as a forest railway to help with logging operations. Nowadays, it's mostly there for tourist purposes, with groundhopping football fans relishing the opportunity to watch an old fashioned steam train chugging along the side of the pitch, blocking spectators' view (not that any of them are too bothered). For any soccer field obsessives desperate to visit the world's most crazy grounds, this is certainly one for the bucket list. 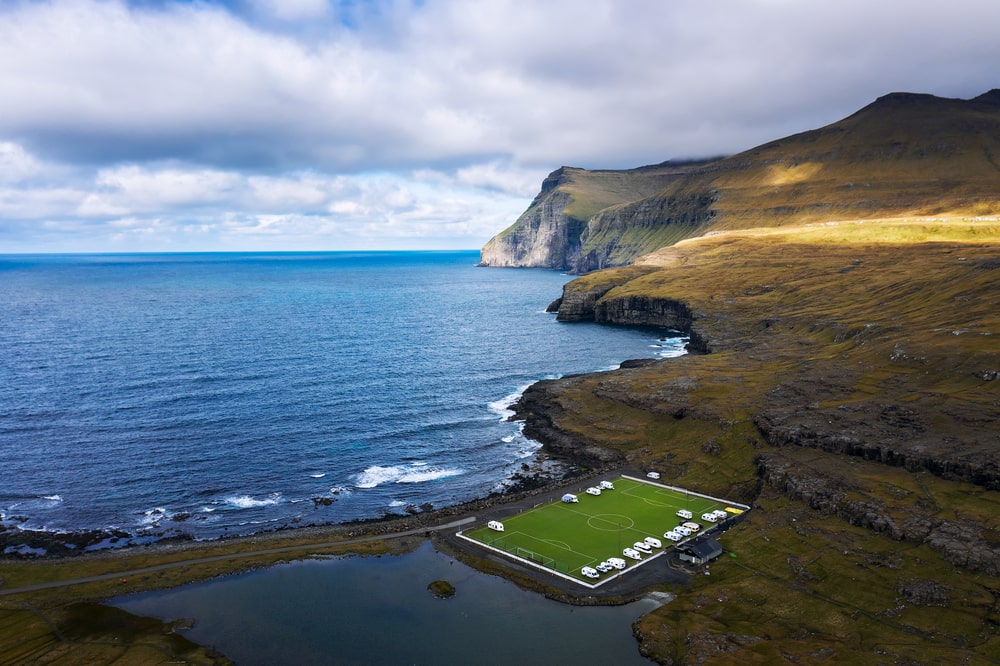 The Faroe Islands, a collection of 18 islands situated in the North Atlantic between Iceland and Norway, contains some amazing soccer fields. Perhaps the pick of the bunch is the Eiði Stadium, which was originally positioned on a cliff edge with stunning views over the North Atlantic Ocean, before being relocated to a slightly more central spot in the tiny village of Eiði.

Situated in the north-west of the island Eysturoy, Eiði has a population of just 700 people, and its pitch is used by local side EB/Streymur, a semi-professional club founded in 1993. With incredible views and one of the most secluded, remote locations you could hope for, this is one of the most unique places you could possibly enjoy a game of football. 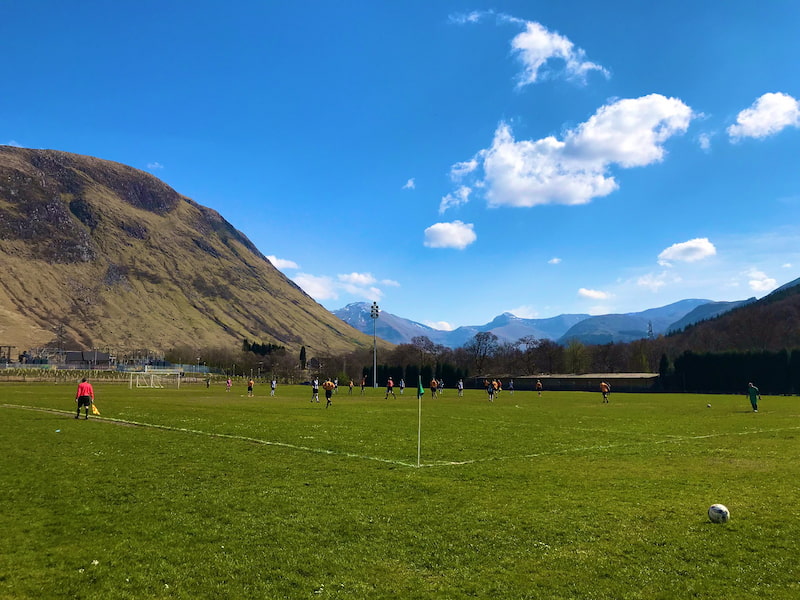 Claggan Park sits at the base of Meall an t-Suidhe, an enormous, snowy Ben Nevis foothill that highlights the huge stature of the biggest mountain in Scottish, the United Kingdom, and the British Isles. The small ground is where Fort William FC play their home matches, and the super-remote location doesn't often work in their favour on the pitch —since being admitted to the Highland Football League in 1985, the club has never achieved higher than 11th place. But visiting Claggan Park isn't just about the football; the natural scenery on show is some of the best you could see at a football match. 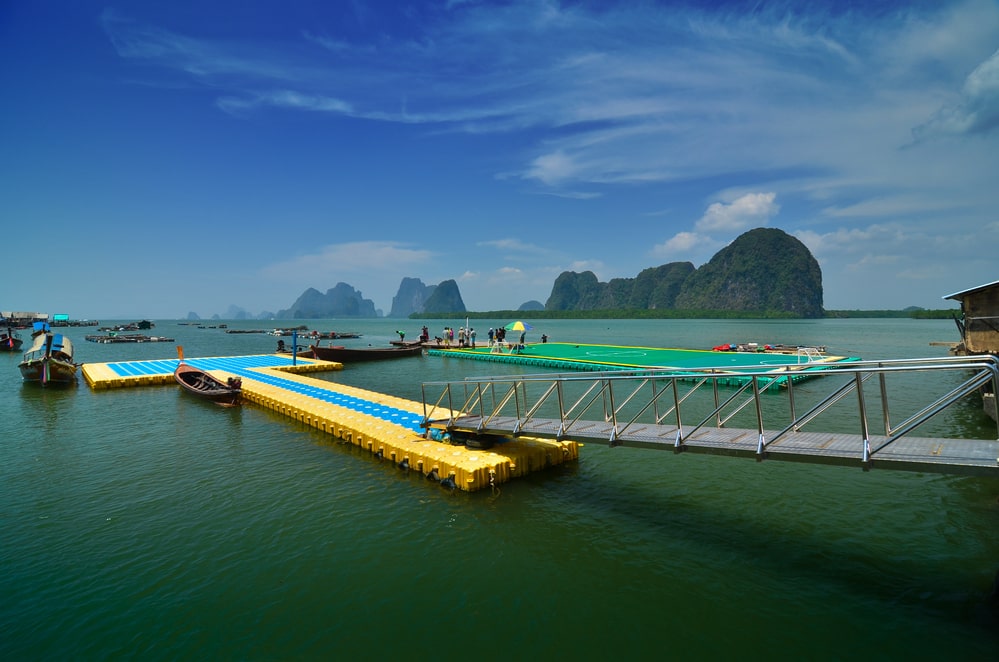 Thailand is a country of immense beauty, from the temples of Chiang Mai to the picturesque islands in the South. One unique location that has become a popular tourist attraction in recent years is the tiny village of Koh Panyee, in the Phang Nga Province in Southern Thailand. A fishing village of 1,685 people that was built on stilts by fishermen, it hosts one particular attraction for football fans: a floating football pitch.

The pitch was first built after the 1986 World Cup, when due to a lack of available land, a group of fans decided to build a pitch on water. At first, players struggled to compete against other teams with more resources, but over time Panyee FC grew to become a serious youth outfit. They've since won numerous regional championships, and provide local kids with a chance to play soccer in one of the most unique sporting venues in the world. This amazing story of community triumph and togetherness is captured in a great short film by TMB bank, available to watch here. 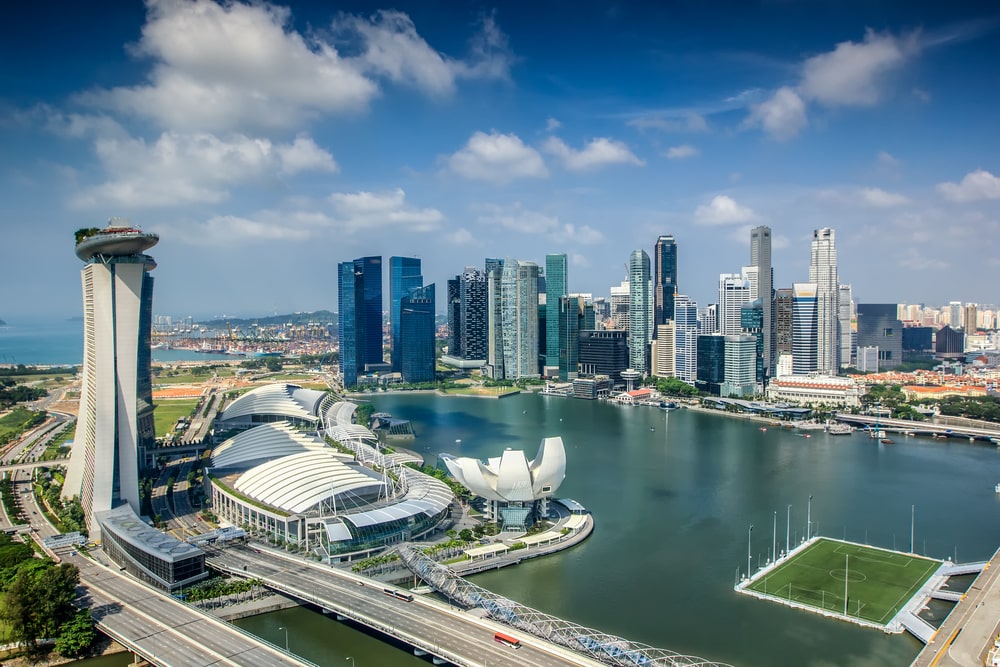 Kho Panyee village is a pretty special location, but it's not the only floating pitch out there. 1,250km south-east of the Thai settlement is Marina Bay, a large bay in the Central Area of Singapore. It's an area that has undergone extensive development in recent decades, with one of the most striking pieces of building work being the construction of 'The Float', a multi-purpose outdoor venue based on a steel platform in the Marina Resevoir.

Built in 2007 as an interim venue during the rebuilding of the National Stadium in Kallang, The Float consists of a 120m x 83m floating platform capable of holding the weight of 9,000 people, 200 tonnes of stage props, and three 30-tonne military vehicles. This is hardly necessary though, as on the adjacent shoreline is a 27,000-seat grandstand, making this a comfortable and highly unusual place to watch football. While plenty of other types of events are held here too, it's still fair to call this the world's largest floating football stadium.

Some sports stadiums are nestled in the ground, some on the coast pretty much at sea level. The Ottmar Hitzfeld Stadium in Switzerland, however, boasts the official title of the highest stadium in Europe. Home to amateur side FC Gspon, this stadium is situated 2,000 meters above sea level, tucked away in the beautiful Swiss Alps. It's an amazing location, set in a village with a sub-1000 population that's only accessible by cable car. The only downside is that the jaw-dropping cliffedge next to the pitch has claimed hundreds of lost balls, never to be seen again. 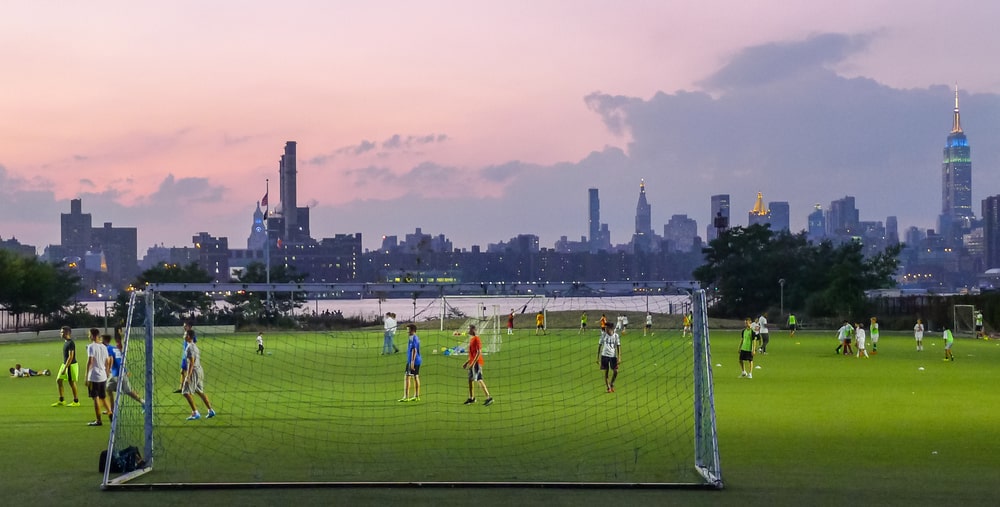 New York City is famous for its huge, green parks, but what you might not know is that one of those parks is also a pretty special spot for playing soccer. On Pier 5, Brooklyn Bridge Park's soccer fields provide locals with the opportunity to play matches against a stunning skyscraper backdrop. Right now, Brooklyn Bridge Park is the home of college outfit St Francis Brooklyn Terriers. 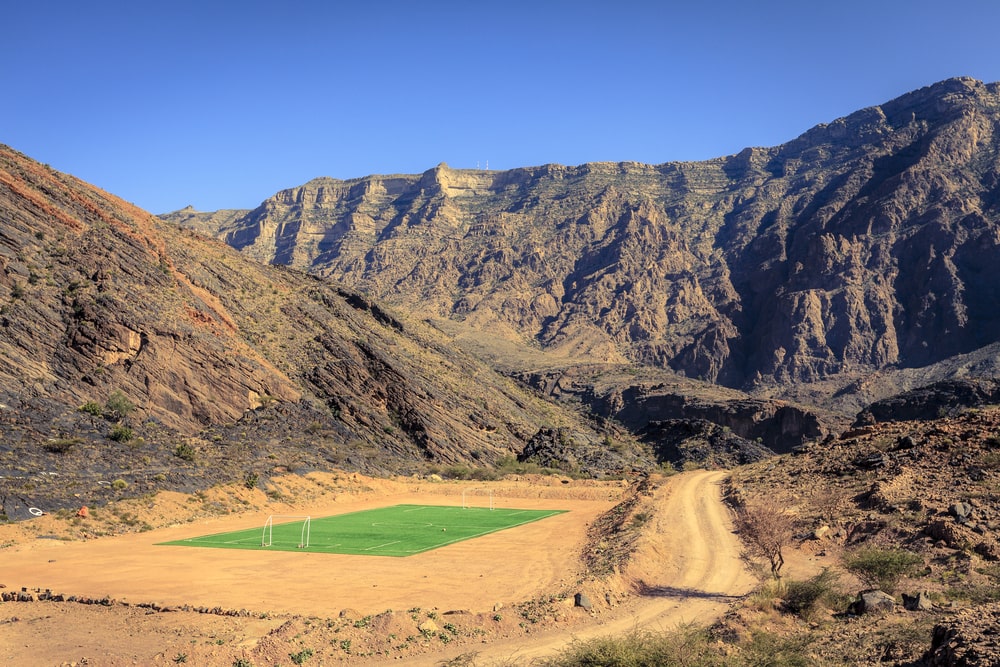 In the desert mountains of the Western Asian nation Oman sits one of the most unique footballing venues there is. The nearest village is Balad Sayt, and the story behind the creation of this unusual pitch might surprise you. Rather than being constructed as a local sporting venue, the pitch was built by Filmmaster for an Audi commercial in 2016 that focuses on a young fan dreaming of becoming a pro player. Practically, it was a difficult location to shoot in, but the long-term impact is that locals have a unique setting for a game of football whenever they fancy it.

The staggering mountain ranges, thick woodland, and remote communities of the Rhondda valley helped provide inspiration for J.R.R. Tolkein's Middle Earth, but Blaenrhondda Park is no fantasy. The ground is a council-owned facility used by Blaenrhondda AFC and a few other local sports clubs, a pillar of the local community. With miniature drystone walls acting as terracing, and the flat-topped Pen Pych Mountain offering an imposing backdrop, this little Welsh amateur ground is a truly unique venue for football.

Soccer Fields Near Me

Now, sadly most of us aren't lucky enough to live on the doorstep of one of these amazing grounds. Most of these stunning pitches have become popular tourist destinations in their own right. However, that doesn't mean you can't embrace the beautiful game in a spot that's a little closer to home. Here are a few simple steps for anyone hoping to find a local pitch:

You can access a range of benefits by getting down to a local soccer field. Soccer field dimensions can vary depending on the level of play, but there should be somewhere suitable near you to embrace the game. Whether you want to hone your skills and become a top player, or you're more interested in growing your coaching abilities, hitting up a local pitch is the best way to do it.