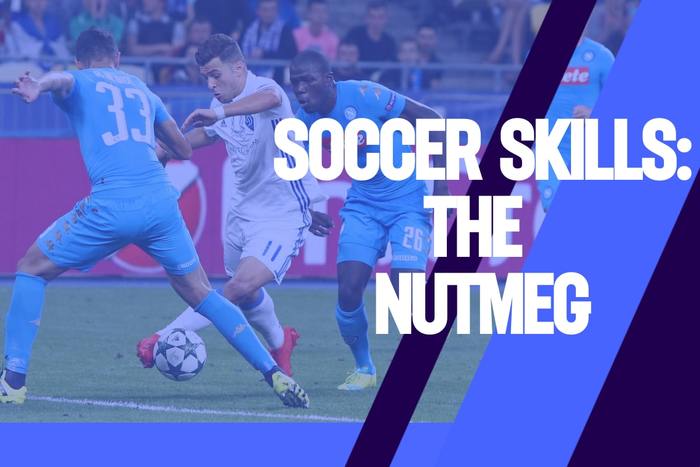 Anyone who's played in a local park, an inner-city concrete cage, or a tight futsal court knows the power of an ambitious, well-executed skill. They can demonstrate flair and humiliate opponents in equal measure; and when it comes to the latter of these results, there's arguably no better move than the nutmeg.

A classic skill known all around the world, the nutmeg encapsulates everything great about silky soccer tricks. In this article, we'll be providing you with a deep dive into the move. We'll answer the basic question "What is a nutmeg in soccer?" before shifting to some greater depth.

We're going to explore the creation of the nutmeg, and we'll offer a practical guide on how to complete this skill. For all the center-backs and full-backs out there, we'll also give you some top tips on how to defend against a nutmeg. Let's get into it.

What Is A Nutmeg In Soccer?

It's a famous skill that's simple in principle, but difficult to pull off in practice. So what is a nutmeg in soccer?

This iconic move is a dribbling skill that involves kicking the ball between the opponent's legs before running past them and receiving it on the other side.

It sounds simple, but it's an ambitious skill that only the most technical players tend to attempt. Known for being both visually impressive and highly effective in terms of beating an opposition player, it's a move that's been showcased on the world stage by a wide range of incredible attacking players, including Ronaldo, Ronaldinho, Neymar, Luis Suárez, and Lionel Messi.

Not only is the nutmeg a famous move in elite-level soccer, but it's also a super popular street football trick. Panna, a street football game that originated in the Netherlands and has been embraced all over the world (including by EA Sports' FIFA Street Video Game), has the nutmeg soccer skill at the center of its format.

A technique that can get people off their seats and humiliate opponents all in one impressive movement, the nutmeg soccer skill is up there with the most exciting tricks in the game.

Why is it called a nutmeg?

It's a weird name, right? There are several theories about the origins of the term "nutmeg" and why we've all come to know this legendary soccer players' move was given that name.

One of the earliest known uses of the term came in author and football lover Brian Glanville's 1977 story A Bad Lot, although a bit more digging finds that while it may not have related specifically to football, the term "nutmeg" was used way back as Victorian slang for being duped or conned.

This use of the word was explained in Peter Seddon's book, Football Talk - The Language And Folklore Of The World's Greatest Game, which stated that in exports between North America and England, "Nutmegs were such a valuable commodity that unscrupulous exporters were to pull a fast one by mixing a helping of wooden replicas into the sacks being shipped to England. Being nutmegged soon came to imply stupidity on the part of the duped victim and cleverness on the part of the trickster."

In soccer, it's certainly true that the victim of a successful nutmeg can end up looking a bit silly. However, the meaning of the word doesn't strictly relate to this old-school origin.

In cockney rhyming slang, the word nutmeg is used to mean leg, while many explanations go a little lewder. For instance, Alex Leith's book Over the Moon, Brian - The Language of Football" explains how nuts refers to the testicles of the player through whose legs the ball has been passed." According to him, "nutmeg" is just an extension of this term.

Whatever you believe, the term has taken hold in the English language. That being said, this soccer skill has a ton of other names that are used around the world. In Spanish-speaking countries like Spain, Argentina, Colombia, and Mexico, it's called "caño" (spout, pipe), "túnel" (tunnel), or "cocina" (kitchen). In Denmark, Sweden, Norway, and Italy it's known as "tunnel", while Egpyt and Saudi Arabia call the skill "kobry" (كوبري) meaning "bridge". Koreans have perhaps the most interesting name for the nutmeg, with "Alggagi (알 까기)" (hatching an egg).

But that's plenty of speculation on where the nutmeg came from and how it's been referred to across the globe. Let's spend some time talking about the most talented players known for using this special little trick.

Famous advocates of the nutmeg skill

Disrespectful yet beautiful to watch when pulled off effectively, the nutmeg has been a favored trick of world-class attackers for many years now. Below are a few of the elite players who have been known to utilize it on the biggest stage.

It’s hardly surprising that arguably the greatest player of all time has some silky skills in his locker. And while the multi-Champions League winning Barca legend likes to keep his dazzlingly intricate dribbling and passing moves simple when possible, that doesn’t mean that he’s reluctant to pull off a cheeky nutmeg from time to time.

A Brazil legend who inspired a whole generation of strikers around the world, Ronaldo was known not just for his wonderful goalscoring abilities, but also for his dribbling skills. The former Real Madrid and Inter Milan man regularly spiced up those mazy dribbles with a nutmeg - check out this video for some great examples.

Surely one of the greatest strikers to ever play in the Premier League (not to mention his phenomenal record in Spain with Atletico Madrid and Barcelona), Luis Suárez is an absolute legend in his home country of Uruguay. He's also known for being one of the biggest advocates of the nutmeg skill; in fact, his love of the technique is so legendary that at Liverpool, fans would hold up banners saying "Luis Suárez could nutmeg a mermaid". This video has a few of his nutmegging highlights.

How to do a nutmeg

Want to emulate those iconic pros? Don't worry — we've got you covered.

Here are a few simple steps and tips that will allow you to practice the nutmeg skill next time you take to a soccer field. Follow them and you'll be set to impress anyone lucky enough to be on the scene at the time.

Step #1: Approach the defender from an appropriate angle. If their position is square on to you, there's more likely to be a visible gap between their legs. If you're side-on from them, that gap is going to be smaller.

Step #2: Wait for the right moment. You need to be certain that there's enough space behind them to wriggle into once you've pulled off the move, and you want to make sure you're not under pressure from other opponents who could nick the ball off you.

Step #3: Ensure the gap between the defender's legs is wide enough and that you've got adequate space to move into, then . . .

Step #4: Pull off the trick! Kick the ball gently between the legs of your opponent, ensuring there's enough power on it to get the ball to the other side, but not so much that it runs on and gets picked up by another player. To complete a successful nutmeg, you need to be the one to receive the ball on the other side.

Here are a few other handy tips to bear in mind when practicing and performing nutmegs:

Catching a defender diving in can take patience and great timing. But when you're in those moments, a nutmeg is one of the best skills there is. So how exactly are defenders supposed to stop it?

How do you defend against a nutmeg?

As we mentioned earlier on, a defender is in more danger of being nutmegged if they're standing too square on. Not only will the gap between their legs be bigger in this position, but they're also more likely to be caught off balance one way or the other.

Instead, defenders need to jockey their opponent, using a staggered position that reduces the opening between the legs and allows you to move laterally better. Keep the knees bent, stay on your toes, and be ready to move in any direction.

A good rule of thumb is to try and keep your feet a ball's width apart, with one foot in front of the other. Keeping the gap between your legs to a minimum without losing balance by having your feet super close is the key. Getting this right can be difficult, but that kind of staggered position will work against most attackers.

So there you have it! Not only how to perform a nutmeg, but how to defend against one, too.

Our website is packed with loads more useful skills content and coaching points. Start by checking out our guide to the rondo, a classic training drill that everyone should know.

Who invented the Nutmeg?

Lots of different theories and ideas exist about the origins of the nutmeg. Ultimately, no one knows exactly where it first came from. That hasn't stopped a wide range of elite players from perfecting it and adding it to their arsenal, from Ronaldinho to Luis Suárez.

How difficult is it to do a nutmeg?

The nutmeg can be executed in a number of different ways, but it can be as simple as a one-touch knock between the oppositions legs.  Check out our articles on the rabona and la croqueta for some information about two advanced skill moves.

How do you defend against a nutmeg?

Defending against nutmegs is all about keeping a staggered position, with one foot in front of the other about a ball's width apart. Jockeying your opponent in this way with a reduced gap between your legs will help prevent you from getting caught off balance and nutmegged.