10 Soccer Books To Broaden Your Knowledge Of The Game 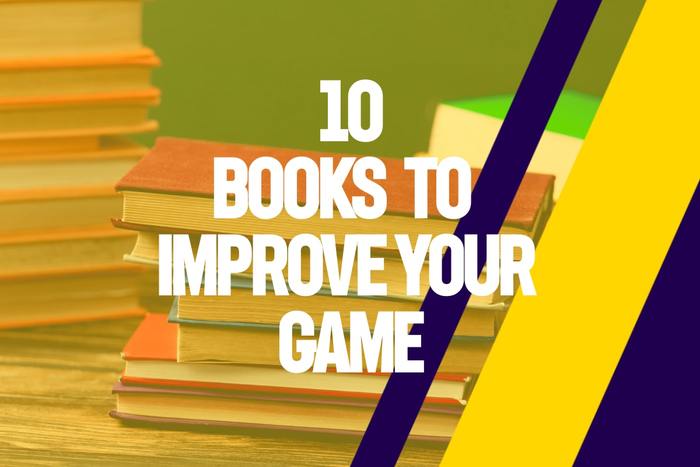 If you're a football fanatic who wants to expand your knowledge on the beautiful game, one of the best things you can do is head to a local library or bookstore and get swatting up. There are tons of amazing books out there dedicated to all sorts of soccer subjects, from in-depth tactical deep dives to complex social histories and beefy, detailed non-fiction accounts.

Reading is clearly a subjective matter; not every title will appeal to everyone. After all, in the same way that the goalkeeper and the silky winger will have a different approach to what happens on the soccer field, fans with altering perspectives on the game will be interested in different reading material.

In this article, we'll try to cover a wide range of topics, from the birth of association football to the growth of tactics in Europe in recent decades. We'll also suggest books that dive into the more passionate, emotional side of following the sport we all love. After all, that's what keeps us hooked.

#1. David Goldblatt - The Ball is Round: A Global History of Football

To start off, there's no better title than this. If it's possible to come up with a comprehensive history of how football has grown and expanded all over the world, British sports writer David Goldblatt has accomplished it with 'The Ball is Round'. Exploring the sport's universal appeal by discussing the social and cultural importance of football in every corner of the globe and shining light on some of the most fascinating fixtures of all time, Goldblatt's book is highly informative, but crucially it always keeps in mind the joy and beauty of the game. Described by some as football's definitive history, this is easily up there with the best soccer books ever written. You can grab it at most online bookstores, including Amazon and Waterstones.

#2. Simon Kuper - Football Against the Enemy

Football is a powerful force in the lives of billions of people across the globe. In this text, South African-British author Simon Kuper, who focuses on writing about sport from an anthropological perspective, examines how football shapes and is shaped by national, political, and cultural identities and conflicts around the world. Viewing the game as a medium through which passion, hope, fear, love, hatred, and everything in between is expressed, Kuper's book is based on the author's travels to 22 countries including South Africa, Italy, Russia, and the USA. He looks at how football has shaped each place he visits, and how each nation's distinctive style of play has been formed and developed over the years. It's a fascinating read that takes a genuinely original approach to the game. Check it out on Amazon.

#3. Floodlit Dreams - Football She Wrote: An Anthology of Women's Writing on the Game

Many people hadn't watched much women's football before the hugely successful Women's Euro 2022 this summer. That all changed during the most-watched women's tournament of all time. But women have been shaping and contributing to the game of soccer ever since its inception, despite near constant obstacles being placed in their way. In Floodlit Dreams' fascinating women's football anthology Football She Wrote, some of the most incredible stories of the past century of women's soccer are told, shining a light on pioneering players, coaches, and clubs.

The list of writers included in the anthology is impressive, with Gabby Logan's foreword followed by chapters from writers like Ali Rampling, Suzanne Wrack, Kehinde Adeogun, Katie Whyatt, and many more. From the story of the first women's international match after the FA's 50-year ban to the humorous tale of two black radio rookies in China, it's a seriously engaging and illuminating read. It's available in a range of places including on the website of football magazine When Saturday Comes.

#4. Ken Bensinger - Red Card: FIFA and the Fall of the Most Powerful Men in Sports

The 2022 Qatar World Cup is fast approaching, and the eyes of the world are on a country whose awarding of the world's greatest football tournament was highly controversial in the first place. It's still unclear whether Qatar have the capacity to host a World Cup, and the litany of human rights concerns and practical issues surrounding the tournament means they will be under serious pressure. But perhaps the subject that has created the most uproar is the initial awarding of the tournament to the country, a decision made by a FIFA Executive Committee who have almost all been wrapped up in a disastrous bribery scandal in the years since.

Award-winning American investigate journalist Ken Bensinger shook the world in 2018 with this shocking account of that corruption scandal in all its gory detail. A stunning read that offers genuinely fresh insight on this footballing disgrace, the book journeys to FIFA's core, exploring the stories of the FIFA kingpins whose reputations were wrecked by the bribery charges, and introducing us to the American FBI and IRS agents who managed to take them down. If you're looking to find out more about the darker side of the sport, this is one of the best soccer books around. Check it out on Amazon.

#5. Jonathan Wilson - Inverting the Pyramid: The History of Soccer Tactics

The Guardian's Jonathan Wilson is without a doubt one of the most knowledgeable and eloquent football writers there is. He's written a wide range of soccer books, from tactical explainers to geographical deep dives and most recently, an account of the lives and careers of brothers Bobby and Jack Charlton. However, there's only one title we could really include in this piece.

Inverting the Pyramid is widely seen as one of the most informative, intelligent studies into the tactical evolution of football ever written. From the formations, shapes and numbers that cemented themselves in association football's earliest formats, to modern developments such as Ralf Rangnick and Jurgen Klopp's gegenpressing systems, it's a comprehensive look at how soccer tactics have changed and evolved over the years. This one's a must-have for any tactics lovers. World of Books is one of many sites stocking this classic football book.

Author and strategist Dan Blank takes a unique perspective on the world of football with this text. If you're interested in sourcing some of the best soccer coaching books to grow your ability to train players and implement tactical setups, Soccer iQ is a great bet. It's an easy-to-read book that focuses on player experience, covering a variety of key aspects of how the game is played, from hunting rebounds, to playing in the rain, to avoiding fouls. Blank structures the book around providing simple solutions to help players solve the most common mistakes and problems they're likely to face. If you want to become a football coach, having this type of insight into the mind of the player is crucial. Take a look on Amazon for a paperback or audiobook version of this text.

#7. Michael Cox - The Mixer: The Story of Premier League Tactics, from Route One to False Nine

The Athletic's Michael Cox is one of the UK's best football tactics and data writers. This particular book takes a deep dive into how tactics have developed in the years since the creation of the Premier League in 1992. He explores the direct approach taken by Sir Alex Ferguson's highly successful teams, as well as highlighting the strengths and weaknesses of Kevin Keegan's relentlessly attacking system at Newcastle. Other Premier League legends like Jose Mourinho and Arsene Wenger are also touched on in this entertaining and informative book about the evolution of tactics in British football. It's available on sites like Amazon and World of Books.

A contributor to Football She Wrote, the women's anthology we touched on earlier, Suzanne Wrack is a highly respected and highly prolific football journalist who covers both the women's game and the men's game. This definitive history of women's football moves from the Victorian era to the present day, tracking the huge popularity of women's soccer in the early twentieth century, the banning of the sport in the UK and other nations during the following decades, and the rise of the sport in recent years. If you're interested in playing, coaching, scouting or analysing the women's game, this is a crucial read. It's available on Amazon and a load of other sites.

#9. Leo Moynihan - Thou Shall Not Pass: The Anatomy of Football's Centre-Half

The soccer center-back is a fascinating position that requires a unique set of skills, more diverse in the modern game than ever before. If you're looking to develop your knowledge of this position so that you can become the next Rio Ferdinand or Thiago Silva, a great place to start could be by reading this fascinating insight into this unique place on a soccer field. Peppered by interviews with a star-studded cast of pros and ex-pros including Virgil Van Djik, Jamie Carragher, Tony Adams, and Steff Houghton, Moynihan's text explores the arts of heading, tackling, lunging, and leadership. An enlightening look at a much-maligned position, this is the book all centre-backs have been waiting for. Head to Blackwell's, World of Books and many more sites to grab a copy.

The English football pyramid is a thing of beauty. Sport in Britain extends far beyond the bright lights of the Premier League, and acclaimed football writer Nige Tassell is dedicated to documenting the less glamorous side of the game. His book 'The Bottom Corner' is an ode to non-league football, a journey from the grassroots of the game up to the large, well-supported Conference clubs aiming to make their way into the professional league. It's a fascinating read, particularly for anyone who wants to find out more about what it's like supporting, playing or working for a club that's further down the pyramid. After all, despite most people's desires to play at the top, that's where most of us will remain. . . head to World of Books for a copy.

In need of more information about the best soccer coaching books out there? Read our guide to 10 great books about football tactics and coaching.