How to be a Groundsman 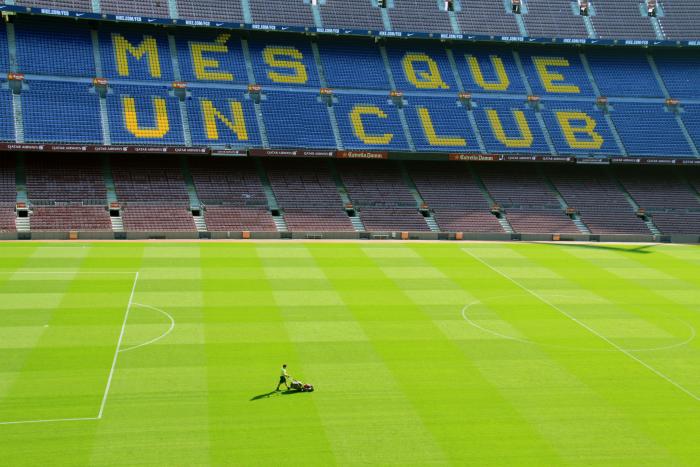 Can't pull yourself away from the pitch? Want to have a direct influence in helping your team play to their style? The role of Groundsman may be for you.

Level of game position is required:

The Groundsman is crucial at professional level but more and more smaller clubs, academies etc are employing them to maintain their surfaces.

A background in Horticulture or Turf Maintenance is very beneficial.

As the name implies, the groundsman’s role within a football club is to ensure the pitch is in as pristine a condition as possible for the games to be played on. The ground staff will also be responsible for the upkeep of any training facilities and are often also tasked with such diverse tasks as road and pavement clearing in snowy weather and ‘salting the car park’.

It will come as no surprise to learn that there is no such thing! Every day is different, whether it be dealing with the first team, development squad or one of the youth teams in a professional football club. The main focus will normally be on preparing the surface for the first team to play on and, depending on who the opponents are, the groundsman may receive special instructions such as ‘don’t cut the grass’, ‘cut the grass really short’, ‘don’t water the pitch’ or ‘water the pitch until it is almost flooded’!

On a gameday, at half time, it is not uncommon for the groundsman to be asked to put more water on the pitch but only on half of it! The ground staff have an important role to play in giving their football team even a very small advantage over their opponents!

The head groundsman at a football club will invariably work extremely long hours with the weather also playing a significant part in how his day is going to develop.

What qualifications are required:

If you have experience in horticulture, you may be able to start as an unskilled groundsperson and then progress to skilled level through gaining experience and working towards qualifications. These qualifications could include a Certificate or Diploma in Sports and Amenity Turf Maintenance, Certificate in Practical Horticulture Skills and a Certificate or Diploma in Horticulture. Degrees can also be obtained in subjects such as sports surface management, sports turf and groundsmanship.

Tell us about yourself and your role. What was your first break into the role?

I served my time as a greenkeeper and while I was there, this job just came up by chance. It was just word of mouth that there was a position at Pittodrie, it wasn’t advertised and that was twenty one years ago and I’m still here!

Describe a typical day in your job?

There’s definitely not a typical day, every day is different and I’m dealing with the first team, the Under 20’s and the youth development teams. As well as the pitch here, we look after the surrounding areas, particularly in the winter when we’re involved in salting and snow clearing. We also look after three pitches at Bridge of Don Barracks, three pitches at Balgownie and we oversee other sites that the squad sometimes use at Countesswells and Milltimber.

How did you get into this field of work? Qualifications etc?

I served my time on a golf course but also went through Elmwood College in Fife, which is part of the Scottish Rural Universities and Colleges (SRUC) complex where I was awarded a certificate in turf care. If I was to take on an apprentice these days, I would have to put him through college at Elmwood as part of a block release.

What would be your advice to someone looking for a career in this field? What characteristics are required?

Thick skin and broad shoulders! You have to be prepared to work long hours so thankfully I have an understanding wife. We had a rugby international at Pittodrie a few years ago and the undersoil heating broke down so I ended up spending the night clearing snow off the park to make sure the game went ahead. It can be a seven days a week job so if you’re not willing to put that kind of effort in, it’s probably not the job for you.

What’s the best part of your job?

Seeing the team doing well, seeing the pitch at the start of a season when it’s looking really good and the team is performing, you really feel a part of it!

How do you think this field will change/progress in the future?

The big development is in artificial surfaces which are developing now at a decent rate and there are some decent ones as well as some quite poor examples. Some don’t have the proper irrigation that’s required which, like a grass pitch, is key to allowing the ball to move fast on them. There is also as much work required to maintain a 3G surface as a traditional grass one! They are getting better and I believe eventually Desso, which is a hybrid surface, combining grass and artificial, will be fairly commonplace. Right now though the cost of maintaining them is extremely high and while all the top teams down south have them, Murrayfield is the only stadium in Scotland to have it. Whether we’ll totally move away from grass surfaces completely, I’m not sure.

I’m a huge Aberdeen fan and grew up in the 80’s so my heroes were the likes of Jim Leighton and Willie Miller who I was lucky enough to work with!