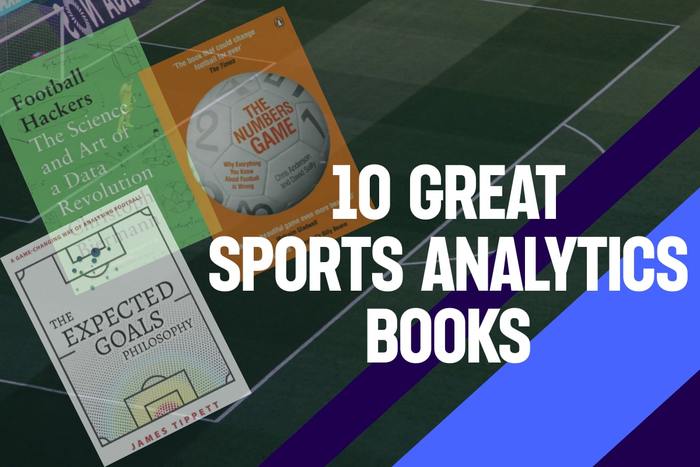 What does it mean to work in sports analytics? It's a field that has expanded rapidly in recent years, as football continues to develop and clubs look for ways to enact marginal gains in order to compete at the highest level possible. Using innovative set piece coaching, data models such as xG, or more refined match analysis can cause significant improvements in performance. In this sense, sports analytics are increasingly important within the modern game.

If you're interested in finding out more about how analytics have impacted association football, or soccer, in recent years, there are lots of books that explore this subject, and many more that touch on the role of analytics in other sports. In this article, we'll be taking you through 10 of the best sports analytics books out there, from basic explainers for beginners to more in-depth guides for those who already have strong knowledge on the subject. Let's get into it.

#1. The Numbers Game: Why Everything You Know About Soccer Is Wrong by David Sally

Published in 2013, before the extent of world soccer's data revolution had really begun to become clear, David Sally's The Numbers Game was one of the earliest books to chart the new types of innovation being introduced within the game and prompt us to watch football in a different way. His text is billed as "Moneyball meets Freakonomics… a myth-busting guide to understanding—and winning—the most popular sport on the planet". Quite the claim, but one that's certainly substantiated by 400 pages that dive deep into how numbers are impacting football in the modern era. An author with a background in behavioral analysis, David Sally takes an unconventional approach to analysing sport, aided by Chris Anderson, a former pro goalkeeper turned statistics guru. The book unpacks the numbers behind predicting winners and losers, investigating the value of different in-match situations from corners to free-kicks, and busting a variety of myths that exist within the game. The result is one of the most influential sports analytics books of the past decade.

#2. How to Watch Football: 52 Rules for Understanding the Beautiful Game, On and Off the Pitch by Tifo - The Athletic

From a text produced almost a decade ago to one that's only been on sale for a matter of weeks… In recent years, The Athletic's Tifo Football Podcast and Tifo YouTube channel has played a huge role in introducing new audiences to the tactical strategies and themes that dominate the modern game. From the gegenpress, to zonal marking, tiki-taka to the low defensive block, Tifo's vibrantly-animanted videos have provided an accessible way of looking at football tactics for many fans. And now, they've expanded into the literary world, publishing a text that promises to revolutionise the viewing experience of the casual football supporter. How to Watch Football is all about switching up the way you experience a match, becoming more observant, noticing details, and generally watching in a more analytical, tactically-focused way. There are aspects of their agenda that may seem confusing at first, but some of the ideas will be easy to pick up, and the results profound.

#3. The Expected Goals Philosophy: A Game-Changing Way of Analysing Football by James Tippett

Last year, our article on 10 great books about football coaching and tactics shone a light on some of the best things that have been published about coaching and tactical strategy in soccer. One of the first books we put on that list was James Tippett's influential 2019 release The Expected Goals Philosophy. The book helped accelerate the increased presence of the Expected Goals (xG) metric within football. xG can be seen on Match of the Day stats displays, and it's regularly discussed by expert pundits and podcasters on various different formats. A statistical framework that helps analyse the quality of different chances within a match, xG is the bedrock of modern soccer analytics, and anyone who wants to increase their knowledge in this area needs to have a decent understanding of the metric (our explainer article on Expected Goals can help with this). In this book, Tippett explores theories used in talent identification and gambling, ultimately arguing that xG is vital when it comes to analysing modern football.

#4. Moneyball: The Art of Winning an Unfair Game by Michael Lewis

If your interests remain strictly centred on association football, don't get impatient here — when it comes to sports analytics, it can be extremely useful to widen your gaze and take in the work that's been completed across other sports. Coaches and big thinkers within US sports such as baseball, basketball, and American Football have been some of the most passionate advocates of data and analytics within sport. And probably the biggest story to have ever emerged from the world of sports data is Moneyball: The Art of Winning an Unfair Game. Adapted into a major 2011 Hollywood movie starring Brad Pitt, Michael Lewis' book, published in 2003, charts the rise of Oakland Athletics baseball team, a journey which relied heavily on an innovative use of data. At Oakland, General Manager Billy Beane rejected industry expectations and proposed that the collective wisdom of baseball insiders was outdated and not backed up by data and statistics. Instead, he implemented an analytical, evidence-based approach to assembling a competitive baseball team that negated the team's small budget and allowed them to achieve huge success. A testament to the power of analytics within elite level sport, Moneyball is one of the most famous sports analytics books there is. You can get it on various sites including World of Books.

#5. Mathletics: How Gamblers, Managers, and Sports Enthusiasts Use Mathematics in Baseball, Basketball, and Football by Wayne L. Winston

Wayne L. Winston is a man with serious academic clout. In Mathletics, he strays into the world of sport to explain how mathematics is used to boost the chances of success within some of the most popular US sports. An entertaining but practically-minded book that explores how maths can be used to analyse a range of different statistical and probability-related questions within baseball, basketball, and American Football, it's a fascinating dive into the real-life importance of sports analytics. While European football purists may be more inclined to devour a book that's less focused on US sport, this angle does however provide a fountain of knowledge on the roots of sports analytics. Winston asks interesting questions such as "Does money buy performance in professional sports?" and "Could professional basketball have used statistics to avoid crooked refereeing scandals?" and ultimately argues that mathematical tools can be an excellent resource for top coaches and managers when it comes to evaluating players and enhancing performances.

After some welcome straying down other sporting paths, let's hone back in on the sport that we're most focused on across the Jobs in Football Blog. Ryan O'Hanlon's Net Gains steps beyond the basic explainers offered by some of the other more introductory books in this guide, to give readers an in-depth examination of the rise of analytics in soccer. In the text, O'Hanlon tours the world in search of innovative approaches to soccer that bust open the sport's conservative attitudes to push things forward. He explores how the increased acceptance of analytics in football in recent years has allowed coaches, players, and fans to build their knowledge of the game in a way that may not have seemed possible a generation ago.

A classic sports analytics book in every sense of the word, Simon Kuper and Stefan Syzmanski's Soccernomics is a text that since its publication in 2009 has provided numerous analytics enthusiasts with their gateway into the field. The book uses insight from economics, statistics, psychology, and business (which at the time, was a highly unconventional route to take), in order to bust some myths and reveal some counter-intuitive truths about the game of soccer. The book's mission is to answer age-old questions like "Why do England lose?" "Why doesn't America dominate the sport internationally?" and "Why have the German national team been so successful?" Focusing on subjects and areas of debate that will be well-known to any football lover, Kuper and Syzmanski's book takes a new approach to answering these conundrums, and one that can prove highly engaging for those who are only just getting started in the world of sports analytics and data. Plus, a new 2022 World Cup Edition was recently published, which you can check out at Waterstones.

#8. Scorecasting: The Hidden Influences Behind How Sports Are Played and Games Are Won by Tobias J. Moskowitz and L. Jon Wertheim

A highly rated text within sports analytics circles, Scorecasting sees behavioral economist Tobias Mosowitz join forces with well-respected Sports Illustrated writer L. Jon Wertheim to dive into some of the most deeply-held beliefs within football and show readers where long-established truisms are wrong. You may have noticed a theme here — many of the texts on this list are built around myth-debunking, a phenomenon that essentially reflects how new the role of data and analytics in football is. While some US sports have relied heavily on data for many years, association football is still relatively new to high-level analyltics, hence the strong interest of writers in getting rid of all the false assumptions football fans have been drinking in for years.

#9. Football Hackers: The Science and Art of a Data Revolution by Christoph Biermann

According to Biermann, "The future of football is now". The game has expanded and developed rapidly in recent years, the sport's data revolution gaining serious momentum as the power of advanced metrics and detailed analysis is shown by the rise of innovative Premier League clubs such as Brighton and Brentford, who use the power of data to outfox opponents with much higher budgets. Christoph Biermann's 2019 book Football Hackers is all about charting this revolution and exploring how things are likely to develop in the coming years, by talking to scientists, coaches, managers, scouts and psychologists at some of the world's biggest clubs to find out what's happening to push the beautiful game forwards.

#10. Outside the Box: A Statistical Journey through the History of Football by Duncan Alexander

Our final entry is written by a big name within the world of football statistics: co-founder of OptaJoe and Co-Editor-in-Chief of The Analyst, Duncan Alexander. Outside the Box is another of his contributions to the world of football analytics, published in 2017 via Cornerstone. A journey through the history of football that focuses its sights on statistics, Outside the Box utilises the OptaJoe archives to trace the evolution of stats in football and observe how the Premier League and other elite soccer competitions have been changed by the rise of analytics. An accessible and highly informative account of a history that keeps being written, it's a must-read for anyone wanting to get their hands on a top sports analytics book.

We've got lots more articles covering the rise of analytics and data in football. Why not start off by checking out our 7 easy steps to get started in football data and analytics?