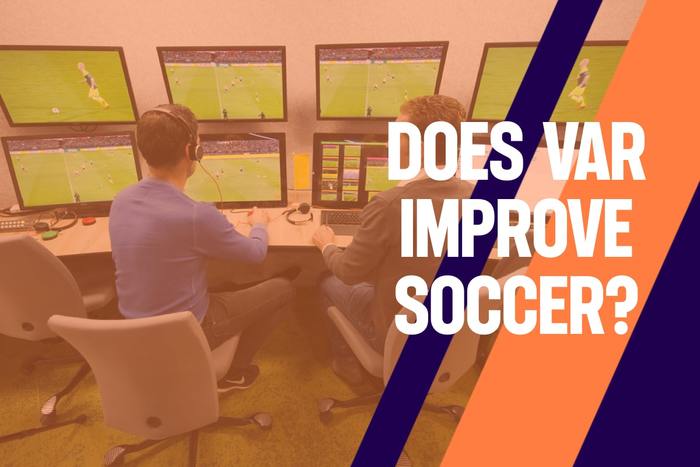 Soccer is a sport that is constantly being tweaked and developed. From the creation of the offside rule as part of the English Football Association's 1863 Laws of the Game to the introduction of the back-pass rule in the 1990s to clamp down on unsporting play, changes and adaptations are part and parcel of the game. The modern era is no exception; from the rise of goal line technology to the altered goal kick rules that allow defenders to step inside their own penalty area, we're arguably experiencing one of the biggest periods of evolution soccer has ever seen. 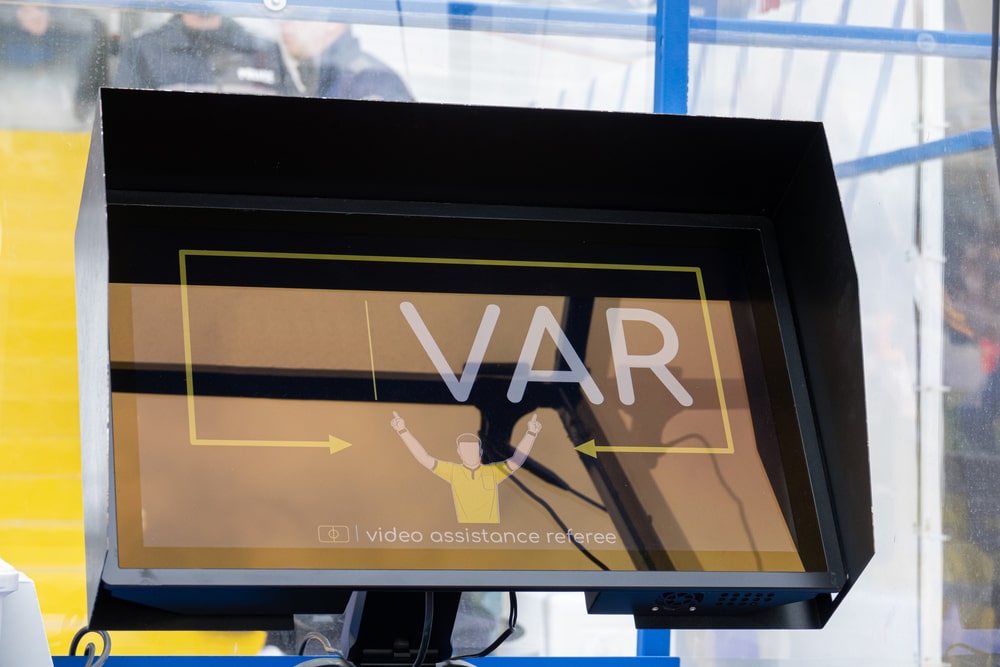 A key aspect of the recent changes witnessed in association football is the increased role of VAR. Anyone who's watched elite soccer competitions in the last few years is likely to have heard this term being thrown around — but what does it mean? In this article, we'll be explaining what VAR is, answering the question "how does VAR work?" and crucially, exploring whether this is something that improves the game. Let's begin with a simple VAR soccer definition...

What is VAR in soccer?

So how does VAR work? Essentially, VAR involves expanding on the typical set of game officials to include a team of video assistant referees whose job it is to watch a dedicated match on video screens in real time, with access to various different replays and angles, in order to provide an additional perspective on gameplay. By using this form of video review, they are able to advise the referee to overturn a decision if they feel they have made a clear and obvious error. They can assist the referee in making a final decision on key match moments, including yellow and red cards, penalty kicks, and examples of misconduct.

We'll spend a bit more time discussing the controversies of VAR later on, but before that, it's worth fleshing out exactly what this technology can be used for.

What does VAR check?

Intended to give officials the opportunity to overturn their initial decisions when it becomes clear that they have made a "clear and obvious error", VAR was introduced in the Premier League after a unanimous vote from the division's clubs, which made England's top flight the last of Europe's "Big Five" to adopt VAR. Its implementation can vary between leagues — don't expect VAR in Major League Soccer to be exactly the same as VAR in Serie A, for example — but generally, officials use VAR to review four main types of decision: goals and the violations that precede them (for instance offsides), red cards, penalties, and mistaken identity when awarding a card. It's these areas of decision-making that form the basis of what VAR is used for.

A VAR team is usually made up of a head referee and two other assistant video referees. In most cases, this VAR team is not located within the ground itself. Instead, they'll be at a dedicated location, monitoring play using a video replay system. In the Premier League, for example, this team is situated at Stockley Park, a business estate in Hayes, West London. This VAR Hub has the power to intervene and advise the overturning of decisions made by the on-field referee, when it comes to incidents concerning red cards, goals, penalties, and cases of mistaken identity. 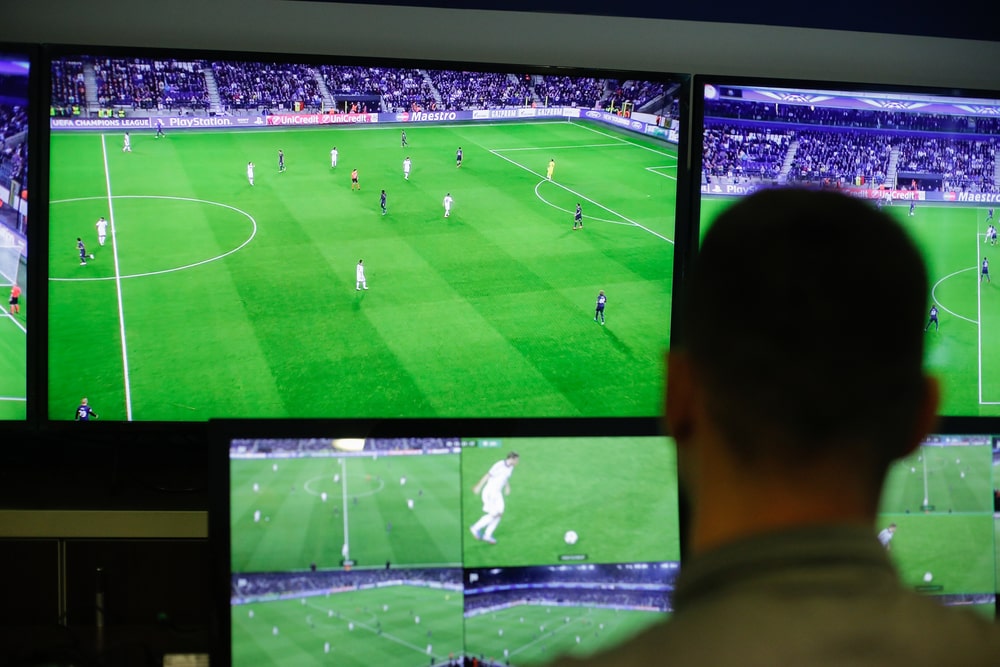 This is a big question. Since its introduction at the beginning of the 2019-20 season, Video Assistant Refereeing has been a source of great controversy in the English Premier League. It's been less of a shock to the system in other leagues and competitions where its implementation has been more successful; for example, the FIFA World Cup has tended to use Video Assistant Refereeing effectively, with minimal disruption. But wherever it appears, VAR causes serious debate. In order to answer the question "Does VAR improve soccer?", we're going to split this section into two halves: firstly, we'll take a look at the benefits of VAR, before moving on to the downsides and criticisms it has faced.

The benefits of VAR

VAR has been viewed as a broad success by many people within the world of soccer.  To keep our focus on the UK, according to the Premier League website, the introduction of VAR in 2019/20 increased the percentage of correct key match decisions from 82% the previous season to 94%. In its first season, VAR checked 2,400 incidents and overturned 109 decisions, averaging an overturned decision every 3.5 matches. This greater accuracy is, it's argued, exactly what video assistant refereeing was brought in for.

The most straightforward benefit of VAR in soccer is that it offers officials a chance to review decisions within a video operation room and ensure that the correct call has been reached. Many people would argue that regardless of how long it takes to reach this decision, getting things right is ultimately the most important thing And in most leagues, it seems as though the use of VAR has increased the amount of decisions that are being called correctly.

Another key benefit of video assistant refereeing is that it maintains player discipline by stopping players from getting away with acts of violent misconduct or aggression on the soccer field. In theory, rule-breaking should always be punished when the option of a VAR review is there, so clamping down on these kinds of fouls is made easier by the advent of video assistant refereeing.

For those who love nothing more than a bit of chaos and tension during a soccer match, VAR can also be a source of high drama. We've now all got used (at least a little) to those suspenseful moments we spend waiting on a decision to come through from the referee review area, where we're hanging on every word displayed on that huge projector screen in the corner of the ground.... it can be infuriating, and many would argue that the game is worse off for it, but the drama and excitement provided by this new addition to the footballing spectacle is a positive point for fans of the VAR soccer phenomenon.

The downsides of VAR

The last point made in the previous section is, for a lot of people, the biggest downside with VAR. At its core, video assistant refereeing disrupts the natural ebb and flow of a soccer match by interrupting games with delays and stoppages (some of which can be extremely lengthy) as officials go over and over decisions to ensure the correct call is made. This can be agonizing and boring in equal measure, and it can suck the joy out of a goal celebration or a moment of incredible drama on a soccer field. Some fans will argue that these kinds of situations are what makes football great, and the fact that VAR can reduce their power means it is not something that should be embraced within the sport.

Another weakness of VAR is the inherently subjective nature of association football as a sport. The fact of the matter is that different people, when presented with the same angles and evidence, will often have opposing views on the exact same situation. A strong challenge for one person might be a terrible foul for another, while an attacker's knee being offside may seem an advantage to one pundit, but for another commentator, its impact is negligible. This is arguably the biggest issue with VAR - it attempts to bring a level of objectivity into a sport that on many occasions is subjective, ie. down to the individual. Having video assistant referees might increase the likelihood of a decision being reached that most people think is fair, but it certainly doesn't guarantee it. For opponents of VAR, the benefits brought by VAR simply don't outweigh the negative aspects of this new sporting technology.

What is being done to improve VAR?

Given how recently video assistant referees came into world soccer, it's unsurprising that league officials are constantly reviewing and trying to improve the way that this technology is used in matches. In the Premier League, steps in the right direction have been taken; all key match decisions are reviewed by a newly-formed independent panel each week. This season, highly esteemed former referee Howard Webb returned to the Professional Game Match Officials Limited (PGMOL) as Chief Refereeing Officer, and one key policy he's implemented is a commitment to allowing games to flow and only intervening with VAR when strictly necessary. Again, this certainly seems like a step in the right direction.

That being said, the biggest critics of VAR are unlikely to be satisfied by tweaks like this. Many people are extremely frustrated by the way that this addition to the game of soccer has caused unnecessary disruption and delay within top-level matches. Some argue that ultimately, getting a few extra decisions correct isn't worth the problems caused by stopping matches and preventing fans from celebrated passionately without being troubled by the thought that their team's last-minute, match-winning goal is about to get chalked off.

There are certainly benefits to VAR, but in order to convince the nay-sayers, this footballing phenomenon has got a long way to go yet. When it comes to the question, 'Does VAR improve soccer?', the jury is most certainly still out. It's still early days, so we'll see how things develop in the coming years.

If you've enjoyed this dive into the world of officiating, we're confident that there is plenty more content on the Jobs in Football blog for you. For some basics on how the laws of the game are implemented, head over to our article on Game Officials: the key people needed to officiate a soccer game. Or if you're after a more advanced piece of writing relating to the key features of the modern game, check out our guide to Expected Goals (xG), a metric that has become a big part of how elite soccer is analyzed these days.