The Future of Football 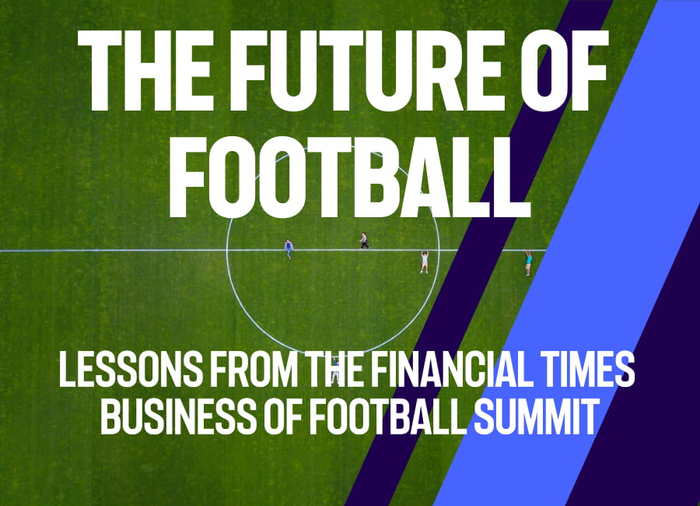 On 17 and 18 February 2021, the Financial Times organized their annual FT Business of Football Summit with more than 30 stakeholders across the world sharing their thoughts about the challenges and opportunities over the next 10 years. Covid disrupted business and livelihoods everywhere including the football industry. Due to the pressure on all parts of the football ecosystem opinions were contrasting and varied and not surprisingly critical and to a certain degree self-serving. Here are some of the key points that caught my attention.

Whilst there is no disagreement on the length of a football match, there is plenty of disagreement about the balance of matchdays between domestic and international formats. According to Richard Masters, CEO of the English Premier League (EPL), there is no appetite to reduce the number of teams or match days. Broadcast revenues have driven unprecedented growth of the EPL and outweigh any value of expanding European competitions such as the Champions League or Europa League to the detriment of domestic formats.

Across the Channel, views in France are slightly different. According to Loïc Fery, President of FC Lorient, 17 out of 20 clubs in Ligue 1 post a loss before player transfers. FC Lorient was one of the exceptions posting positive figures in 10 of the last 12 seasons. Fery was supported by CEO of Olympique de Marseille Jacque Henri Eyraud claiming a league with 20 clubs was simply too much for the French market.

Debate and discussion about the ‘Swiss Model’ and the ‘European Super League’ formats are likely to continue for several years. Post 2024 some stakeholders are seeking a 10-year agreement to create more stability across the industry as opposed to three or four year cycles that have featured in recent years. Others prefer 5 to 7 years.....take your pick.

Despite the Covid pandemic there is still plenty of liquidity in the market, including organisations such as SoftBank who were part of a consortium in 2018 discussing an injection of $25 billion into FIFA organized international tournaments. Today, CEO Marcelo Clure talks about investing in disruptors across all industries, as well as football. SoftBank currently has stakes in Girona FC, manages Club Bolivar and is a partner of Inter Miami FC with a 50% stake. To add intrigue to investment, Club Bolivar is also part of the City Football Group and is working closely in the development of an academy to increase future football talent exports from Bolivia.

Finance and investment models in European football have been fairly simple in recent years. There have been loans collateralized by assets, TV rights pre-financed on a yearly basis, buying and selling of players, and new stadia to securitize figure revenue such as ticketing. Amongst all of these models, perhaps the most important question is ‘who is the actual consumer and what are they expecting from football in the future?’ Clearly the current models work fine as long as they are not disrupted but one thing is clear is that the future generation of customers under 25 years have a different attitude to consuming and engaging with sport. Fans not only want to watch but be actively involved. According to Peter Hutton, Director of Sports Partnerships at Facebook, people stay 55% longer if they are actively engaged with the sport they follow. With 700 million sports fans on Facebook and 400 million on Instagram, there is plenty of competition for our time and attention.

Broadcast rights fees increased from €3.5 billion to €7.6 billion over 5 years from 2013 to 2018 for the big five football leagues in Europe according to Claire Enders of Enders Analysis. But the last double digit growth year was 2015/16 and now deflation in rights fees is 15%, partly due to Covid. Club revenue is also down 20-25%. With a business model that largely grew on the back of broadcast rights in combination with matchday and commercial revenues, clubs have always invested on the basis these revenues would not decline. The loss of matchday revenues and compensation to some broadcasters (due to Covid) has placed enormous pressure on owners to close the deficit or cut costs.

Not everyone is happy about rampant media and commercialization of European football. The CEO of the German football federation, Christian Seifert attributed the spiraling costs of European football to “poorly managed cash burning machines” in La Liga. Adding that despite the tremendous growth over this period the top clubs were not able to develop sustainable business models. According to some media reports FC Barcelona is now weighed down with debts of $1 billion aside from the challenges the team faces on the pitch.

Sometimes seen as a more radical entrepreneur, Andrea Radrizzani, Chairman of Leeds United and founder of the investment platform Aser Ventures was critical of the current model. Radrizzani suggested Pay TV models charging $40 to $50 per month need to be replaced with pay-per-view matches priced between $3 and $5 to attract the younger generations and democratize the distribution of content. He is not alone as Simon Green, Head of BT Sport and Andrew Georgiou, President of Eurosport both agreed D2C models offered a new opportunity to engage with new customers. According to Georgiou, latest research indicates that 42% of 13- to 23-year-olds are not interested in sport. The competition is less between football clubs but more with Netflix, Facebook, online gaming and YouTube. The solution is not in the hands of one group as broadcasters, telco’s, leagues and clubs all need to agree on a sustainable and equitable model.

In the US, franchise owners such as Clark Hunt, CEO of FC Dallas and Jason Levien, CEO of DC United see sports franchises as unique, durable and capable of delivering strong financial returns. Of course, without promotion and relegation you could say the risks are reduced. With MLS franchises now selling for $325 million, investors are looking for growth of 10-14% a year based on forward revenue guarantees of 60-70%. One major difference between US and European professional sports is ‘league oversight’ and the ability to arrange credit deals which saved the US leagues from pressures faced by leagues and clubs in Europe. For those who are skeptical, 30 MLS franchises have invested a collective $1.5 billion in stadia in recent years with another $2 billion planned and $0.5 billion earmarked for training facilities. With World Cup 2026 on the horizon, the US market should be in a strong position to sustain growth that never materialized after World Cup 1994.

Talent is often seen as the growth engine for sport and football in particular. Who and where will the next Messi or Ronaldo be discovered? The Benfica Academy has been highlighted as one of the most successful academies in Europe alongside FC Barcelona and AFC Ajax in Amsterdam. With an investment of €10 to €12 million per year, Benfica is offering 200 kids the opportunity to chase their dreams. With only 10 of the 200 kids progressing to the biggest clubs in Europe this feels like a relatively low return on investment.

Another part of the game gaining deserved recognition is women’s football. With a different emphasis including lifestyle, education and role models the game is attracting more interest and investment but not nearly enough according to Rebecca Smith, former international and now Executive Director of COPA90. The American league, WNSL has entered broadcast deals with platforms such as Twitch as well as CBS. There is a danger according to some experts that following the business model of the men’s game the full potential for the women’s game will not be achieved. Not chasing the Pay TV deals but offering free-to-air with micro-transactions is a more sustainable model that offers more control. Retaining governance of the game with regards to league attendance, digital platforms, merchandise, sponsors and players are key to the success. Focus on diversity and avoid boring content is needed to attract and retain the interest of the under 25’s according to Smith.

Cutting through all of these topics is one that is easily forgotten. Governance and ensuring the integrity and trust of those who are part of this industry are free to speak and protected by the law. Racism in football has reached shocking levels, especially against black players. Whilst social media has driven interest in players, clubs and matches it has also provided a platform for discrimination and inequality.

Instagram has 35,000 content moderators to eliminate those who use the platform to abuse others. Twitter numbers are not available but according to Sanjay Bhandari, Chairman of Kick it Out, there is a long way to go. This point was brought sharply into focus by Vinai Venkatesham, CEO of Arsenal FC who said “how do you explain to a black football player that if a piece pirated of content goes up, it gets taken down within minutes but that’s not the same for racist abuse. I don’t know how you explain that”. Enough said.

If there is one thread that will underpin the future success of football, it is community fan engagement. Paul Barber, CEO and Deputy Chairman of Brighton and Hove Albion FC reflected that “fans are more critical than we thought”. He was not just referring to the revenue from ticketing, merchandise and hospitality but the wider contribution fans make in terms of atmosphere, visuals, pre-match build and the human side of the beautiful game. Although Barber will channel future investments into women’s football, a new player training and recovery facility he also cited partnering with the local community as a key priority. With cheap flights, Airbnb and Uber we often forget that our most valuable fans are on the doorstep.

Getting fans safely back into stadia is a high priority for most clubs and leagues. Technology will play a role in helping bring the safe return of fans but can further enhance the fan experience. Christian Lau, CTO of Los Angeles FC refers to ‘eliminating friction’ throughout the fan experience through use of digital tickets, NFC, mobile first, retail check-out using RFID and intelligent sensors to manage inventory and volumes of crowds in venues. Connectivity is an important part of the experience for Gen Y/Z fans where in game betting and streaming video on demand video with a different interpretation of entertainment is required.  Being platform agnostic and offering diverse content anytime and anywhere will be the key to success for this market segment. Whatever the format, a fan is part of a community who wants to enjoy the experience together with friends.

The future is bright, and the ball is round

The FT Business of Football Summit confirmed one thing. There are more differences than similarities that bring the guardians and decision makers of the football industry together. Healthy competition on the pitch is not always aided by unhealthy competition off it. With the current business model of European football creaking under the impact of Covid, decisions and strategies in the next two or three years will define the health of the sport for the next 10 to 20 years.

A shift will take place with new players and new investment entering the market. Partnership and knowledge sharing will be key words. As Andrea Radrizzani disclosed the partnership between Leeds United and the San Francisco 49’ers increase the valuation of Leeds to £300 million. More importantly it brought valuable expertise in stadium management, merchandise and ecommerce amongst others.

Whilst the beautiful game will continue to entertain and exasperate in equal measure, time is running out to resolve some of these issues at the heart of the game. As Delia Smith, Joint Majority Shareholder of Norwich City FC said, “we see our role as caretakers of the club and caretakers have to take care”. Sentimental perhaps but if everyone shares these sentiments, the game will have a bright future.

Richard is the Academic Director and Professor of Marketing at the Johan Cruyff Institute, and now offers Career advice to anyone looking to develop and progress within the industry.