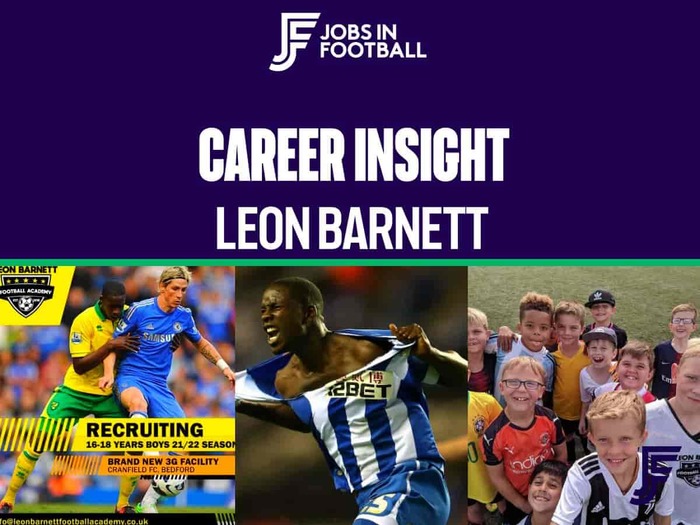 Leon Barnett is a former professional football player, who unfortunately was forced to retire at the age of 32 due to a heart condition. Following a successful career in the game and playing in all four tiers of English football, Leon now runs the Leon Barnett Football Academy, as well as regularly co-commentating at EFL fixtures.

In this interview, he shares details of his memorable playing career with Sascha and also explains how he has adapted to new football roles since his retirement from the game.

Did you always intend to stay within the football industry once you retired?

I did want to stay in football but some of the roles within football clubs are not that stable so I thought it would be a good idea to open my own academy. I have played in all four tiers of English football and I wanted to use my experience and knowledge to help kids develop. 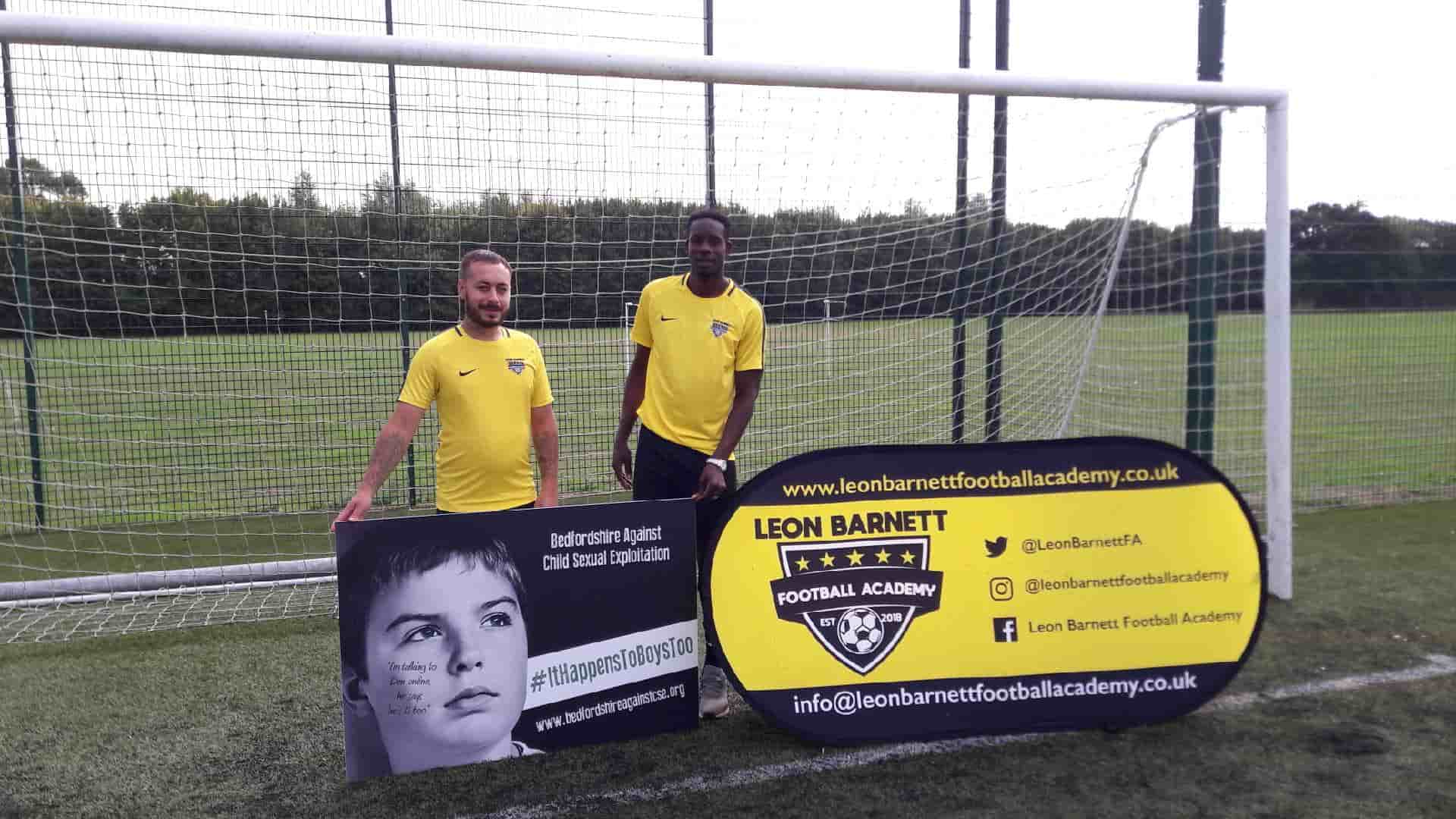 What made you decide that opening the Leon Barnett Football Academy was the area to pursue?

When I was younger, I used to play a lot of football with my friends but nowadays there are a lot of academies around and a lot of them have holiday camps too. I wanted my academy to be a bit different from that format. I think what we do in having a professional player come in and train with you, is really good; there aren’t a lot of camps that have professional players involved like that. I didn’t have that opportunity when I was a child so I thought it would be a great idea to help out in that way.

It’s not just about the football either. You hear about the high levels of mental health issues amongst boys and I think that if I can give them the opportunity to express their feelings through football, then that’s fantastic. Even if I can’t help them with their football, hopefully I can help them build their confidence one way or another.

What is the most difficult part of your current role?

I honestly don’t think there is a difficult part. You get the odd kid that does something silly but children are children! Any little issues that I have come across haven’t really been too difficult to manage. Maybe I’ve just been lucky so far!

Socialising, definitely. When I finished playing professional football, I didn’t know what I was going to do or what avenue to pursue but once I opened the Academy and started speaking to people and being around good energy, it was great.

I love playing football and other sports with children – having a bit of competition with them and a bit of a laugh too. The holiday camps are quite fun as well as I can give them as much sugar and sweets as I want and then let their parents deal with them once they get home – it’s all fun and games! 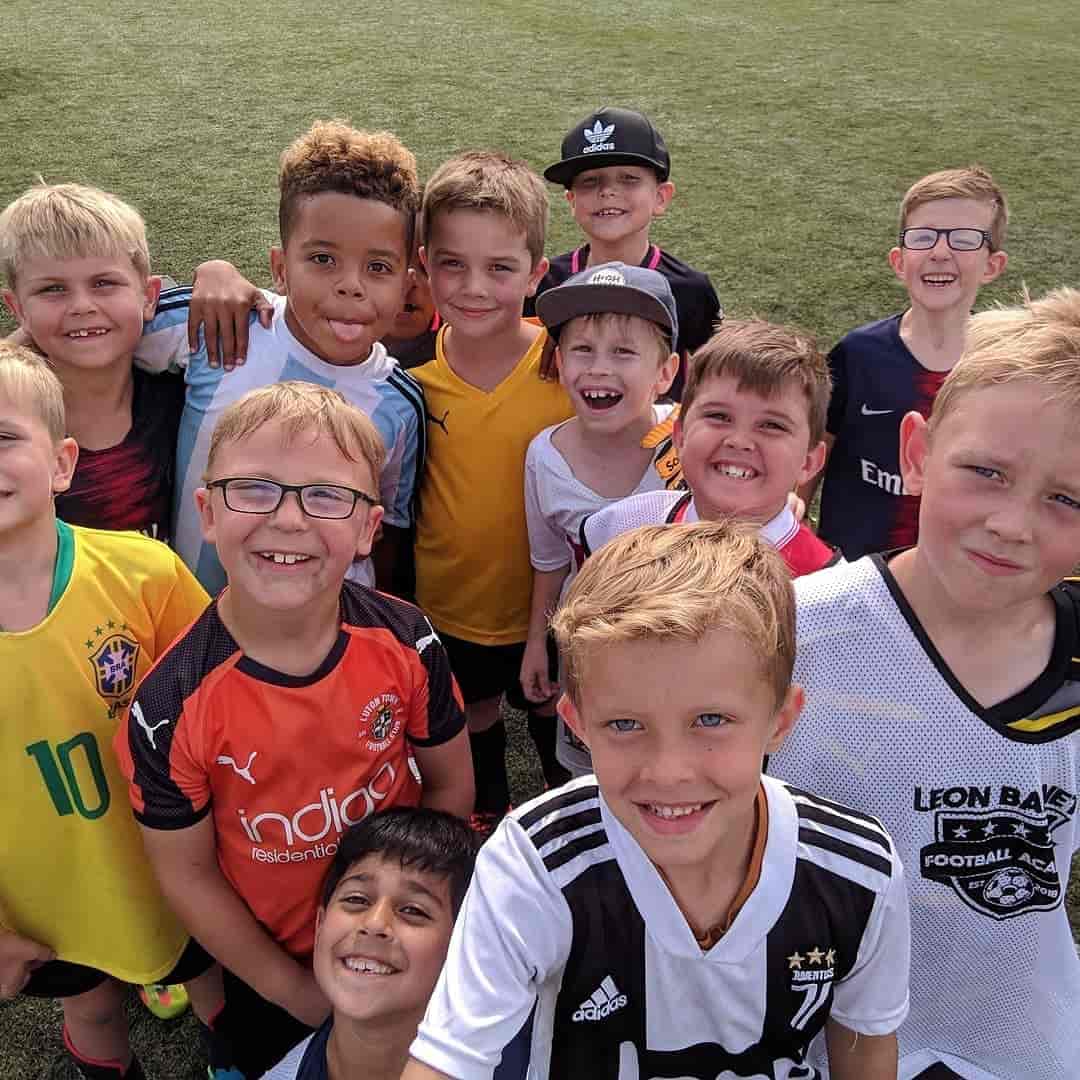 You have also been involved in co-commentary. What has that experience been like?

I enjoy taking part in the commentary and would love to do more of it. (Leon commentated on the Luton vs Norwich fixture the day before his interview – a special moment for him having played for both clubs).

Northampton Town were the first club to ask me to commentate – I was still playing for them but I was injured at the time. I didn’t really want to do it at first because I wasn’t sure I would have much to talk about but I absolutely loved it. It snowballed from there and other clubs have since asked me to commentate at their fixtures.

I would love to do it on a full-time basis and during this lockdown period, I have been able to do it more often, which is nice.

I’ll just keep doing what I’m doing whilst I am enjoying it – you never know where it may go. 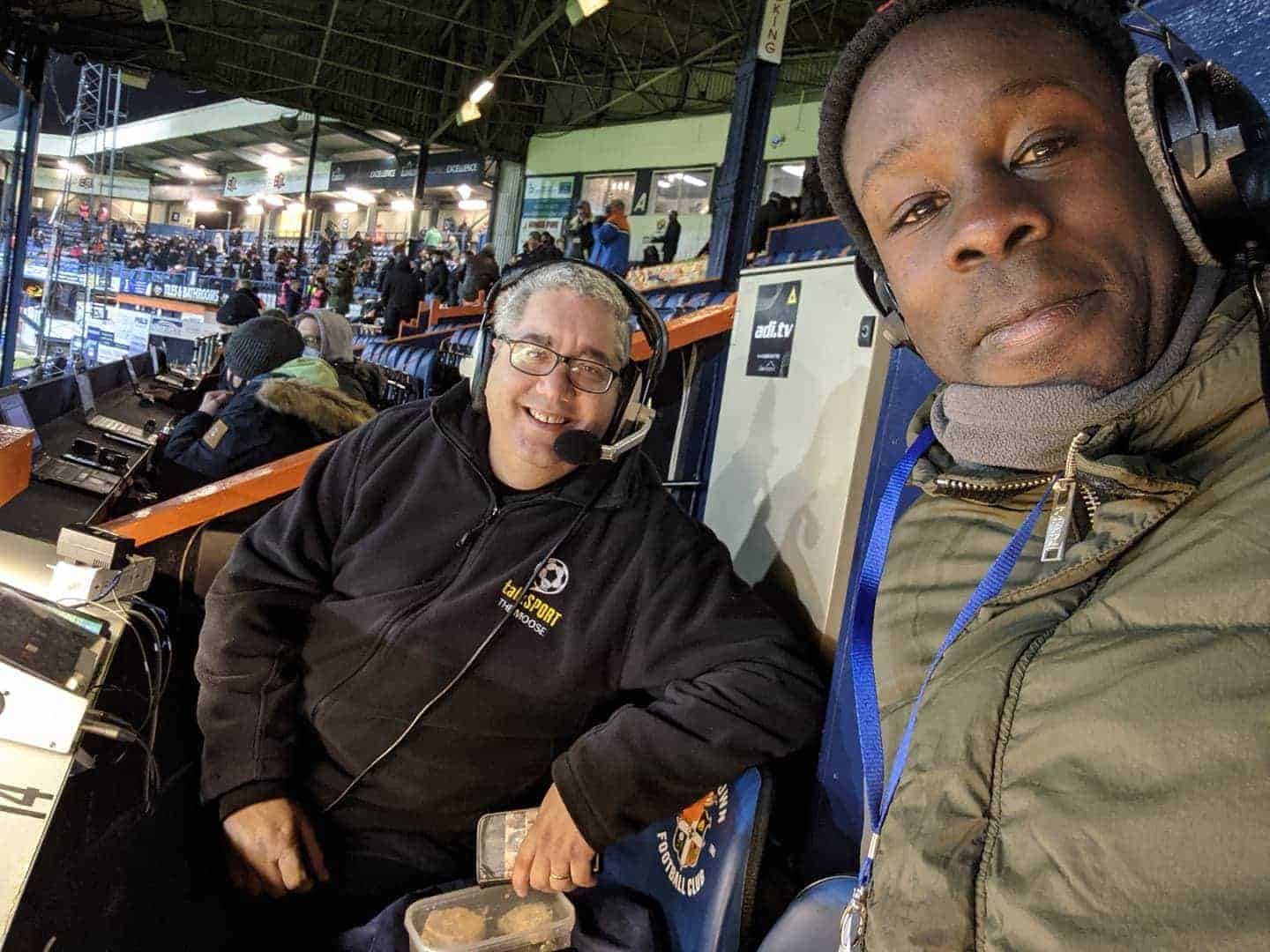 What challenges have you had to overcome to be successful in your role?

Firstly, those challenges you had to overcome to be a professional footballer:

As a professional sportsperson, there are certain things you have to give up. From a young age, I had school friends that weren’t necessarily getting into trouble but they were ‘characters’. When I signed for Luton, the club would check on how I was doing at school so I had to make sure I was doing what I needed to do for them. Then, when I left school at 16, I had to be dedicated and give up more, such as fast food and nights out. But if you want that dream of playing at a high level then they are small sacrifices you have to make really. 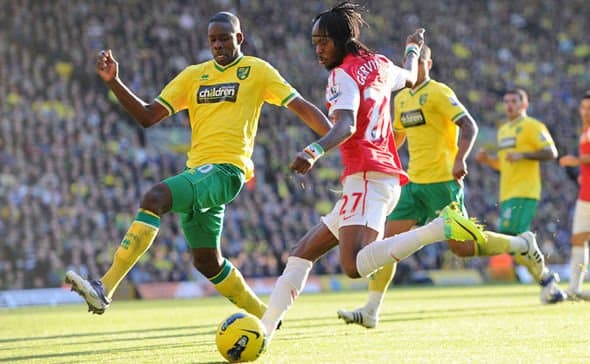 After football, well, I didn’t expect to retire at 32 (Leon was forced to retire after a diagnosis of a heart condition) – my plan was to play until I was 35. However, I had a good financial advisor who encouraged me to make ‘baby steps’ about my life after football and so I started planning at the age of 30. In hindsight, I planned at the right time because if I hadn’t done so and then reached early retirement at 32, it would have been a bigger struggle.

It was difficult because it wasn’t on my terms. I thought early retirement would have come from a knee or ankle injury, or even because the offers to play weren’t there. But this situation, I couldn’t do anything about it and it was hard to deal with. At the time, I thought I was just going to go through a few medical tests and be back in training within a couple of weeks, or even a couple of days. But then I was off for 2 to 3 months and they wouldn’t let me train for safety reasons. I had all these meetings with doctors and cardiologists about how long it would be until I could play football…

I believe it was early-mid November, 2018 that three cardiologists made the decision and said to me ‘Look Leon, you may not be able to play again.’ Two of the three cardiologists advised me not to play and suddenly it hit home. I was okay when I had to tell my teammates at Northampton Town but when I got home and had a text message congratulating me on the career I’d had, I felt like my childhood dream was over.

Luckily, I have always had positive people around me and I am in a good place with everything I am doing at the moment too

Are there any resources you would suggest as recommended reading?

I can only really answer this from a playing perspective.

I used to read a lot of autobiographies to get an insight into the game. I liked Ian Wright’s autobiography and Rio Ferdinand’s is a touching story too. Outside of that, I can’t think of a specific book that I would recommend but I would say that while a lot of work takes place on the pitch, you also have to have the right attitude.

I was fortunate that I had the right people around me to give me the stepping stones I needed so I think having that, plus attitude and discipline goes a long way, not just in football but in life.

What advice would you give to those who hope to work in the football industry and to those players who are considering their options after retirement?

The PFA do a lot for players who are both in and out of football – they put on a lot of courses. I think they work well with players whilst they are still playing and they do their best to help you ‘steady the ship’ once you have retired. I know there has been some doubt in the media about the PFA support for players but from my personal experience, they have been really good.

I think some of the young players nowadays believe their career isn’t going to end but nobody plays football forever so you need to be prepared.

Also, from past experience, what I would say to anyone reading this is just live your life to the full – don’t take things for granted. I got to play football to a high standard and enjoy it but I never knew when my last day was going to be so I would say, just live every moment that you can. Playing football for me felt like the best job in the world and now with running my own academy, I get to coach and keep enjoying the game. When I coach the kids, I try to be as positive as I can and I feel I get more back from them when I am like that. Performance levels go up when I am positive towards them.

Lastly, I have always been a person to set targets so I would say that if you have a dream you want to achieve, then set targets for it.

I would have loved to have kept playing but unfortunately, that particular dream has finished for me. So now I just want to run my academy and do my best there. We have an Education Football Academy for 16-18-year old’s in Cranfield, who play football full-time and study as well. That means they are enjoying their football but gaining an education too. It is important to have that education and my 100% focus will be on that academy next year - I want to coach them as much as I can and let them find that balance between football and studying. 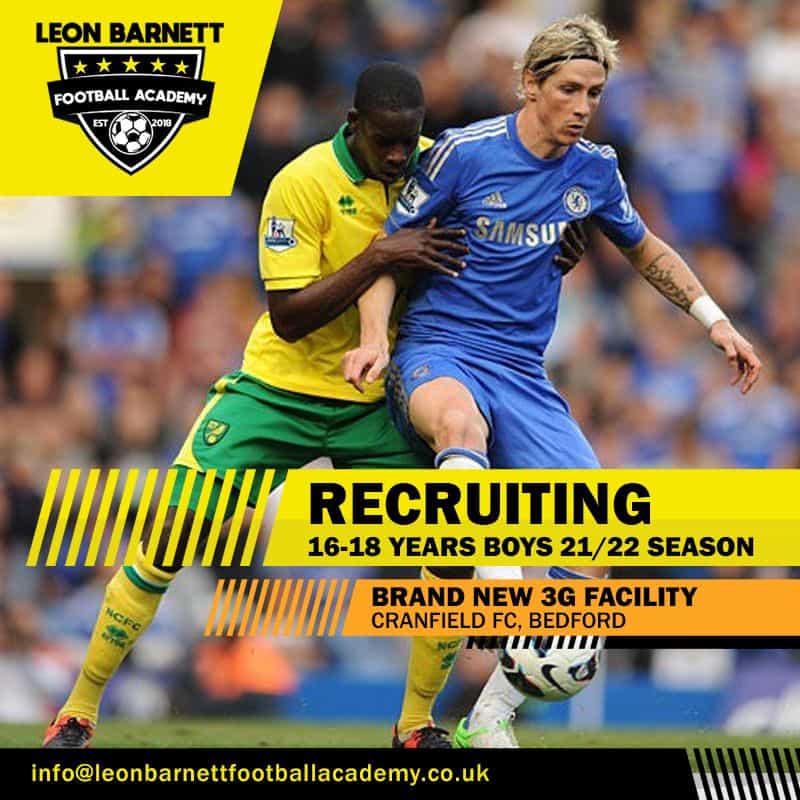