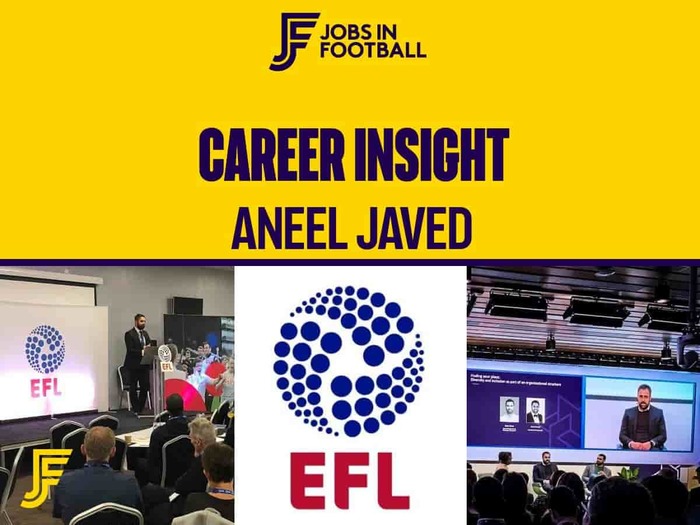 Aneel Javed is the Equality, Diversity and Inclusion (EDI) Manager at the English Football League (EFL). Having started his career as a coach in grassroots football and with experience as a board member for Kick it Out, Aneel details his experiences within the area of EDI. He also shares his advice to those looking to pursue a career within the football industry.

Aneel gives a great insight in to an important area that impacts us all.

How did you start working in the football industry?

I started as a coach working for a local authority – Preston City Council. I worked within their Sports Development Unit as a casual coach and I also worked at the university I graduated from within the sports facilities department. Previous to that, I had carried out a lot of volunteering work and for a while, I volunteered and work in the lead up to a full-time position with the council.

So I got myself into the community and grassroots side of the game, I started working with local schools around Preston – delivering after school clubs and breakfast clubs. At the same time, I went onto work with Preston North End Girls' Centre of Excellence which I did for a number of years. 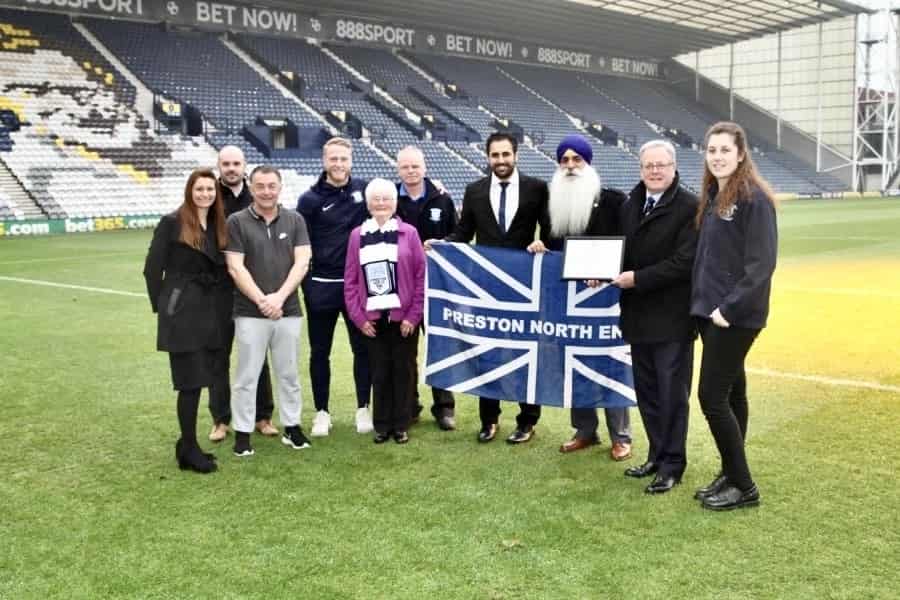 My experience then broadened into working in the sports' industry in general, so I worked within multi-sports delivery and projects around the Preston area and then with the County Sports Partnership in Lancashire. It was my first career 'desk job' as a coach, club and volunteer development position.

It was a lot of hours of volunteering and casual positions, to begin with. The volunteering started whilst I was at college and I continued through university and beyond. It was in the latter stages of my career and most recent, that I landed the role with the EFL.

How did you progress into an equality, diversity and inclusion (EDI) role at the English Football League (EFL)?

The EFL role, to some extent, was a little bit of good timing but fortunate.  They (EFL) decided to implement the role that, at the time, was the first of its kind but wasn't necessarily the first-time work in this area had been done. I was fortunate that I walked into a new role but not a new area of work as the league had been involved in EDI for some time before. The role that was created, partly on the back of the racial incidents that took place at that time: Anton Ferdinand/John Terry and Patrice Evra/Luis Suarez. It sparked a reaction in football for such issues to be addressed through a whole game plan, where all the stakeholders were involved and from this, the equality, diversity and inclusion role at EFL was created.

I like to think because I had experience within Sports Development, which centered around working with under-represented groups and those from disadvantaged backgrounds; along with the understanding I had on the relevant legislation, was the reason I was seen as the best person for the job. It has been a bonus that I can also draw upon my lived experiences which have helped me in the role.

Were you always interested in working in the area of equality, diversity and inclusion?

It was something I found myself gravitating to rather than seeking out roles. My personal background always drove me to better myself and help others.

I think starting in the public sector in sports development where you have a focus on at the community and grassroots level, there is a real focus on 'giving back' and helping others to make the community stronger. So whether that is helping those deprived areas, help someone away from making bad life choices or to nurture someone's talent there is an inherent aspect to EDI within all of it. Partnerships, collaboration and working together are important aspects to the successful delivery of projects and I think that was a key element of what I could bring to the role at the EFL and in professional football.

The most difficult part is this area is so subjective and that brings a lot of different views and opinion and the landscape moves very quickly. Football is a fast-paced environment. New challenges crop up daily, weekly and monthly. With EDI, it is about keeping pace and it is ideal to stay ahead of the curve, however sometimes it is difficult to put things in place today for an impact that might be seen in months or a number years later. As an area of work, EDI should just be a natural thread that runs throughout a business but in reality, it is a journey that sometimes can be a long process. Everybody wants impact, sometimes the demand is to see immediate impact and other times it is to see future impact and that can have a massive implication on the work which is then produced. 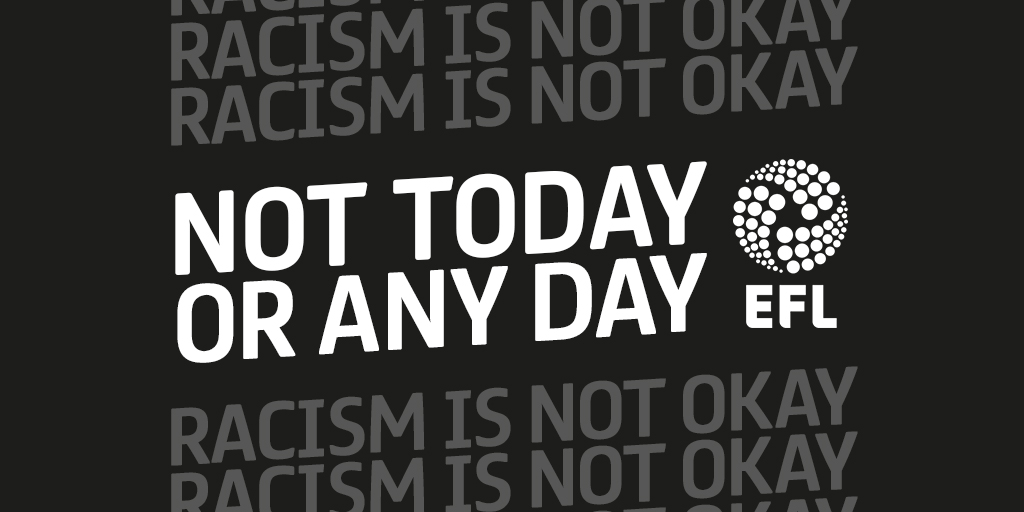 Are you ever emotionally affected by any incidents that are reported? Is there an emotional side to the role?

Yes and no. There is always an emotional response to some extent because the subject we are dealing with is very often sensitive and emotional itself. The area itself is looking at morals and every individual has their opinion on what they think is right.

I think there are certain elements that can have an emotional impact but from a professional point of view, you have to have the emotional intelligence to look at thinks objectively and to be able to make a decision on what is best, even if sometimes you don’t fully agree.

Would you say your role almost acts as a liaison between interest groups, such as Kick it Out and with the EFL clubs?

The most important aspect of my role is that you are there for the EFL and therefore, to support the member clubs. Your role is to help those clubs improve in the area of EDI and help them succeed in what they are trying to do and what the league is wanting to achieve. I think at times, interest groups have a particular focus or’ approach but they often have the expertise within that can really help and contribute to what you are trying to achieve. They often have a better depth of resource to offer as the business is dedicated solely to the cause. Kick It Out, Level Playing Field and Stonewall have become cornerstones around EDI and with mental health focal area, we’ve seen MIND in particular from an EFL point of view become part of that group but also official charity partners to provide additional resource and support.

I suppose you have to be the person of liaison to take what those interest groups are saying and measure that against the club’s position and the wider landscape in football, but they do offer amazing opportunities to campaign and show support in these areas.

People skills and managing relationships is a big part of the role.

The biggest appeal is being able to bring about changes in the industry to make it better, more inclusive and welcoming. I thrive of the challenges but you also meet some incredible people both who work in the game, in clubs and the authorities, but you also get to interact with fans, supporter groups and volunteers that work with the professional football clubs to make them the heart and soul of a community. You meet so many good people throughout the clubs and the football network that it’s infectious!

It is a real eye-opening role in terms of the people you get to meet and the work you can do to effect change, not just in individual instances but in football as a collective. You are genuinely able to help change an industry by working together.

What has been your football career highlight?

Implementing the Code of Practice throughout all of the clubs and helping them through the process has been an achievement. Due to relegation and promotion, we have helped over 90 clubs to achieve this standard and to know you have played a part in that is great. It is even better when you hear that some clubs are progressing to achieve the standards set by the Premier League, or equally, those that have left the EFL but are still continuing the work even though they are not required to do so. It shows the commitment and it makes it all worthwhile. 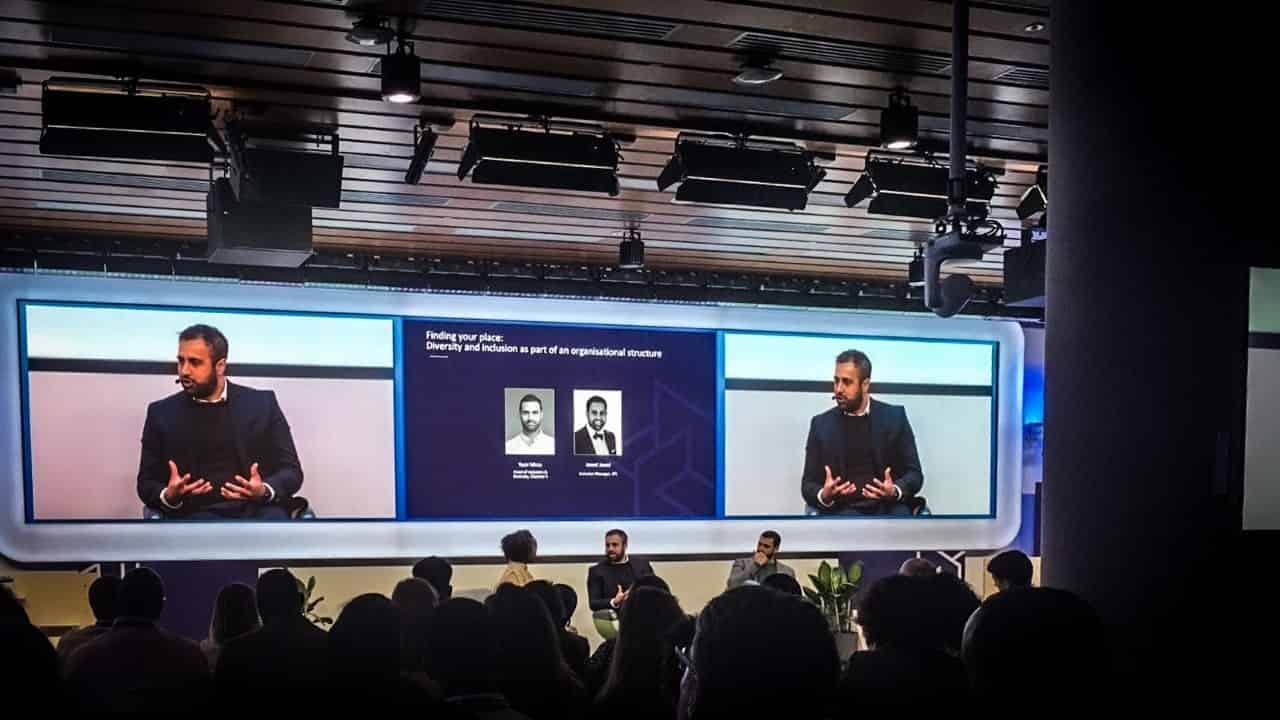 Other highlights center on individual moments, such as conferences and events. Also, the work we have carried out for underrepresented groups and communities -  who often feel that football isn’t the most welcoming environment for them - in breaking down barriers and creating a welcoming environment to see those communities, groups and individuals grow within football has been brilliant.

Are there any courses or suggested reading you would recommend?

I think because of the way the industry is shaping up, it is paramount that people have an understanding of the legislation, as well as the football industry in general.

There are a couple of universities who offer courses in and around this area and equally, there are a lot of providers who offer EDI training.

There is also a lot of literature out there but what I would say is, that while having the knowledge of EDI is great, you also have to understand how to put that knowledge into practice. So how you can bring a project to life or develop a strategy – that is really important.

I would say to persevere and keep going. It is an industry with high demand – there are a lot of people who want to work in football. Depending on what role you want to do will determine how big the demand is. Understanding how the football industry operates will really help though.

The hardest part is getting into the industry. Once you are in, there are a lot of opportunities in which to network and build your career but that initial ‘foot in the door’ will be one of the most difficult things to do.

In the immediate future, I am looking to transition into a consultancy role, still within football and with the leagues and governing bodies. 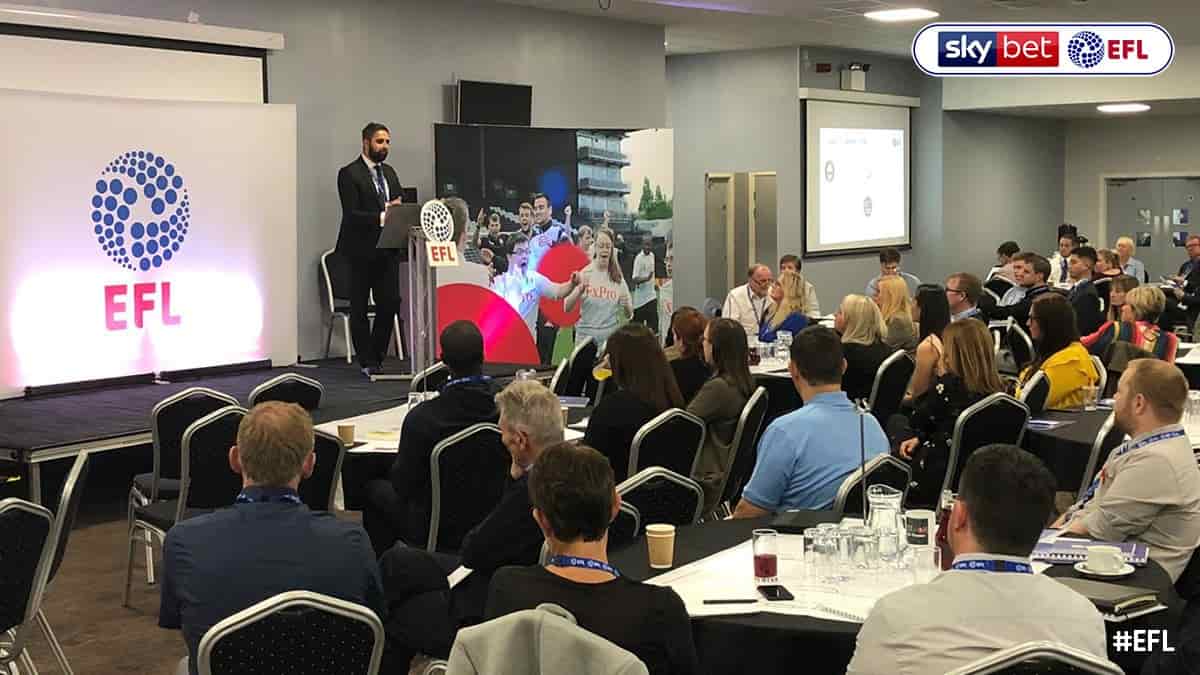