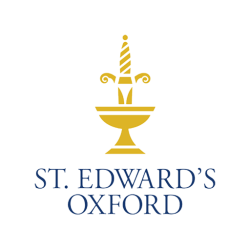 Affectionately known as Teddies, St Edward's School is a co-educational, independent, day and boarding school in Summertown, Oxford. Established as a Christian foundation in 1863, it moved to its current site 10 years later. At its most recent inspection there were 734 pupils on the school roll, aged 13-18.

St Edward's School values its position as one of the few city-based boarding schools in the UK. It has excellent transport links to London and Birmingham. Student entry to the school is via Common Entrance or scholarship examinations. The school is named for the martyred great-grandson of King Alfred.

St Edward’s School has an unremitting focus on learning and on inspiring pupils, staff and parents alike. Its ethos is that anything is possible. Teachers believe that every child has something to contribute to society, is capable of striving for excellence and has the potential to enjoy real academic success at the highest level.

The North Wall is the school's vibrant, purpose-built home for drama, art and dance activities. Since its opening, the centre has extended its reach beyond the school to become an innovative arts venue for Oxford and beyond. With an emphasis on offering alternatives to the mainstream, the North Wall's lively public programme attracts over 20,000 visitors a year to more than 100 performances and exhibitions.

One of the most famous graduates of St Edward’s in the creative arts is actor Emilia Clarke, a star of Game of Thrones.

"The quality of the pupils’ personal development is excellent, reflecting the school’s highly effective emphasis on the welfare and well-being of each individual pupil. The excellent standard of pastoral care is a strength of the school, and the sympathetic and supportive example set by the staff is mirrored in the way pupils behave towards one another."