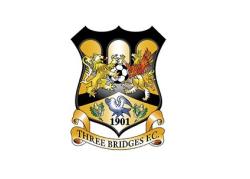 Founded in 1901, Three Bridges’ early years were based around local football in Crawley and subsequently in Mid Sussex and West Sussex Leagues. They won the Sussex Junior Cup during the 1930’s and became an Intermediate side before their first taste of Senior football as founder members of the new Second Division of the Sussex County Football League in 1952/53.

As Three Bridges United, they won the Second Division title in 1954/55, but theirs was a bit of a yo yo existence for a while before gaining promotion as Division Two runners up in 1968/69.
By this time they had a managerial structure with the likes of George Spurgeon and former Walthamstow Avenue striker Eric Hughes at the helm. They had also tapped in to local side Bridges Boys for some of the top younger talent in the town.

But they were relegated again soon after but bounced back as runners up again in 1973/74.
Another relegation soon followed but the appointment of former Crystal Palace striker Harry Easton for the 1979/80 season promised much. It hardly started well but the second half of that campaign saw them drop just one point, that against eventual Champions Hastings Town, in their last twelve games. They also lost to Hastings in the League Cup Final, but ironically it was Hastings who provided the opposition in the final game of the season at the Jubilee Field.

Only a win would do for Bridges to pip Hailsham Town on goal difference for second place. It was still 0-0 with two minutes remaining, but Bridges were then awarded a penalty. Alan Bell, who would later serve as Club Chairman for twenty years, stepped up and scored from the spot to spark wild celebrations in the home camp.

Harry Easton guided Bridges to the Fifth Round of the F.A.Vase in 1981/82 (basically the last eight before losing to Molesey, and his Assistant Alan Knight the took over and took Bridges to a six a side competition in Walsall run by Thorn EMI. Although they were well beaten in the final, their opponents Shepshed Charterhouse negotiated a deal that ended with Bridges actually winning a set of floodlights. Star of the show that day was former Chelsea, Plymouth Argyle, Crystal Palace and Reading midfielder Brian Bason, who also played for England Youth on fifteen occasions.

The 1982/83 season also saw Bridges win the Sussex RUR Charity Cup for the first time, Bobby Nash captaining the team as they beat his old side Hastings Town 3-2. The 80’s proved to be a reasonably successful time for Bridges, although they had to settle for Division One runners up spot three times in four seasons in 1985/86, 1987/88 and 1988/89. But they did win the RUR Cup again in 1987/88, beating Hailsham Town 2-1.

Bobby Nash and Steve Breach were amongst Player Managers as the club tried to move to the next stage, but relegation came again before another Division Two runners up spot brought them up again in 1998/99, and there they remained for the next fourteen seasons.
Brian ‘Sammy’ Donnelly had a great reputation around Sussex with a number of clubs, but apart from reaching the RUR Cup Final in 2003/04 (a disastrous 0-4 loss against East Grinstead Town), he had only minor success as Bridges Manager.

Paul Faili meanwhile had been Manager of the club’s Youth teams from Under 7’s all the way through to Under 18’s, and after helping with the Reserve Team, he unexpectedly found himself in charge of the front side.

A 4-0 win against Selsey in the 2007/08 RUR Cup Final was the start of a gradual season upon season improvement in League terms. A League Cup success in 2010/11 was followed by the same a year later, although this time Bridges also won the Sussex County League Championship for the first time in their history and were promoted to the Ryman Isthmian League.
A seventh place was the best they could manage in their first five seasons at this much higher standard of football, and relegation followed in 2016/17. But Paul Faili brought the side back up again at the first time of asking.

Now Chairman of the club, Paul Faili has handed over the managerial reins to former skipper Jamie Crellin, whose playing career was ruined by a particularly nasty challenge three years ago.
The club are now on a decent financial footing after suffering two clubhouse fires in the past, and are hoping to carry on the good form they showed up until November 2020 when COVID 19 finally called a halt to football at this level.