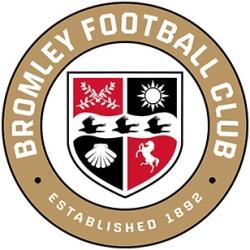 Bromley Football Club, established in 1892, is a professional football club based in Bromley in South East London, Kent. We are  currently members of the National League of English football, and play at Hayes Lane.

Bromley Football club are an on exciting journey. The Club has just had a muiti-million pound infrastructure in the stadium to make Bromley FC a sustainable business to help drive revenues so as to support football and let the club challenge at the highest level possible.

Email me jobs from Bromley FC