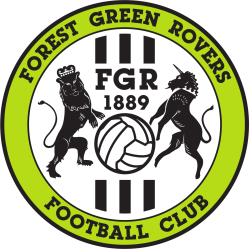 We aim to be in the Championship within the next five years – our recent promotion to League One is the second step of that journey - and we're planning to build a stadium to match those ambitions. Designed by world-renowned architect Zaha Hadid, 'Eco Park' will be the only stadium made entirely of wood.

Sustainability is central to everything we do at Forest Green Rovers. From solar panels and electric vehicle charging points at The Bolt New Lawn to our vegan menu, we are proving that sports clubs can lead the fight against climate change.

And it is working.

We’re the first and only vegan football club and the first to be certified as carbon neutral by the United Nations.

The Bolt New Lawn might look like any other football stadium, but we do things slightly differently. Here are some of the things that make us the world’s greenest football club.

Green energy – The entire club is powered by 100% green energy from Ecotricity, some of which we generate ourselves with the solar panels on our stadium roof and the solar tracker at the ground entrance.

Organic pitch – The grass we play on is sustainable, free from pesticides and weed killers.

Electric ‘mow-bot’ – We cut the grass with a GPS-directed, solar-powered lawnmower.

Rainwater capture – We collect rainwater that lands on the stadium and use it to irrigate the pitch rather than using mains water.