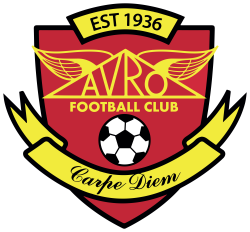 Avro FC are a semi-professional football club founded in 1936 as a works team for aircraft manufacturer Avro. The team spent the majority of its history bouncing around the Manchester amateur leagues, and were mainly based at the Lancaster Club in Failsworth. However, in 2017 the site was sold for redevelopment, forcing Avro to find a new home.

They found one at the former home of Oldham Boro and Oldham R.L.F.C, The Whitebank Stadium, which was renamed The Vestacare Stadium as part of a sponsorship deal. In their first two seasons at their new home, Avro secured back to back promotions to move from the Manchester League to the NWCL Premier Division. In their first full season at step 5 of the non league pyramid in 2021-22, they finished in sixth position.