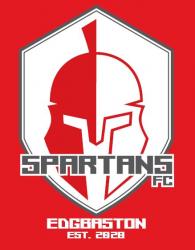 Edgbaston Spartans FC is a well-established grassroots football club based in Edgbaston area, Birmingham, UK. The Club was formed on January 2020 and is owned by two passionate about football Greek friends who have been living in Birmingham for over than 5 years. Their idea was inspired by their intention to assist in the promotion of the Greek & Cypriot sports society in Birmingham region and bring skillful football players closer to each other aiming to the creation of a well-structured, friendly and ambitious squad.

The football club has been officially affiliated by Birmingham FA and is currently running an open age First Team with over than 30No registered players. Their home ground is found at 'Hollyfields Sports & Conference Centre'' in Erdington, Birmingham. The Club’s first Team is competing in the Division 2 of West Midlands Regional League (WMRL) which sits at step 8 of the National League System or level 12 of the overall English football league system.

At present the club relies on a significant amount of volunteer time and effort to ensure its ongoing viability. However, without having the support of the club’s main sponsor 'Athina Contractors Ltd' volunteer work alone falls short of what is required to operate a Club in the demanding UK football semi-pro level arena. At the same time the club’s Management Team pursues successful and reputable businesses to consider sponsoring Edgbaston Spartans FC under various ways that would work beneficially for both sides.

The club’s expectations do not stop here; their owners have recognized the short-term need to establish a residential multi-culture Soccer Academy in Birmingham, specifically to cater for talented junior soccer players giving them the chance to develop and grow their talents. The expansion of the club over the next years will be testament to the support of many Greek and Cypriot people in and around Birmingham who are interested in taking time to contribute in many different ways, whether through coaching, contributing to the club’s committee proceedings, fundraising or simply being there on cold weekend mornings to cheer along the kids from the sidelines.