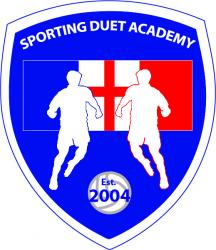 Sporting Duet Academy was established in 2004 and grew alongside London’s French Community offering curricular and extra-curricular football sessions to local schools. Now with over 1,000 registered players, the Academy has grown from strength to strength, delivering after school football sessions throughout the week, including Saturday League and Sunday Elite League football, as well as the Goalkeeper’s Academy, football birthday parties, Football Camps in London and tournaments abroad during the season.

The Academy has built up a reputation for being one of London’s best multi-national football clubs at developing young talent and providing quality coaching in a safe environment. The Academy prides itself on its fully qualified, multi-cultural and diverse team, and welcomes children and young adults of all nationalities and backgrounds, of both sexes, and of all abilities between the ages of 5 and 18 years of age.