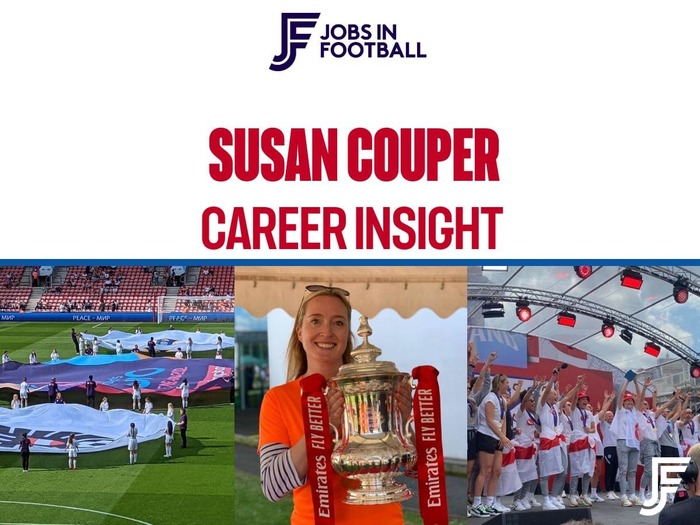 For over 6 years, Susan Couper has worked as Senior Recruitment and Volunteer Manager at the Football Association (FA). A Senior Management Team member, she plays a crucial role in tournament delivery, having helped organise both the Women's Euro 2022 and the delayed Mens' Euro 2020 competitions. Previously, Couper worked in investment banking recruitment, before making the transition into sports by joining the London Olympic Organising Committee, and later England Rugby. I caught up with her to talk about organising the Women's Euros, Sarina Weigmann's inspirational Lionesses team, and the FA's work to grow the women's game in this country.

You're currently working as FA Senior Recruitment and Volunteer Manager. What does that role entail?

"I joined the FA back in January 2016 as their in-house Recruitment Manager. When I first started, I was recruiting anything from the receptionist, finance, IT, and commercial teams, through to recruiting in all the technical and football teams — coaches, nutritionists, physicists — to working with Gareth Southgate to recruit his team. In 2018, I was asked if I was happy to go on a secondment to UEFA to head up their paid staff and volunteer staff for the Men's Euros in 2020. Since 2018 I've been focused on what we call Tournament Delivery, with the Men's and Women's Euros. Now that the Women's Euros is all done, I'll be transitioning into the bid team for hosting Men's Euro 2028." 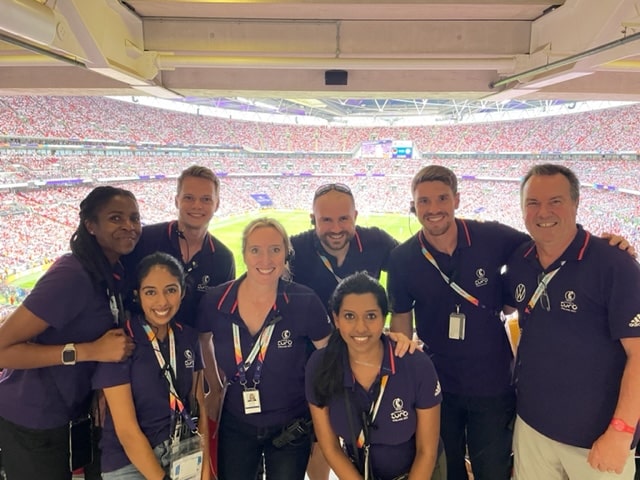 What does Tournament Delivery involve?

"It's really multi-faceted. You need to make sure the teams have got the right training bases and facilities, and team hotels, you need to make sure they've got the right kind of travel plans in place depending on how they progress through tournaments. You need to ensure security, accreditation, transport, not just for teams but for spectators, and movement not just internationally but across cities as well. The host city programs, making sure the cities are prepared and dressed and look and feel the way that they need to. I could go on and on…"

How did you first begin working within the football industry?

"I started my career off in investment banking, working within graduate recruitment. Straight out of university I became part of a graduate recruitment team at an investment bank, where I was recruiting about 300 graduates and 200 interns a year, trying to attract the best graduates from the best universities. Then in 2009, I was approached about a role working on London 2012 for the Organising Committee of the Olympics and Paralympics, within their volunteer recruitment team. At the time I was a bit like, why would they want to speak to me? Graduate recruitment and volunteer recruitment? But actually, the cycle of recruiting volunteers, graduates, experienced hires, or CEOs is always pretty similar, you go through the same cycles."

"After London 2012 I went and worked for the 2015 Rugby World Cup, and then over to the FA. I've worked in a number of different sports, and I think the more you work in it, the harder it is to not become a sports fan. I wouldn't say I'm a big football fan, but sometimes that helps, especially in the FA Recruitment role, because you might have a time where you're sat next to Gareth Southgate or Sarina Weigmann, and not being a fangirl or fanboy actually helps, because for me it's just another candidate, and you treat them the exact same way that you would any other."

The women's game has changed dramatically in this country over the past few years. What key developments have you seen?

"I think things are always improving, and we've seen huge investment in recent years. When we started planning the tournament 4 or 5 years ago, the budget and resource that was behind the project was significantly different to where we've landed now. The way that the women's game has grown in recent years, quite rightly, has borne that extra investment, so we were able to deliver a women's tournament to a much higher standard than we would've if we'd had to have organised this event 10 years ago, whereas men's football has always had a lot of money in the game, and would've always had huge backing."

At  the start of the tournament, some players and pundits criticised the inclusion of several smaller-capacity venues in the Euro 2022 stadium line-up. Were you involved in the stadium selection process?

"I wasn't personally involved, no, but it was interesting that we had that coverage at the beginning of the tournament, but the players themselves, when they played at the likes of the Manchester City Academy, which had our smallest capacity for spectators, they were then only saying positive things. They could see why we'd picked some smaller stadiums, and that it was better to play in a packed-out smaller stadium than a not-so-full big stadium. In hindsight, would we have gone anywhere different? I'm not sure we would. Man City Academy was a great venue, and they put on a great show. As you saw across some of the bigger stadiums, and Wembley in the final, I think regardless of who was playing, the stadium would've been packed out, because the whole country got behind the tournament. But I think it was great to have a variety of different stadiums right across the country, and I think the story turned around by the time we got to Manchester City Academy and played there." 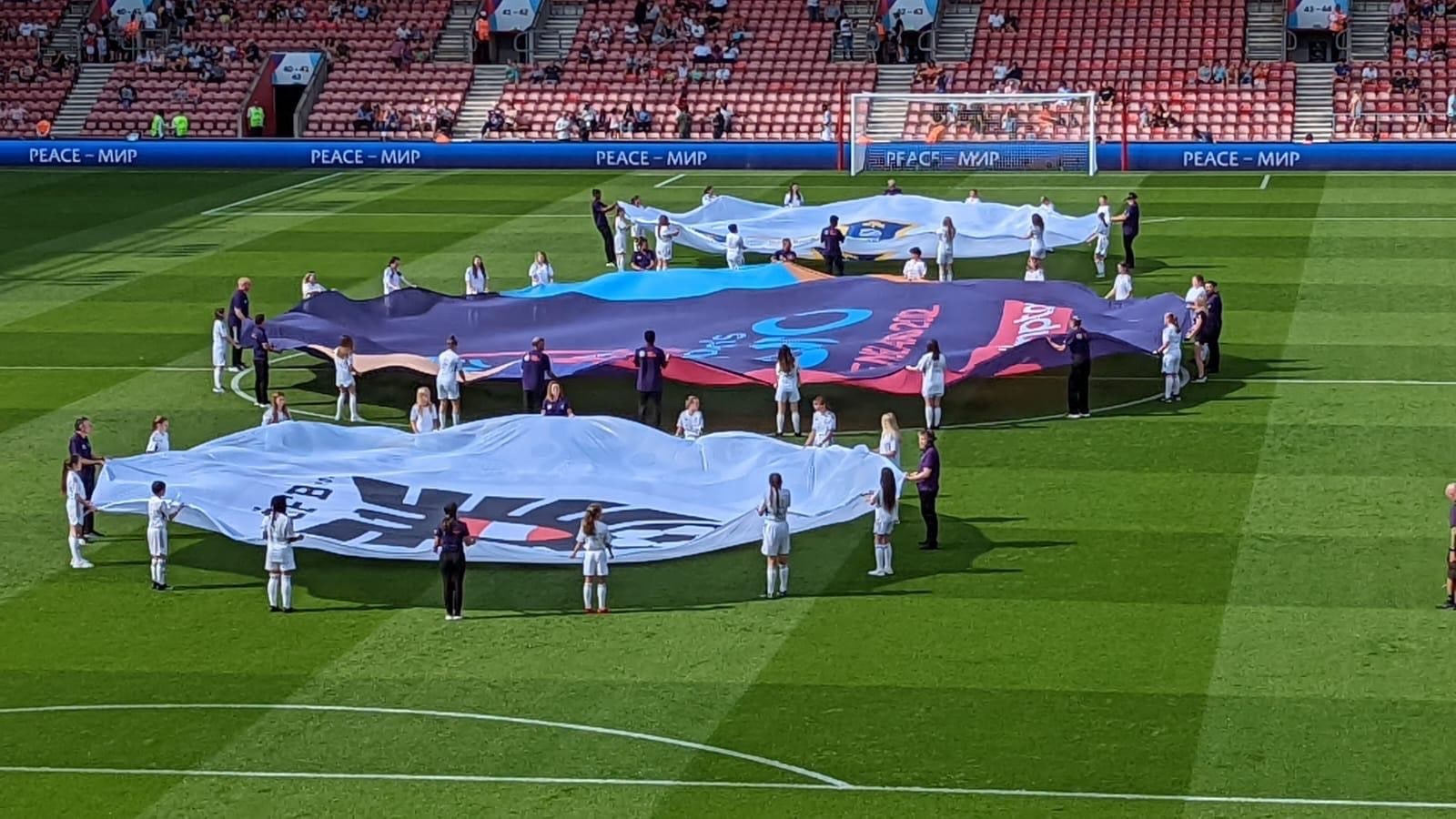 What was it like being involved in the delivery of a tournament that led to such massive success for England's Lionesses?

"I think when you're working on the tournament and you're in the thick of it, you're so absorbed in the tournament operations that you don't have the headspace to worry too much about how your own national team are playing. You're delivering the tournament on behalf of UEFA and all the 16 participating teams, not just the one you're secretly supporting! It's only really when you get to the semi-final and obviously the final that you become acutely aware of the impact it's having on the country and how excited everyone is about it, and how everyone had got behind the Lionesses. But for me personally, working on the day of the final, you don't get to see a second of the football. It was only really in the last 10 minutes of extra time that I personally got a glimpse of what was happening, and realised we were on the edge of something pretty epic and pretty historic. And in the days following, you realise the enormity of what the Lionesses were able to achieve. The way they come across, the team ethos they seem to have, and what Sarina has done for the team is amazing."

It seems like a lot of that bond they have comes out of struggle, right?

"Yeah, especially when you listen to the more senior players. You see what Jill Scott's saying, you hear what Alex Scott's been saying throughout her commentary. There were so many years of struggle, and trying to play in front of big audiences, and then they get to the final at Wembley and it's absolutely packed out and the whole country's going wild. It's pretty special. And whether it's young girls, or friends my age, in their 40s, now everyone's asking how they can get involved in women's football, if there's a local team they can go and play for — it's unheard of. Everyone now wants to be a Lioness." 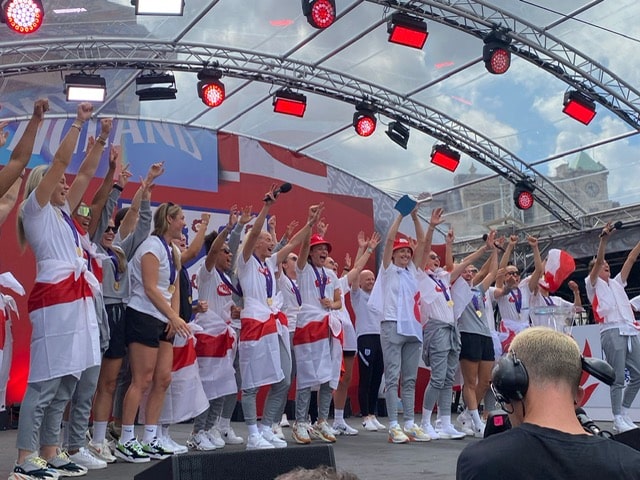 Walk me through the day of the final. What did your working day look like?

"A lot of our role within Volunteer Management is to ensure the welfare of our volunteers and make sure they're having a good time. We'd pop in and make sure they've been given the gift of the day (handed to all volunteers each matchday), which could range from a match program to a chocolate bar or a key ring. Late morning is when the bulk of our volunteers arrive, around 200 spectator services volunteers. They do the role of meeting and greeting spectators outside the stadium, helping ensure spectators have a great experience and make the difference between a normal matchday and a women's Euro Final. It was a carnival atmosphere. Everyone was happy to be here, and it helped that the sun shone as well."

"By the time we got to kick off, volunteers whose roles had finished were able to come back to the volunteer centre and watch the game, which was amazing because typically volunteers sign up knowing they're not going to be able to watch games. Then just before the final whistle, we got all the volunteers back out on the footprint so that as the spectators leave, they get a great farewell and send-off before they go home."

"Since I joined the FA in 2016, what the FA has done to support the women's game is massive, and I've been here to see the journey of where women's football has gone. The fact that the Women's Super League is fully professional and so accessible to watch on mainstream TV, it's on a whole different level now. And the recruitment we've done internally to support the women's game is huge, compared to when I first joined. I think the Women's Euros will be a catalyst for getting more and more people into women's football. I saw a stat that off the back of the win, the demand for Women's Man City tickets has gone up 3000%! The general public are wanting to get involved in the women's game, and the FA's long-term plan is there. It's just gonna continue to get bigger and better. I think Gabby Logan said it last week: this is just the beginning."