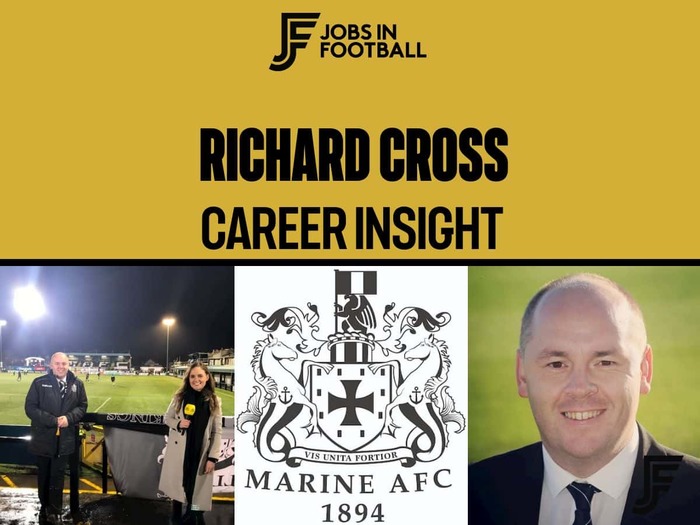 Richard Cross is the Club Secretary of Marine FC. From managing a busy workload of player administration, to implementing new Covid-safe protocols, Richard kindly took time out from his full-time job to share details of his interesting and varied role.

And of course, he discusses the magic of the FA Cup!

When did you start working for Marine FC and how did that opportunity arise?

I first attended a game 25 years ago when a neighbour of mine gave me a free ticket. For a few years I attended fixtures as a supporter, but I then started volunteering in the club shop and at the ground, as well as producing a few pages of content for the matchday programme. I ended up joining the Supporters’ Club Committee, followed by the Management Committee in 2006. In 2008, I became Football Secretary and eventually in 2010, I became the Club Secretary.

For those who may not be aware of the experience that can be gained from non-league football, what would you say to them?

I would say ‘Just go for it!’ You may have an ambition to work in a higher league but at non-league level, you are still liaising with the relevant football bodies and working to the rules of the FA. It is important to remember that non-league football would not be able to operate without the dozens of volunteers that put in hours of hard work for the love of the club.

Non-league football is also a better standard than perhaps some people think and it gives you the opportunity to learn key skills that can help you in your day-to-day life.

Marine had a fantastic run in the FA Cup this year. How did it feel to be a part of that journey? What impact did that have on your role specifically?

It was an amazing experience for everyone at the club and something we never imagined would have happened, especially after being 1-0 down in the preliminary round against Barnoldswick Town. There were only minutes to go in that fixture so it was complete elation when we won the game.

What has been particularly nice for us is that, in a time in which the world is unfortunately suffering with the terrible coronavirus pandemic, we have received numerous letters and emails from people telling us that our story has lifted their spirits. It has been humbling to know that at such a challenging time, people around the country have taken the time to contact us to say it was a pleasure to watch our team on Match of the Day.

As a non-league club, we are classed as non-elite and therefore, the season has been postponed. However, for the FA Cup competition, we were given elite status to train, host and play fixtures.  We adhered to the protocols implemented by the FA and of course, formed our own bubbles between the players, coaching staff, officials and directors.  It was incredibly sad that supporters of both sides were not able to join us for the last 4 games in the competition. However, we could still feel their support watching us from their homes.

In regard to my role, there were new protocols that I had to consider and ensure the club adhered to, along with involvement in video conferences with the FA medical teams and Tottenham Hotspur. There was also a general increase in workload, which expectedly, came with hosting a Premier League club.

Finally, there have been a lot of media enquiries that I have managed - we have received enquiries from all over the globe. The FA Cup success has certainly put Marine FC on the map! 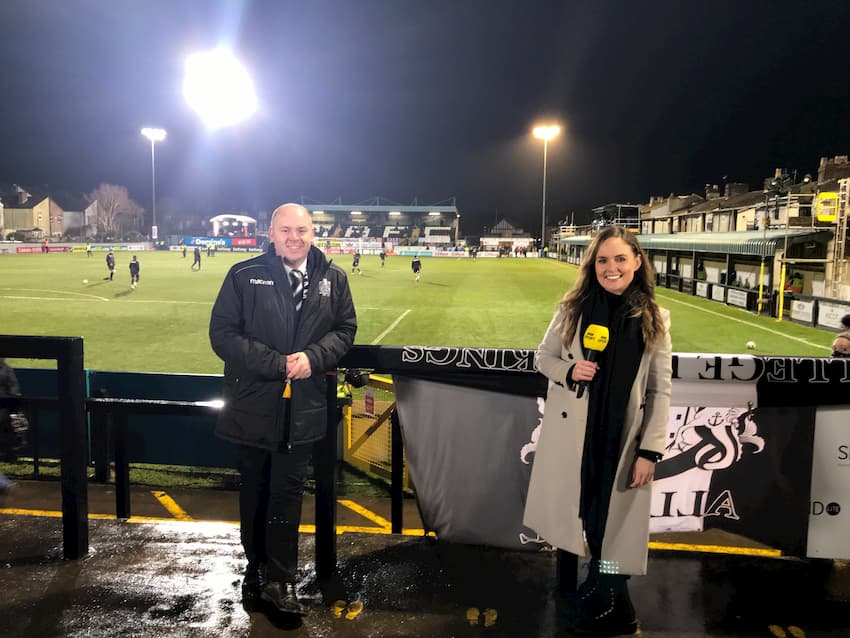 Richard with Kelly Somers on Match of the Day Live

How has your role adapted during the pandemic? What challenges has that created for the club and your role specifically?

As mentioned, we have had strict protocols to adhere to during the pandemic.  For each game played this season, whether it be in the league or for the FA Cup, we have taken full details of everyone in attendance at the premises. For supporters, this information has been captured via our ticketing system. However, for players, coaching staff and directors of both teams, I have had to produce a list with full details to ensure we comply with the rules of test and trace. This record has also included media representatives, the match officials and any scouts in attendance.

I have also been involved in the working group which was set-up to manage certain operations, such as making our clubrooms and stadium COVID-19 secure. My specific tasks have included managing site visits with contractors for items, such as floor markings, safety screens and sanitisation units. For the game against Spurs, we  needed two COVID-19 testing sessions too which I was involved in organising. I also had to be tested because in my role, I require access to the pitch and dressing rooms. Again, this was a requirement to comply with the FA protocols.

Covid has devastated so many lives around the world and as a club, we have changed the way we operate on a matchday, as well as the operations of our clubrooms when we were briefly allowed to re-open. It has taken time, effort and teamwork but we are confident in saying that we are Covid-compliant.

What skills do you believe are most important in fulfilling a Club Secretary position?

The role of the Club Secretary is an important part of the club function and there are many administration tasks involved. A lot of the administrative tasks have deadlines attached to them and you have to ensure that what you deliver is accurate; there is potential for fines to be imposed by the governing bodies.

I would say excellent IT and administration skills are essential, although once you have been doing the role for some time, you do get into a routine. For example, you soon learn that you have to confirm a fixture a week prior to the game and that you have a deadline to send through programme information. Further examples are knowing when to complete and submit the team sheet to the referee, plus all of the post-match administration.

Verbal and written communication skills are also key because you are liaising with several personnel and stakeholders, such as representatives of opposition clubs, match officials, the league and the FA. As Club Secretary, you are the sole communicator between the club and the external bodies.

You also need to be highly organised to ensure that important details are not missed and that all tasks are completed on time.

I would also say that teamwork and interpersonal skills are important as they help you to communicate with colleagues and improve the efficiency of completing a task.

For me, I believe that my problem-solving skills have been tested this season because of the new protocols.  With that said, you need to be able to work well under pressure, work to deadlines and have the ability to prioritise workloads.

Finally, you need to have discretion when handling and processing confidential information – that is really important.

What does a typical day look like as Club Secretary at Marine FC?

It depends on the day and the time of year.  People often think that summer can be quiet. However, this is the time of the year I am most busy; completing licence applications, FA and league memberships, ordering kit etc. Then there is the processing and compiling of player registrations and contracts. 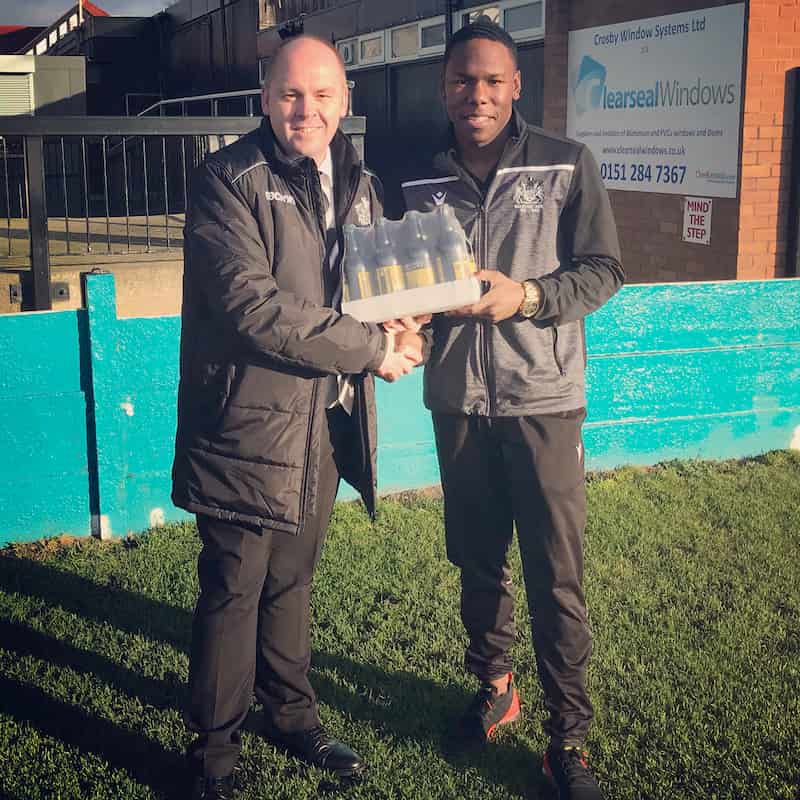 Presenting Player of the month award to Josh Solomon-Davies

During the season, a typical work day would include responding to emails and phone calls from the FA and league, as well as the correspondence from supporters and suppliers.  For a matchday, my workload is greater and tasks include: completion and submission of the team sheet (to referee and opposition); sending the result information to the relevant bodies post-match; and the submission of the team sheet and applicable reports to both the league and the FA.

There are certain weekly tasks that need to be completed and I have to manage this alongside my involvement with the general operations of the club.

The most enjoyable part is seeing success on the pitch. A lot of hard work goes into the administration and submission of players’ contracts and registration forms, including the work with discipline and clearance, that when there is success on the pitch, it’s nice to know that you played a small part in that.

One of the most difficult parts of the role is ensuring that when a new player joins the club, he is fully eligible to do so. It’s not as easy as simply submitting a registration form; you need to ensure the player has no outstanding discipline record from either the FA or County FA. Such a record, could mean that he is ineligible to play. You also need to check that the player has not played abroad. This includes whether he has played in Wales, and given our location, there are players who look to move between Wales and England.

There are also strict deadlines for registrations and these must be met. Sometimes it’s a race to the line to get there but it’s rewarding and satisfying when I am able to see it through.

What has been your career highlight to date?

Reaching the third round of the FA Cup this season was a fantastic achievement for us all and certainly my career highlight to date.

This season has had so much uncertainty with late starts and pauses, but we have been able to have a strong FA Cup run. Couple this with the fact that it has been enjoyable to work together as a group of volunteers, it has been great. To see and be a part of the team that assisted in Marine hosting the game against Tottenham, was such an achievement. There was a lot of planning and preparation involved, as well as coordinating with Tottenham Hotspur, the FA, Merseyside Police and Sefton Council. It has drawn us closer together as a club and we are all delighted that we were able to successfully stage such a big fixture. 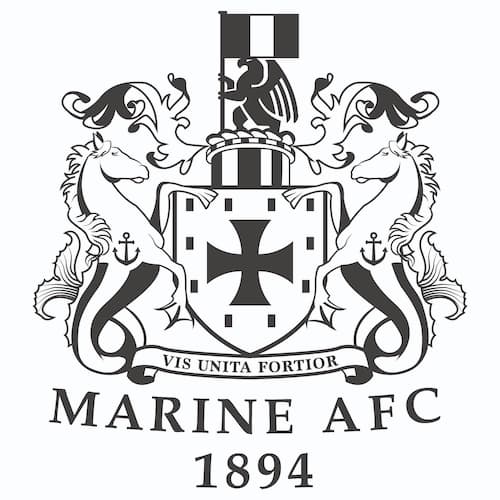 Never be afraid to volunteer for a role within a non-league club because it is likely that you will be welcomed with open arms. You will also have other volunteers to support you, plus counterparts around the country who can help.

It may seem like a challenge when you first approach the role or specific task given to you but there will be somebody who can help you through it.

And finally, where do you see your career in the future? Are there any personal goals that you hope to achieve?

It’s to continue with my role and to assist where I can with the off-field success of the club. I will also work hard with the manager and his squad to try and get on-field success and hopefully work our way up the non-league pyramid.

I never imagined that turning up to see a game 25 years ago would lead me to where I am today, but I am proud of my achievements and in knowing that some of my work has helped Marine FC to achieve success in recent years.